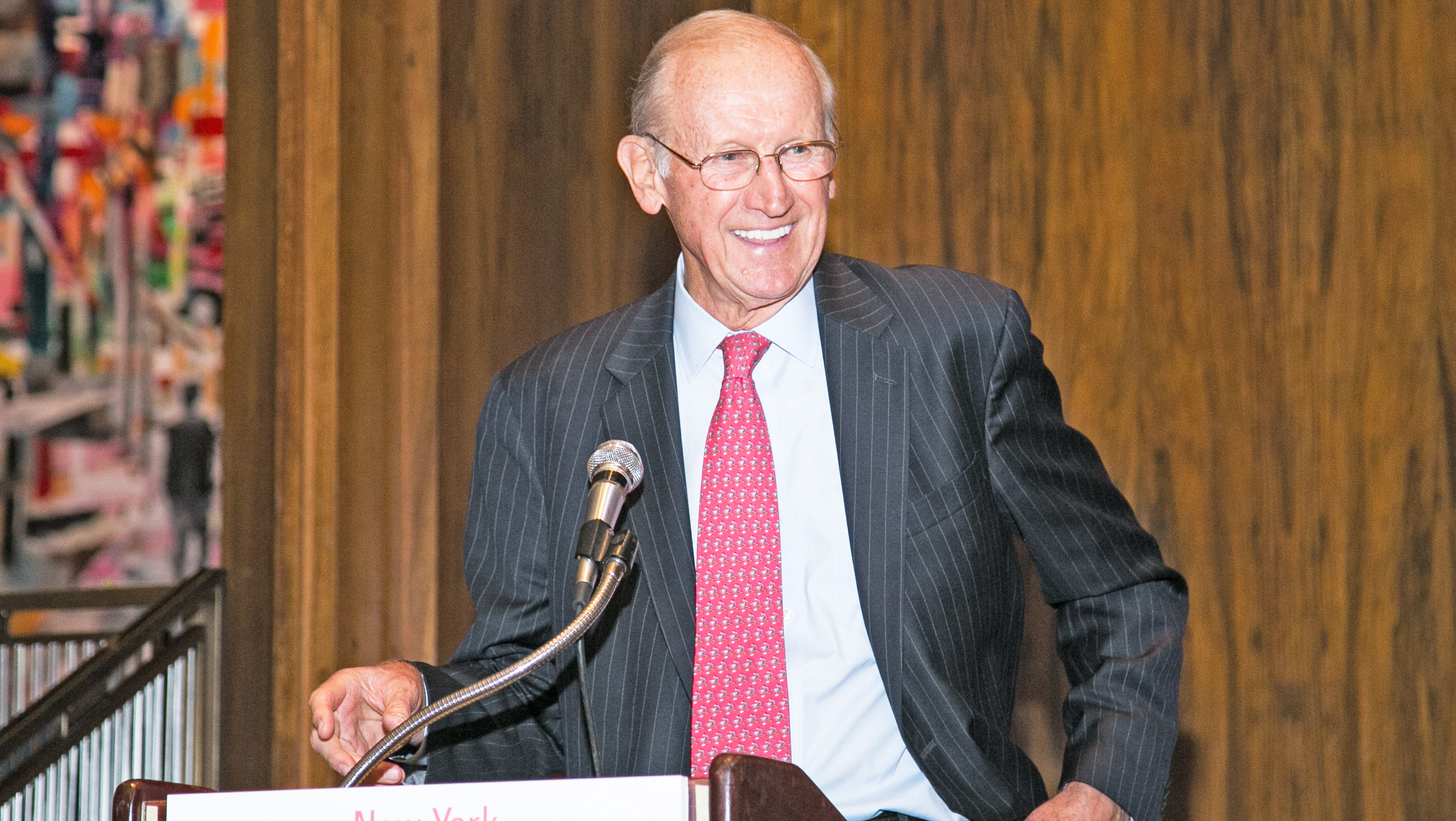 In 1994, Rudy Giuliani had just beaten incumbent New York City Mayor David Dinkins, unemployment was at over 13 percent and Staten Island was threatening to secede from the city. It was also the year Richard Anderson became president of New York Building Congress.

“1994 was still a tough year for the industry,” said Anderson, who will retire from his full-time role at the Building Congress on Dec. 31.

“We had not yet emerged from the recession of the late 80s and there was high unemployment in the building trades – we hadn’t built a new office tower in New York for the previous five years. Crime was high, there was uncertainty about the city’s future and the construction market only generated $10 billion in activity.

Indeed, as he prepares to step down from a role that has defined his career in the construction sector, Anderson – who goes by Dick – has a lot to be satisfied with.

He has been credited with turning a once ineffective and random group of builders and owners into one of the most respected real estate organizations in the city with a powerful membership whose not insignificant weight has been felt in issues ranging from public transit spending to the re-zoning of a city striving to keep up in today’s fast-moving world.

He has managed to accomplish this by striking an unusual balance as a mediator between the them and us of New York development – the builders of the skyscrapers and their owners – and the state and federal government.

“There is much more that we agree on than disagree,” said Anderson of his constituents and their regulators.

“Working with the government can be a true partnership and we try to be a supportive, constructive critic and to have an open discourse about what’s best for the building industry from the standpoint of both the public and private sector.

“We have kept that balance by emphasizing what we agree on, hoping to convince them that we should work together with common objectives.”

Born in Brooklyn and raised in New Hyde Park, Anderson’s high school lacrosse skills got him a ticket to Rutgers University where he initially studied engineering, an occupation prevalent in his family but one which he admitted he “just didn’t like, so I went into urban planning.”

He earned a master’s in regional planning at Cornell and went to work for the Regional Plan Association, first as a planner and ultimately becoming president of the non-profit. Apart from two years in Dallas preparing capital improvement programs, he’s spent his entire working life in New York City.

“The reason I took the job [with NYBC] was really because the industry is huge,” he reflected on his years at the Building Congress office, which is headquartered in a non-descript B- building on 28th Street in Chelsea.

“If you count everyone who has something to do with the building environment, you are talking about 25 percent of the economy – design, construction, ownership – taken together, it’s a big industry.”

Back in ’94, Syska Hennessy principal John Hennessy was the chairman, BTEA leader Lou Coletti had just left the presidency for a job with Lehr McGovern and Brookfield’s Robert Selsam was on the NYBC board.

“Back then, NYBC was a 73-year-old organization that had a wonderful concept of bringing together all sides of the design, construction and real estate business. It had a core group of supporters, but was in a weakened position. Membership was modest, finances were precarious and its stature in the city was limited,” recalled Anderson, who immediately set about righting the finances through a series of conference events that pre-date the inventory of activities that proliferate the industry today.

“We organized some really good events that the industry was willing to support. We didn’t go around begging everyone for their dues. The strategy was to finance the Building Congress much more through event income than membership dues.”

As the industry began to sit up and take notice, Anderson created a new network of committees focused on “mission specific” areas, including environment, women’s issues, transportation, energy and public procurement. The charitable New York Building Foundation, which had been founded in 1998, built a purse that has proven invaluable in times of crisis for members – such as post 9/11 and Hurricane Sandy – and in funding scholarships through an ACE Mentor Program. The Congress also created its own Political Action Committee and began to generate the most concise market reports available in the sector.

“The research reports we do have turned out to be a wonderful legacy for the Building Congress,” said Anderson, crediting economist Regina Armstrong for her work. “We are the organization that the industry turns to for information about what’s going on in the market.”

Today, the NYBC has a $4 million budget and 450 member organizations and Anderson has been charged with passing the mantle to his successor, former Brooklyn Chamber of Commerce president and CEO Carlo Scissura who will take the reins Jan. 1. He will remain as a part-time consultant for the next three years and plans to spend some of that time building an archive with NYU Schack Institute of Real Estate.

“We have boxes of material going back 100 years,” said Anderson, who has decorated his office walls with photographs of the many prominent individuals with whom he has worked, from Port Authority boss Patrick Foye to Governor Andrew Cuomo, Hillary Clinton to Donald Trump and everyone in between.

Mike Bloomberg was mayor for more than half of Anderson’s 22 years at the Building Congress and he is effusive in his praise for the billionaire businessman. “He is an extraordinary guy. Not the greatest mayor we have had, but the greatest I ever had contact with. I always had a great relationship with George Pataki. He was a pleasure to work with. We were very fortunate to have these two to work with.”

State Senator Chuck Schumer is another New York champion he credits with helping build today’s New York and the late labor boss Ed Molloy was his favorite adversary. “Working with Ed Molloy was always a challenge. He represented his members very well. I never quite was able to convince Ed that we fully represented the interests of labor as well as management, but he was a friend and colleague that I admired.”

He also paid tribute to Gary LaBarbera, the current BCTC president, and Marilyn Jordan Taylor, an architect and urban designer and the only woman to ever head the organization.

“Whoever runs the MTA and the Port Authority is also important to the Building Congress,” Anderson added. “We have had some good people there, too. Dick Ravitch, Bob Kiley, now Tom Prendergast. These are very important positions for this industry.”

Anderson plans to support his successor as he fine tunes his own strategy for continuing to promote infrastructure investment in New York City, the role of the Building Congress at its most basic as it labors to generate work for the design and construction industry.

He’s convinced the NYBC has picked the right man in Scissura. “My advice [to Scissura] is to emphasize the value of member participation; when members are involved they renew their membership – I think he knows that, he has had such success with the Brooklyn Chamber of Commerce.

“He is going to inherit an excellent staff that knows what works, and he brings all of his instincts, ideas and contacts to the position, so I think we have got the best of all worlds.”

There are a myriad of issues for Scissura to keep an eye on, from the massive Gateway Project that will increase track, tunnel, bridge, and station capacity, eventually creating four mainline tracks between Newark, NJ, and Penn Station, New York, including a new, two-track Hudson River tunnel, to the rezoning of Midtown East and the continued development of the Hudson Yards.

One issue Anderson is particularly concerned with is workforce development and the lack of skilled tradesmen and women entering the industry.

“A lot of senior people are retiring and skilled positions that are urgently needed are not being filled in sufficient numbers with quality people,’ he said. “ There are many reasons for that – one is emphasis on a college prep curriculum in public schools to the exclusion of careers in technical education; The growth of non-union activity which doesn’t have the benefit of the skilled apprentice programs conducted by unions; the relative attractiveness of other fields to the detriment of the building industry. Occupations people like to go into are investment banking, accounting, legal; Emphasis on getting women to join the building trades, but they are pushing uphill – it’s tough for women to be on a job site, it’s tough for men – some of these portable toilets are memorable. There are no shortage of challenges.”

As for himself, he expects to have more time to spend with some of his six grandkids and wife Anne, whom he met on a blind date in Manhattan and has been married to for 46 years.

One thing he doesn’t expect is to improve his golf score. Every July the New York Building Congress hosts what has become one of the most attended golf events on the real estate circuit at the Westchester Country Club.

Anderson faithfully competes every year and gets in extra rounds at his vacation home in Florida. But his handicap has never budged from 24. “I am happy when I break 100 on a tough course,” he admitted.

As he contemplates those greens, those around him are paying tribute to the work he has done. “Dick Anderson is a distinguished leader of our industry and a steadfast ally of The Real Estate Board of New York” said John H. Banks, III, REBNY President.

“As President of the New York Building Congress, he has been a strong advocate for pro-growth policies, smart development, and good jobs. Throughout his career, Dick has helped to make New York City a better place to live, work, and raise a family.”

Richard Cavallaro, Skanska CEO and current Building Congress chairman, said, “For more than two decades, Dick has served the Building Congress with wisdom, honesty and integrity, and our industry owes him an enormous debt of gratitude for his dedication and support. Over its 95-year history, the Building Congress has never been more effective or more relevant and respected than it is today. Dick has and continues to be the driving force, and we are thrilled he will continue his service as President Emeritus and an invaluable consultant.”