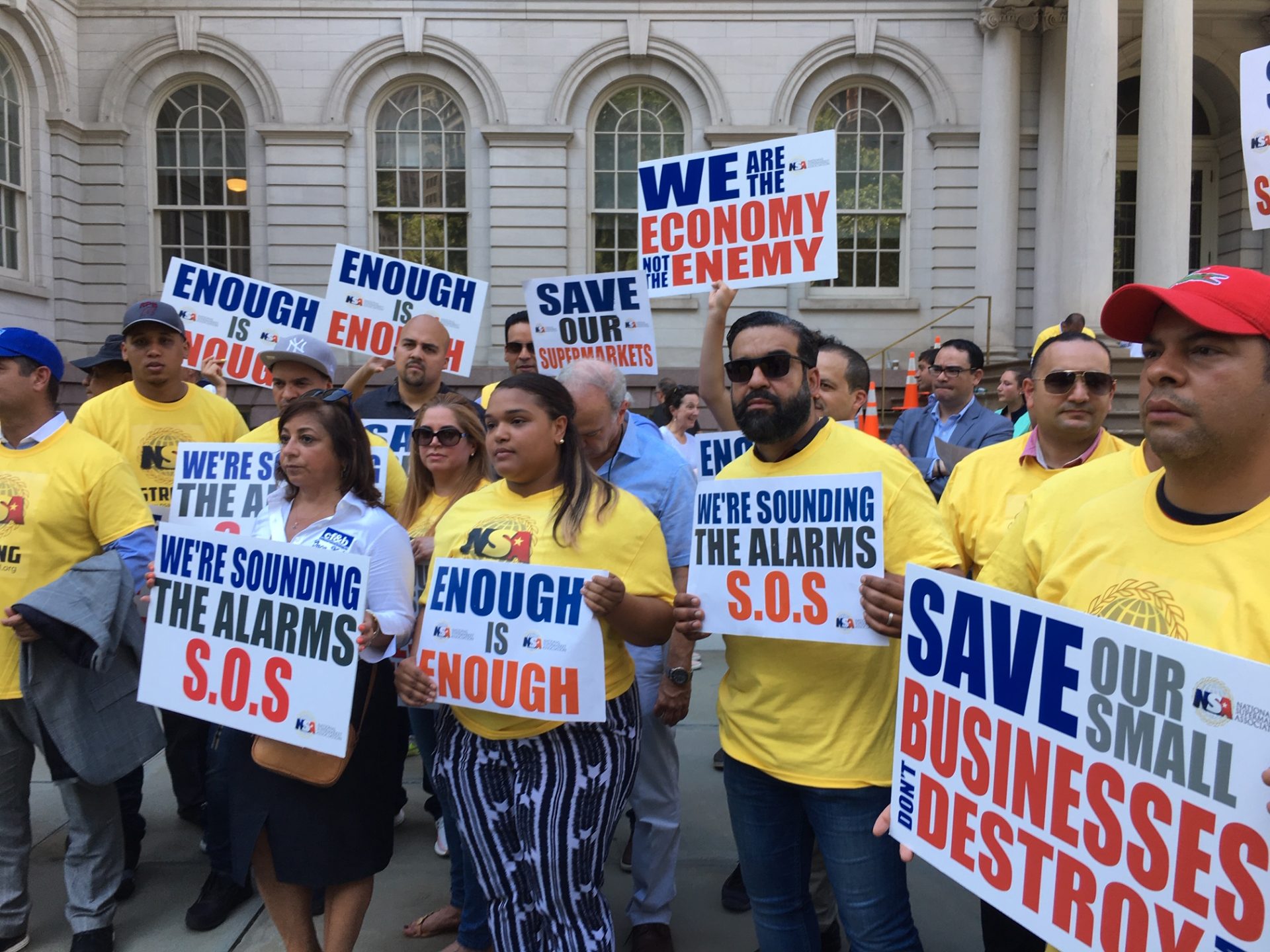 Just weeks after the state imposed the strictest apartment rent regulations New York has ever seen, some retailers are now calling for their own rent protections.

They want to be able to secure an automatic 10-year lease renewal under the Small Business Jobs Survival Act and are urging the city to re-think some of the regulations they claim put a stranglehold on mom and pop retailers.

“We want regulation reform,” said Andrew Rigie, executive director of the Hospitality Alliance, which represents the interests of restaurants and nightlife establishments in the city.

“There’s a lot of talk about loving small businesses. Enough talk, we want action. Look at any neighborhood and you will see vacant spaces lining the street.”

“We should not force small business to increase payroll costs if we don’t also talk about lowering rents and taxes,” added Natasha Amott, owner of kitchen supply store Whisk.

According to Amott, she was forced to close two of her three shops because of “exorbitant” rent increases and property tax hikes.

The rally (pictured top) was intended to focus on burdensome rules and fines imposed on small businesses by the city, but wound up turning into a free-for-all when protesters took turns airing their frustrations on regulations, soaring property taxes and rising rents.

They railed on big box competitors, chains and Amazon and more than a few store owners blasted a pending city plan to mandate two weeks vacation pay to employees.

Many speakers blamed Mayor Bill de Blasio — who was in Miami at the time for his first presidential candidate debate — for their long list of grievances.

Calling for the passing of the Small Business Jobs Survival Act, Council Member Bill Perkins said, “Rent is the biggest killer of small business in New York City and the SBJSA is the solution.”


The Real Estate Board of New York has joined a coalition battling the introduction of commercial rent regulation through the Small Business Jobs Survival Act that would guarantee commercial tenants who are fully compliant with the terms of their leases an automatic 10-year renewal option.

“Commercial Rent Control ignores market conditions and would hurt the economy,” said REBNY president John H. Banks announcing the coalition. “We hope any legislation put forward by the City Council to purportedly help small businesses will be legal, based upon data and not anecdotes, and actually create jobs for small businesses rather than perpetuate the endless government regulations and laws that are an ever-increasing burden to small business.”

According to Adelaide Polsinelli, vice chair of investment sales at Compass, retailers have the upper hand in the current market.
“There’s a lot of inventory they can choose from,” she said. “This year, you probably have 20-30 percent more opportunities for tenants than you did last year. You see more vacancy and that means you have a lot of options. Landlords are bending over backwards to secure tenants.”

“The market will find its equilibrium if left to the natural forces – this is a fundamental concept of a free market economy. As we are now seeing, retail rents have adjusted to the current market conditions, by coming down. There are more availabilities in prime areas that are affordable and provide options for tenants to secure better rents in better locations than in recent times.”

Polsinelli said she also believes mom and pops shouldn’t knock chain stores, noting that they could help bolster the city’s retail sector. “When I shop on Amazon, I return it half the time, because it’s not what I wanted. We should beg chains to take spaces. I like my Jamba Juice. I like my Starbucks. A chain is better than a vacancy.”