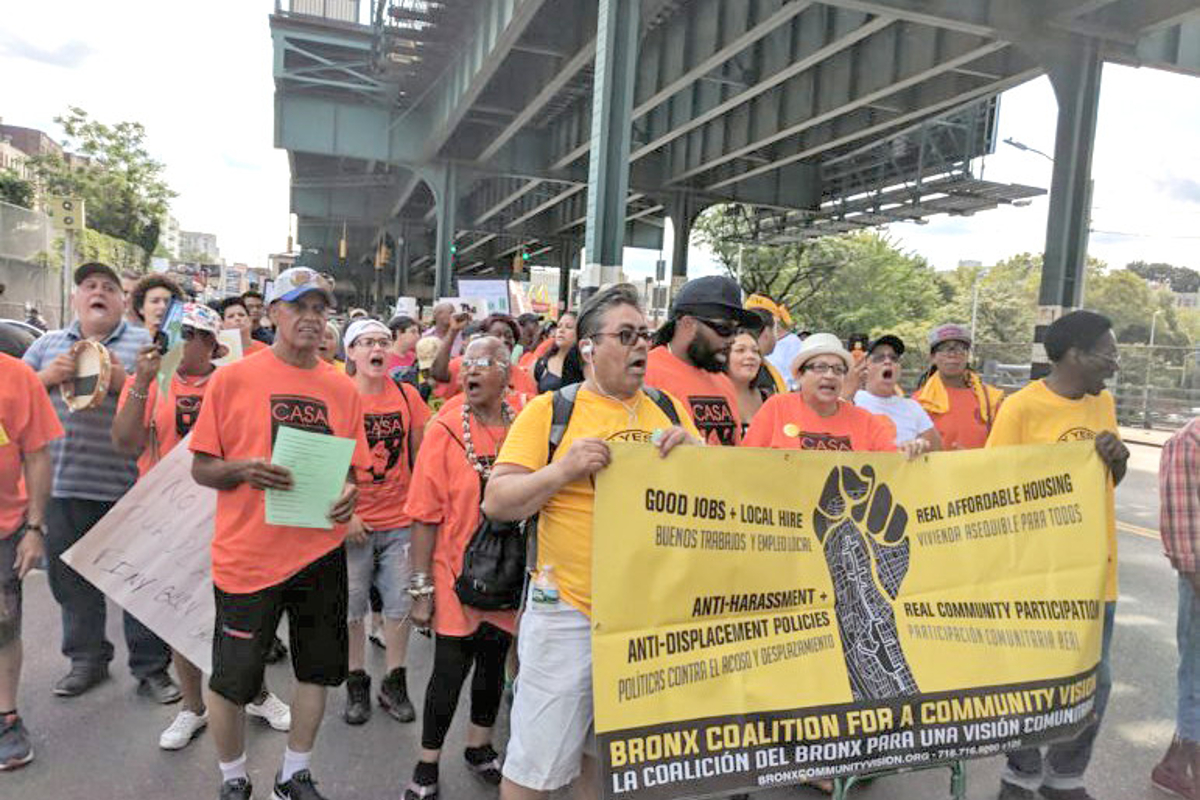 The city began a formal review of its plan to rezone two miles of Jerome Avenue in the Bronx on Monday, after the City Planning Commission (CPC) certified the proposal during a review session.

This marks the beginning of the Uniform Land Use Review Procedure (ULURP) for zoning that would allow the development of hundreds of new apartments.

Following the announcement that public review had begun, hundreds of residents and community organizations marched in protest against the plan in a park along Jerome Avenue.

According to a report from News 12 The Bronx, marchers said they were “frustrated” with the city’s plan and believed their requests for “career track jobs, deeper affordable housing and anti-displacement policies” have been ignored. Carmen Vega-Rivera of Community Action for Safe Apartments (CASA) said in a press release that the city has ignored the community’s plans.

“We the community have been meeting and planning for over two years to come up with a platform that meets the needs of the community,” said Vega-Rivera. “The fact that the city is moving forward with their plan and not our plan speaks volumes about the City’s priorities. The City still has time to stop this plan.”

The Bronx Coalition for a Community, an organization formed after the City first announced plans to rezone Jerome Avenue, said in a press release that they are asking the City to consider the effects that potential federal budget cuts might have on New York City’s affordable housing programs and urged the City to hold off on any rezoning until the new federal budget has passed and “firm financial commitments can be made.”

The Coalition argued that the City is already building affordable housing around Jerome Avenue at a fast enough pace to reach its goal without a neighborhood rezoning, and asked for more explanation as to why a major increase in density and market-rate housing is needed at all.

The new zoning would cover 73 blocks along Jerome Avenue, from McClellan Street in Highbridge and running North up to 184th Street in University Heights. Jerome Avenue also passes through the neighborhoods of Mount Eden, Mount Hope, Morris Heights, and Concourse as it continues North.

Currently, the area proposed for rezoning only allows for new development that is commercial, which includes retail, office space or industrial buildings like auto body shops and warehouses. Through the zoning, the City is encouraging new construction of large, mixed-use residential buildings that will bring new retail, community services and thousands of affordable apartments units.

According to the DCP, the rezoning could create an influx of 3,250 new apartments into the area, as well as 72,273 s/fof community facility space, and 35,575 s/f of commercial/retail space.

Marco Lala, a commercial broker at Marcus & Millichap who works in the Bronx, said because the area is well-served by mass transit, the rezoning will drive competition with neighboring stock.

“I think with the trains there, it’s a no brainer, said Lala. “I think you’ll see a spurt of activity.”

Lala recalled the year that the City rezoned Hudson Yards, and brokers were “scrambling” to work in the area, anticipating that long term owners would seek to cash in.

“That part might be short lived, and while some owners may stick it out, it will level off again,” he said.