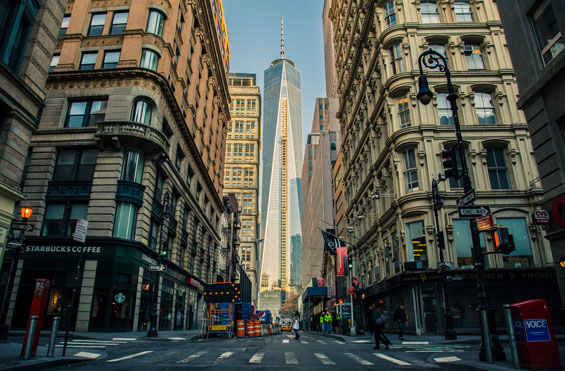 Lower Manhattan is the strongest commercial leasing market in NYC, according to a new report. The neighborhood experienced its highest year-to-date leasing activity since 2014, led by major lease deals by Macmillan Publishers, ESPN Studios, and the Stagwell Group.

A new 3Q report from the Alliance for Downtown New York found that vacancy rates for the area’s commercial space has dropped to 8.7 percent – the third consecutive quarter the number decreased, and the lowest it’s been since 2014.

Since last quarter, leasing activity shot up 20 percent in Lower Manhattan, with the area logging 1.43 million s/f of new activity in the third quarter. That number brings the total leasing volume to 4.5 million s/f so far this year. According to numbers from CBRE, that total has already surpassed total leasing numbers for 2016.

Lower Manhattan has benefited in particular from companies relocating their offices to the area from other submarkets. This year so far has seen big tenants like Spotify and Macmillan Publishers relocating downtown, along with several other smaller tenants. According to the report, there has been a net in-migration of 13.3 million s/f of tenants since 2011.

Leading the leasing charge in the third quarter and year-to-date are TAMI and government tenants, which have accounted for nearly 60 percent of all new leasing activity in 2017, according to the report.

The top lease in the third quarter was the New York City Department of Investigation, which took 276,211 s/f at 180 Maiden Lane, in an expansion and move within Lower Manhattan. Among the top ten lease deals were Macmillan Publishers move from Flatiron, law firm Lewis Brisbois Bisgaard & Smith’s expansion and renewal at 77 Water Street, and WeWork’s 85,000 s/f deal at 115 Broadway.

While experiencing the most robust leasing in the third quarter, Lower Manhattan can also claim the least expensive average asking rents for commercial space. Average Class A office space rent is $63 per square foot, up 1.2 percent from year-over-year, while average Class B rent is $53.20, up 5.7 percent year-over-year.