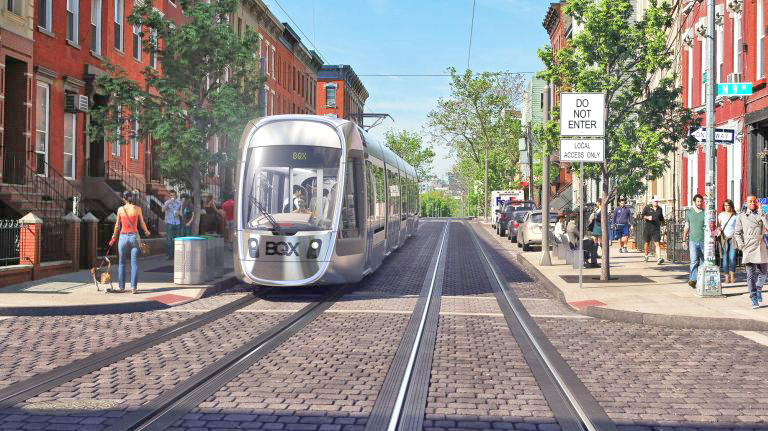 New analysis underscoring the need for a Brooklyn Queens Connector, BQX, says that neighborhoods like Long Island City, Astoria and Gowanus are on the precipice of a commercial space boom set to overtake other major U.S. office markets, a trend that predates the buzz of Amazon’s new proposed headquarters.

According to the report, which uses research conducted by BJH Advisors, the corridor along the proposed BQX — a new line of public transit set to run from Astoria, Queens to Red Hook in Brooklyn — is already poised to eclipse other commercial office markets like those in downtown Los Angeles, Philadelphia, and Boston by 2029.

Though the analysis comes shortly after the announcement that Amazon will build a sprawling new Long Island City campus set to span six million s/f and add an estimated 25,000 new jobs, other developments throughout Queens and Brooklyn have already signaled a shift along the corridor.

Among those new frontiers are the Brooklyn Navy Yard, which will house 30,000 workers by 2035 and several others in Downtown Brooklyn including Willoughby Square, a 495 ft. office tower.

According to the report, in downtown Brooklyn alone, there is currently three million s/f of office space under development.

Additionally, throughout the corridor, the report projects that from Astoria to Red Hook, commercial office inventory will balloon by 50 percent to 20 million s/f throughout the next decade and could be home to an additional 70,000 more jobs.

And while Amazon’s new headquarters may not be the impetus for the explosion of commercial space along the corridor, experts agree it will likely be a catalyst in what the report describes as “spillover effects.”

According to BJH, those effects will include not only the direct jobs, but the indirect ones which an analysis estimates to total upwards of 36,000 across New York City. In the corridor alone, the analysis projects 4,300 new workers locating there.

Both Amazon’s plans and the ongoing growth in commercial space underscore the need for additional transit lines — in particular the BQX — states the report.

“With 58 million square feet of commercial space expected along that corridor within a decade, the need for quality mass transit to connect those fast-emerging employment hubs, deliver workers to jobs, and continue to fuel the area’s economic growth in the coming decades is urgent,” states the report.

Preliminary plans for the BQX would link Astoria, Queens to Red Hook, Brooklyn via an emission-free streetcar system that advocates say would be resilient to floods and accessible for those who are disabled.
Current proposals would see the streetcars run every five minutes and would cost the equivalent of a current bus or subway ride.

However, even with increased demand, funding for the BQX has been difficult to shore up with an estimated $2.7 billion price tag.

Announced in 2016, Mayor Bill De Blasio, a Democrat, said that the construction of the BQX would pay for itself through “value capture” – a process wherein the city sells bonds to pay for construction and later pays off those bonds using revenue from increase property taxes created via the new railway.

Critics of that plan have been quick to point out that, in order to generate enough property tax revenue, housing prices – many of which are already reaching their upper limit – would have to rise dramatically.
Currently, according to brokerage and research firm MNS, median rent prices in Long Island City for a one-bedroom are $3,200, rivaling neighborhoods like SoHo in Manhattan.

Alternatively, partial funding could come through payments from Amazon, which will make Payments in Lieu of Taxes, or PILOT payments, to the city that can be used towards infrastructure work.

Stil, these payments may get the BQX’s funding only part of the way towards fruition.

According to Gothamist, City Hall reported that it expects Amazon to make $650 million PILOT payments over the next 40 years.