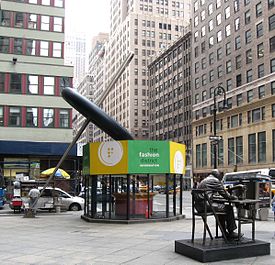 The City Council has voted to change the fabric of the Garment District with a major rezoning plan.

The council approved a rezoning that it said will better align the Garment District’s zoning with its current uses. The area was long known for its concentration of garment makers and clothing manufacturing facilities, but has since evolved into an area full on non-compliant office uses and new hotels.

The city has developed a comprehensive rezoning that will preserve fashion manufacturing but also provide room for the district to grow.

The rezoning will remove a 1:1 zoning mechanism where landlords had to preserve an equal amount of manufacturing space to the office space they were creating. The plan also creates a tax incentive program for property owners to earn up to $4 off their real estate taxes per s/f leased to fashion manufacturers. Those leases would be for at least 15 years with rents capped at $35 per s/f.

To guarantee some manufacturing space, the city will provide $20 million in funding to go towards a public-private purchase of a building designated solely for garment production. The rezoning also requires hotel developers to seek a special permit to build anywhere in the district, in order to curb the spread of hotels.

“[This] marks another major milestone in a multi-year process to ensure a permanent home for garment manufacturers in New York City,” said Corey Johnson, the council’s speaker. “The manufacturing sector is a key part of the broader New York fashion industry, which contributes so much to our city, so securing its health for today and in the years to come is absolutely vital.”

Going into the new year, the city will create an advisory group that will monitor the rezoning’s effects and provide updates throughout 2019 and is expected to include local and industry stakeholders.

John Banks, REBNY’s president, said the plan will “lift the stringent regulations that has limited investment in the Garment District’s building stock for more than 30 years.”

The Garment District Alliance, the area’s Business Improvement District which was involved in the rezoning planning, was also approved to raise their annual budget by $2.5 million.

“[This] historic vote will ensure that the Garment District remains a hub for American fashion while at the same time unleashing the neighborhood’s full economic potential,” Barbara Blair, the alliance’s president said. “This is a tremendous, pivotal moment for the future of our City, and I thank the Garment District property owners for playing a critical role in developing a plan that would preserve apparel manufacturing while positioning our neighborhood for continued growth.”