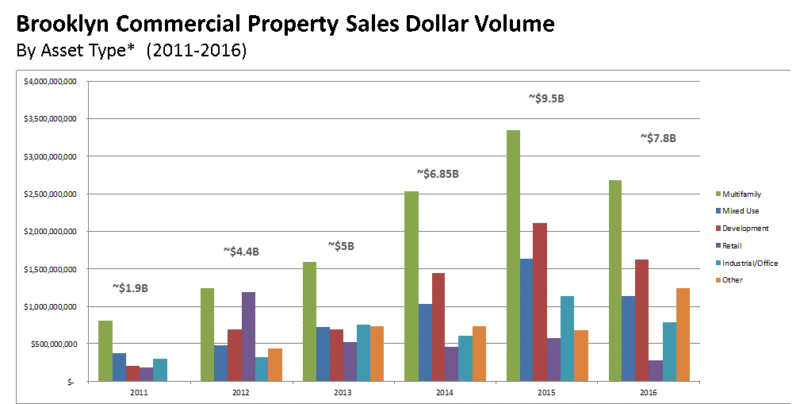 TerraCRG released their 2016 Year-End Brooklyn Market Report, examining trends emerging across all commercial sales in the Brooklyn market in 2016. TerraCRG’s seventh annual report verified a total of 1,504 commercial sales in 2016, with a total consideration of approximately $7.8B.

As expected, after a six-year run up in the Brooklyn market, sales volume began to level off this past year. Transactional volume saw a 20% decrease, however, the average price per SF of properties increased across all asset types. The largest price per SF increase was in the multifamily sector, which saw a 17% increase from 2015 to 2016 and represented the asset class with the highest dollar volume, totaling over $2.69B. Across all asset types, the average transaction size in Brooklyn is now $5M, up from $1.3M in 2010.

Without the completion of these transactions, the adjusted dollar volume would have been approximately $6.9B, slightly higher than the predicted $6.5B. As anticipated, transaction volume for residential development sites dipped mid-year, but showed signs of recovery in Q4 with a total consideration of $568M, aided by the Watchtower sales.

“In 2017, we expect the Brooklyn market to continue to stay strong. With no major portfolio trade such as the Watchtower, total dollar volume will either plateau or decline slightly. While inventory continues to be tight, prices of walk-up multifamily assets are expected to remain very strong,” said Ofer Cohen, Founder & CEO of TerraCRG.