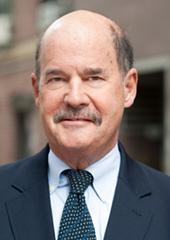 Regional Plan Association announced that President Robert D. Yaro will retire at the end of the year, after 25 years at the urban-planning organization.

The executive committee of RPA’s board of directors has unanimously recommended that RPA Executive Director Thomas K. Wright succeed Mr. Yaro as president. Following the transition, Mr. Yaro, 64, will serve as RPA president emeritus and senior advisor, consulting on a range of policy matters.

“I have been privileged over the last quarter century to guide RPA and help address some of the New York metropolitan region’s most pressing challenges,” said Mr. Yaro. “While I will miss working with the extraordinarily talented researchers and policy experts at RPA on a daily basis, I am thrilled to be leaving the organization in the hands of someone as accomplished and visionary as Tom Wright.”

“Bob Yaro has built an extraordinary record of accomplishment at RPA, transforming the organization into a civic powerhouse whose work shapes public policy in our region and in urban areas around the world,” said RPA Chairman Elliot Sander. “The vital work he has done at RPA has laid the groundwork for the Fourth Regional Plan and played a key role in the metropolitan region’s resurgence as a global leader.”

Bob Yaro has been part of RPA’s leadership for 25 years and its president since 2001. During Mr. Yaro’s tenure, RPA has been instrumental in proposing and advocating for some of the most significant improvements in transportation, economic development and environmental sustainability in the New York-New Jersey-Connecticut metropolitan region. Many of these projects had their roots in RPA’s Third Regional Plan, “A Region at Risk,” which Mr. Yaro shepherded in the 1990s.

The region’s biggest transportation initiatives since World War II, the 2nd Avenue Subway and the East Side Access project linking the LIRR to Grand Central Terminal, grew out of recommendations made by RPA.

Under Mr. Yaro, RPA also played a role in planning for the creation of the JFK AirTrain connecting the LIRR and subway to the airport. RPA has conducted in-depth research on the Northeast rail corridor, calling attention to the dangers of deferring maintenance.

And working with the organization’s civic partners, Mr. Yaro has led RPA’s continuing efforts to campaign for a new Penn Station, culminating in 2013 with a vote by the New York City Council that rejected Madison Square Garden’s bid for a permanent lease atop the transit hub.

Mr. Yaro led efforts at RPA to redevelop Manhattan’s Far West Side, laying out a vision to create the mixed-use district that became Hudson Yards.

Today, a thriving business, retail and residential community is under construction, and a new subway station is scheduled to open there later this year. RPA also worked closely with Newark, N.J., Stamford, Conn., and Bridgeport, Conn., on the creation of comprehensive redevelopment plans that have revitalized these cities’ downtowns and strengthened surrounding neighborhoods.

During Mr. Yaro’s tenure at RPA, the organization steered key initiatives that led to the preservation of environmentally sensitive land in Long Island, upstate New York and New Jersey, protecting the water supply for millions of residents in the region. RPA also led the transformation of Governors Island from an abandoned Coast Guard base into a popular urban park.

Under Mr. Yaro’s leadership, RPA has expanded its role both nationally and around the world. He established America 2050, RPA’s initiative to examine long-range infrastructure needs in the U.S. He pioneered the concept of megaregions in identifying the interdependence of large regional areas on infrastructure and natural resources. In 2012, he established the Global Lab, a joint venture with the World Bank to promote improved metropolitan planning in emerging global cities.

In 2013, Mr. Yaro initiated RPA’s Fourth Regional Plan, recognizing that while the metropolitan region has made great strides in the last two decades, major challenges threaten to derail its success.

“The New York City region and the nation are blessed to have Bob Yaro’s leadership at RPA,” said Polly Trottenberg, Commissioner, New York City Department of Transportation. “Bob has worked tirelessly to promote smart, sustainable infrastructure and economic growth in urban America with a rare mix of long-term vision and day-to-day pragmatism.”