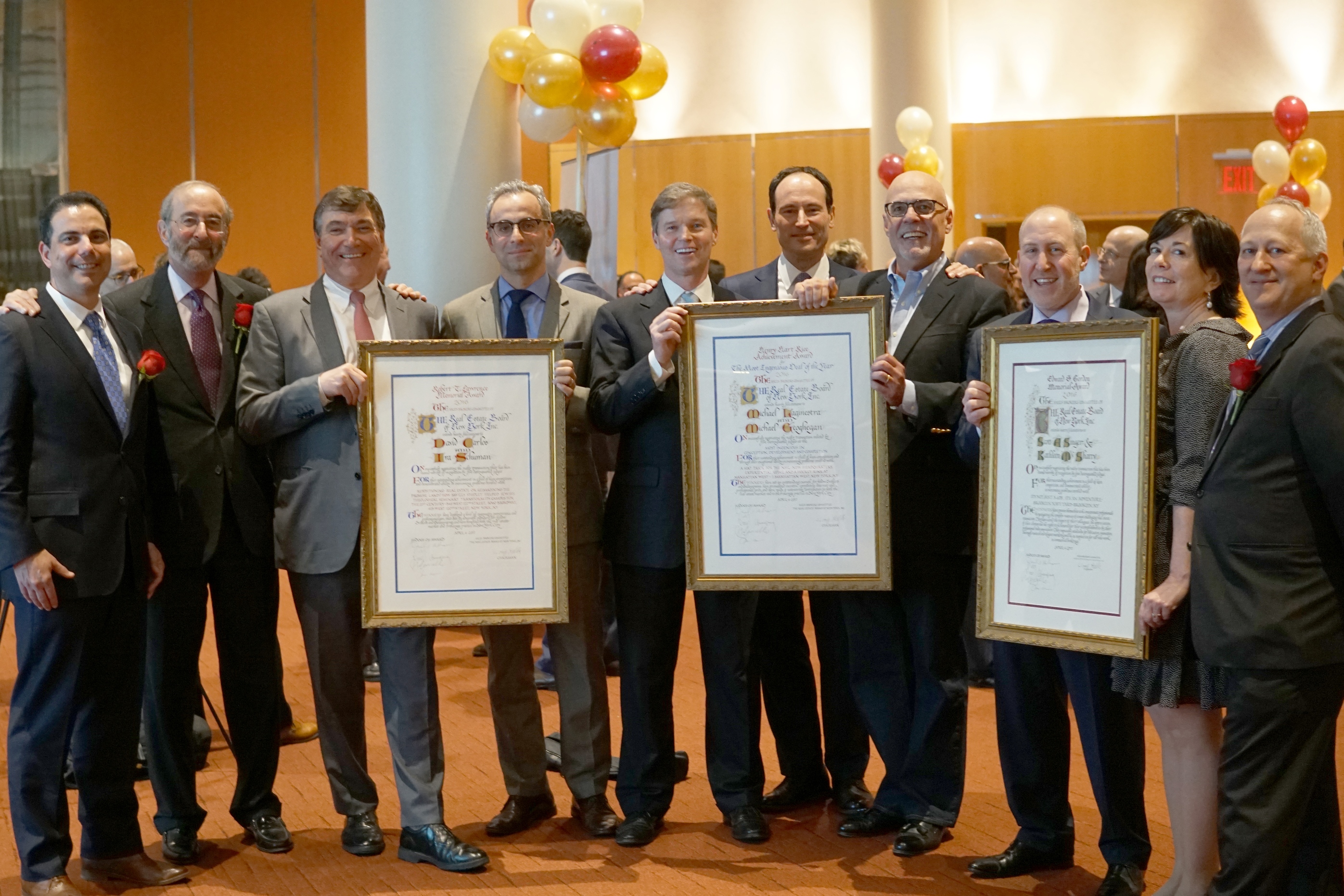 “The award winners delivered solutions that exceeded their clients’ expectations,” said REBNY President John Banks. “Their commitment to go above and beyond to achieve results that are economically beneficial to the City and its institutions, residents, and visitors demonstrates the high level of professionalism and expertise that sets REBNY members apart.”

The trifecta “Hat Trick” deal scored by CBRE’s Michael Laginestra and Michael Geoghegan for the National Hockey League (NHL) on Manhattan’s West Side claimed the 2016 Henry Hart Rice Achievement Award. As the league celebrates its 100th anniversary this year, the brokers’ game-changing negotiations last year, driven by the duo’s professionalism, ingenuity, and passion for sports, exceeded the NHL’s expectations that initiated with a much simpler request: to improve the day-to-day operations of their current headquarters.

Through creative deal-making, complex financial engineering, and multi-party negotiations, the duo arranged: a 160,000-square-foot, marquee-branded NHL headquarters relocation to Brookfield’s One Manhattan West with projected delivery in 2020; secured a new NHL-emblazoned public ice rink in the new development’s plaza; and set into motion a grand vision that will create a two-story, experiential NHL retail presence at the center of the ice rink with a private observatory deck overlooking the ice.

The 2016 Robert T. Lawrence Memorial Award was presented to David Carlos and Ira Schuman, of Savills Studley, who orchestrated the transformative repositioning of the Jewish Theological Seminary (JTS) campus in Manhattan’s Morningside Heights.

Through three years of analysis, negotiation, and large leaps of faith, Carlos and Schuman unlocked tremendous value in the nonprofit’s 300,000 square feet of unused development rights and other off-campus properties, raising $131 million to help JTS re-imagine its campus to meet its growth, financial, and modernization needs.

What started off as a capital campaign to renovate the institution’s library, evolved, by way of the brokers’ ingenuity and tenacity, into an ambitious portfolio-wide plan. The multi-tiered solution—comprised of multi-party sale and leaseback transactions with Esplanade Partners and Savanna, a never-before-achieved tax lot subdivision on land with an existing building, the actualization of existing open space to solve the site’s zoning puzzle, the expansion of the campus’s green space by over 50 percent, and the simultaneous closing of contracts with necessary provisions for 543 West 122nd Street, 3060 Broadway, and 415 West 120th Street—paved the way for the construction of a new 100,000-square-foot, on campus building consisting of a library, conference center, and dormitory, with millions left for the nonprofit’s endowment.

Scott A. Singer and Kathleen McSharry, of The Singer & Bassuk Organization LLC, took home the 2016Edward S. Gordon Memorial Award for refinancing the Brooklyn Navy Yard Development Corporation’s (BNYDC) $60 million of EB-5 debt that encumbered the economics of their leasehold interest with the City of New York for the 300-acre Brooklyn Navy Yard.

With a goal of reenergizing the industrial park—which sits on one tax lot and is home to over 330 businesses and 7,000 employees—the team faced a unique set of challenges throughout the 16-month odyssey, coordinating with numerous stakeholders to arrange the Navy Yard’s first conventional real estate mortgage loans and rework its ground leases dating back to the Mayor Ed Koch administration.

The ingenious solution executed by Singer and McSharry created a sandwich/sub-leasehold financing structure that BNYDC will utilize for decades to come and resulted in the simultaneous closing of two loans with Symetra Life and Sterling Bank that utilized net-leased assets as collateral: a 280-megawatt power plant, large dry docks, an operational shipyard founded during the John Adams Administration, the City’s oldest distillery, the Duggal Greenhouse where the Bernie Sanders versus Hillary Clinton Democratic Primary Debate was held, and several other traditional and non-traditional assets.

Click here to read about the other sale, lease, and finance transactions submitted for the 2016 competition.