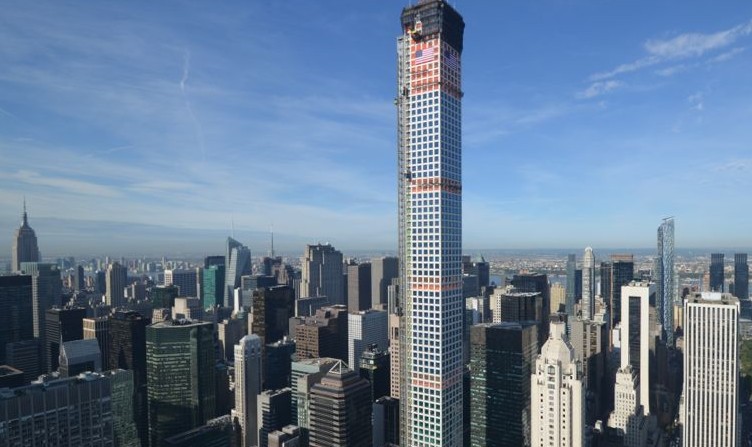 The Real Estate Board of New York has dismissed a new report slamming New York Cityʼs newest generation of skyscrapers.

“The latest generation of tall, slender and mostly residential towers positively contributes to our city architecturally, economically and environmentally,ˮ said John Banks, president of the Board.

“These new additions to our skyline signal across the globe a city ascendant. They symbolize an urban environment that is vibrant and exciting. We are confident that over time, the latest generation of towers — like their predecessors — will become beloved members of our skyline.ˮ

The comments came following the release of a Municipal Arts Society of New York (MAS) report calling for revisions to the city’s building codes earlier this week.

“Developers are only playing by the rules provided to them by the City government, which in some cases are more than 50-years-old and woefully outmatched by the realities of city-building today,” said Mary Rowe, executive vice president of MAS

The group feels strongly that development of high-rise structures in Manhattan needs to be under stricter guidelines.

After releasing a study in 2013 that pointed to a need for more thorough regulation of “this new frontier of development,” MAS is now calling for a temporary moratorium on towers over 600 feet that haven’t gone through public review. “The de Blasio administration continues to be deaf to the concerns of New Yorkers who want and deserve a thoughtfully planned and beautifully designed cityscape and skyline,” continued Rowe. “We must do better.”

While MAS expressed concern for eight Manhattan neighborhoods where supertalls are currently permissible via zoning and available air rights, the group focused on Central Park, which abuts multiple sky scrapers.

The Real Estate Board of New York (REBNY) disagrees with MAS’s sentiments.

“MAS’ now oft-repeated claims don’t make them true,” a representative for REBNY told Real Estate Weekly. “Like its prior criticisms directed against the latest generation of towers, its claims ignore the history of development and zoning in New York, overlook the zoning rules that applied to the building of towers, dismiss the economic benefits from these projects, and in many instances are misleading.”

Rowe countered that argument, saying that the “jury is still out” on whether the financial benefits of such structures outweigh the repercussions of building them. “You never want to live in a city were economic arguments trump everything,” Rowe said.

Rowe stressed that MAS is not inherently against supertall buildings but rather is opposed to what they perceive to be a lack of public involvement in deciding when and where that they can be built.

“We think that New York has always been a place for spectacular buildings and new technologies. What we are concerned is the cumulative impact,” she said.

“Technology has changed and the availability of the investment capital means that these buildings can go up in a number of parks and cities without any type of review at all.  They disrupt the skyline considerably and they are going up without any public review,” Rowe added.

Councilman and chair of the Parks Committee, Mark Levine concurs with MAS’s argument.

Earlier this year, Levine spoke with Real Estate Weekly about how towers such as Extell’s One57 and CIM’s 432 Park cast large, unwanted shadows across Central Park.

“From the moment I was designated chair of the Parks Committee, advocates started to raise this issue with me,” Levine said. “Over the past year, with the rise of the towers just south of Central Park, the alarm has only grown stronger.”

“The biggest problem is spring and autumn,” Levine continued. “The sun is low in the sky and the temperatures are such that people are drawn to the sun. If you go through a park this time of year in April, you’ll see people sitting on the sunny benches and very few people sitting in the shade.”

Levine worried that Park attendance would drop if too much of the park became shrouded in cloud cover.

MAS‘s recent release included “corrected” supertall advertisements from the last year. These revised ads depicted the surrounding towers that the original ads left out. It also included an update to MAS’s December 2013 Central Park renderings which illustrate the number of new towers that have been built or announced over the past two years.