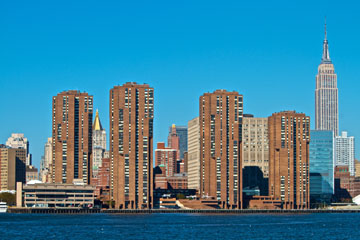 The owner of Waterside Plaza, Richard Ravitch, has entered into a tentative deal with the city to help preserve affordability at the complex in 325 apartments occupied by “settling tenants” in the 1,470-unit development.

Those tenants had entered into an agreement with the owner after the property left the affordable Mitchell-Lama program at the turn of the millennium to pay a fixed increase each year, which is currently 4.25 percent. In those apartments, about 30 percent of Waterside’s housing stock, the majority of their occupants are seniors.

Under the agreement, which still must go through a ULURP process and get the approval of Community Board 6, the borough president and the City Council, tenants in those 325 apartments will all see some sort of rent relief.

Tenants earning under 165 percent of the AMI who are not rent-burdened will get rent freezes. Tenants earning over 165 percent of the AMI will see their annual rent increases reduced to either 2.25 percent or whatever the Rent Guidelines Board votes as an increase for the city’s rent-stabilized tenants even though Waterside is not rent-stabilized. However, the increase will be capped at 4.25 percent.

In exchange for the loss of rental income to the owner, the city will decrease the 44-year-old property’s payments in lieu of taxes (PILOT payments) and extend its lease 99 years to 2069. This was part of a negotiation between Waterside and the city, since Waterside owns the buildings, but not the piles and platforms the residential complex was built on.

While nothing is yet a done deal, the agreement has the support of the Waterside Tenants Association, which unanimously voted in favor of it at a meeting on Monday evening as well as local elected officials, the landlord and the Department of Housing Preservation and Development (HPD), which worked with the owner.

“I am delighted that we have been able to work with HPD to provide continued affordability at Waterside,” said Ravitch, who also thanked local elected officials, in particular Council Member Keith Powers, for their participation in the negotiations.

Powers, meanwhile, said he intends to make sure the next steps don’t take longer than they need to. “We hope to get it done by February,” he said, while calling the agreement groundbreaking for the length of the affordability program.

“Most of these programs are 20 years. Seventy-five is way further than most people see,” said Powers. “Another thing is you can make up to $120,000 and still get a rent freeze.”

Additionally, he said, if a tenant in one of these apartments moves or dies, the apartment or one like it will remain affordable for 75 years, until 2098. The apartment would then be accessible through a lottery system.

Janet Handal, president of the Waterside Tenants Association, said she first brought up the idea about helping seniors age in place two years ago and said talks began in earnest last January. She said since then Ravitch, New York’s former lieutenant governor, has been very helpful in pushing things along with the HPD.

“Dick has a real affection for Waterside,” she said. “So I’m grateful to Dick and Peter (Davis, Waterside’s general manager).”

She added, “It’s a very unique community. People here cherish their homes and they cherish the community. You can go out on the plaza and talk to people. It’s like a small town.”

Along with the 325 settling apartments, there are 90 additional settling apartments that won’t be affected by the deal, Handal said, since they already have affordability protections through a “sticky voucher” program with the U.S. Department of Housing and Urban Development (HUD).

Market rate apartments currently listed on Waterside’s website include studios that start at over $3,000 and two-bedroom apartments at around $5,500.

The public can hear more about the plan at a Community Board 6 meeting that’s scheduled to take place on August 27 at 6:30 p.m. at the NYU School of Dentistry, 433 First Avenue, Room 220.