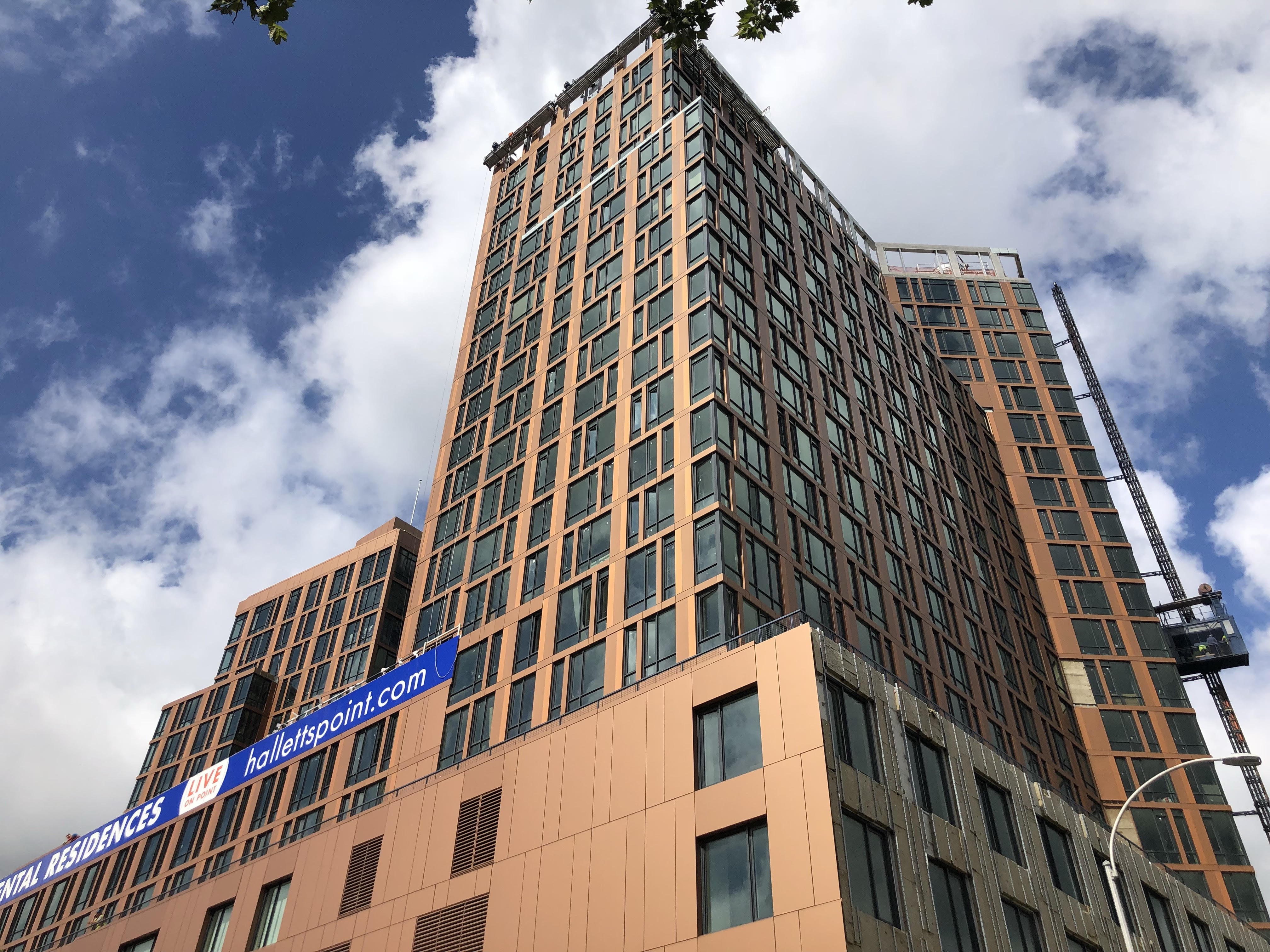 As far as outer-borough enclaves go, Astoria is anything but typical.

Other neighborhoods along the once-blighted Brooklyn-Queens industrial belt have leveraged waterfront development into widespread real estate prosperity, but Astoria has thrived without it, at least until now.

A popular ferry service, several big construction projects and the prospect of the BQX light rail have some in the real estate industry hoping that Astoria’s western frontier is ready for a gold rush.

“It’s still very heavy, with lots of mechanical shops and some streets have an industrial feel,” Corcoran agent Aleksey Gavrilov said of the area west of 21st Street, “but it seems like a lot of big developers are starting to put their money into this area and creating that residential environment that you see elsewhere.”

Drawn in by eclectic eateries, cultural attractions, cheap rents and access to Manhattan, young professionals have for years flooded the district’s core — bound by Steinway and 31st Street on the east and west, and Ditmars Boulevard and Broadway to the north and south — and investment dollars have followed in the form of new mid- and low-rise apartments, national retailers and posh boutiques.

Those signs of gentrification are scarce east of the elevated N-W subway line on 31st Street, with 21st Street serving as the cut-off line a quarter-mile from the water. Dotted with garages and trade shops, the corridor is a far cry from Kent Street in Williamsburg, or Franklin in Greenpoint.

However, that appears to be changing with several large residential projects in the works or recently completed on 21st Street and points west.

“That area, relative to the rest of Astoria, has been underdeveloped and it’s starting to see a lot of these large projects come online,” Victor Sozio, an agent with Ariel Property Advisors, said. “It will be a while before those projects are completed and stabilized but it’s starting to happen and I think it’s great for the neighborhood.”

The Durst Organization is the first big-name developer to plant its flag on the Astoria coast with 10 Halletts Point, a 22-story, 404-unit rental building set to open on First Street this fall.

In total, Durst plans to assemble 2,400 apartments in seven buildings on the strip of land known as the Halletts Peninsula, which juts into the East River just south of Astoria Park. Jordan Barowitz, a spokesman for Durst, said the 2.4 million s/f project could be a catalyst for change on the neighborhood’s quiet western front.

“It’s a vibrant and diverse community with a lot happening, however, the waterfront is underutilized,” Barowitz said.

“There are a lot of waterfront communities that at one point looked really unappealing and isolated, places that no one would ever want to live,” he added. “But, with a little sweat equity, they become very desirable.”

A handful of other large developments near Halletts have been floated and since fizzled. One noteworthy on-again-off-again project is Astoria Cove, a 1,700-unit complex on 26th Avenue backed by Alma Realty.

Met with community pushback and apparent financial hurdles, Alma put the site up for sale at a price of $350 million in 2017. It has since been pulled off the market. Alma did not respond to a request for comment about the future of the project. Alma, through its subsidiary Davidson Equities, also is putting the finishing touches on a 13-story, twin-tower high rise farther south along the waterfront, at 34-46 Vernon Boulevard. Featuring 404 units, the condo building overlooks the channel between Roosevelt Island to the west and Rainey Park, one of several green spaces that dominate the Astoria waterfront, to the north.

Elsewhere along Vernon, home to attractions such as the Socrates Sculpture Park and the Noguchi Museum, a handful of high-profile developments have taken shape during the past decade, including the Sohmer & Co. Piano factory, which was converted to condominiums in 2008. The 20-story East River Tower on nearby 31st Avenue, the tallest residential building in the area to date, was erected around the same time.

In 2010, the city rezoned nearly 250 blocks of Astoria, an effort meant to limit large-scale development from running rampant in the neighborhood’s core, now capped at seven stories. The rezoning was also supposed to pave the way for larger projects closer to the East River, but that has yet to materialize.

David Baruch, an analyst at Ariel Property Advisors, said that appears to be changing with nearly all of the ongoing and recently completed residential construction — accounting for nearly 2.4 million s/f and close to 3,000 units in total — taking place west of 31st Street.

However, close to 90 percent of those apartments are rentals, Baruch said, which is unusual for a fast-growing residential market. “Right now, we see a lot of activity in northwest Astoria, from 31st Street to the waterfront,” he said. “Usually when you see a big boom in new construction, it comes with skyscrapers and condos, but we really haven’t seen much of that in Astoria, yet. To me, that just screams opportunity, so I expect that to change.”

Andrew Barrocas, CEO of MNS Real Estate, said that despite the limited supply, the demand for condos remains strong in Astoria, where buyers can find cheaper alternatives to nearby Long Island City without sacrificing much in terms of lifestyle or commuting time to Manhattan.

Recent reports show the average one-bedroom in LIC selling for upwards of $1,100 psf compared to prices in the $800s range for Astoria.

Barrocas said the growing interest in Astoria has been driven by the rapid expansion of Long Island City. However, unlike other subsidiary markets that have benefited from gentrification in a nearby neighborhood, Astoria was a ready-made alternative with its assortment of Greek and Italian restaurants and thriving nightlife.

“We were starting with an established neighborhood,” he said. “When we started in Williamsburg it wasn’t established at all we were building these big luxury buildings by the waterfront and elsewhere then moving into the rest of the neighborhood. In Astoria you’re having the inverse, it already had the schools and restaurants.” Ross Moskowitz, a zoning expert at the Stroock law firm, is skeptical that the neighborhood will ever experience development to the scale of Long Island City or Williamsburg.

“The zoning there is not necessarily set up for the type of large-scale development you see elsewhere on the waterfront throughout New York City,” Moskowitz said. “Whereas in Long Island City, the city had this master plan that allowed for the construction of a series of towers for an alternative office market to Manhattan, I don’t see Astoria as being an alternative location to the office market.”

Sozio, of Ariel Properties, agrees that Astoria will probably maintain a different aesthetic than other waterfront districts, such as Dumbo. Also, with between four- and five million s/f of new residential projects in the pipeline throughout the neighborhood, he said there needs to be an increased focus on retail development, which stands at just 135,000 s/f in the pipeline.

Durst is attempting to address this at Halletts Point by including a new grocery store. Sozio said it will take more than that to keep up with demand. “Right now, if you look at just the starts, the amount of retail that’s planned relative to the residential development is minuscule,” he said. “But retailers tend to lag behind, so I do think that will change.”

Although there’s work to be done to catch up with other waterfront districts, Modern Spaces broker and lifelong Astoria resident Gregory Kyroglou, is confident in the trajectory of his neighborhood.

“I still think Astoria is underrated,” said Kyroglou, who runs Modern Spaces’ Astoria office, “I don’t think people realize the potential Astoria has. We’re not even near the peak of what can happen and what will happen here.”

HAVE YOU HEARD? Citi Habitats agent lands spot on ‘The Proposal’