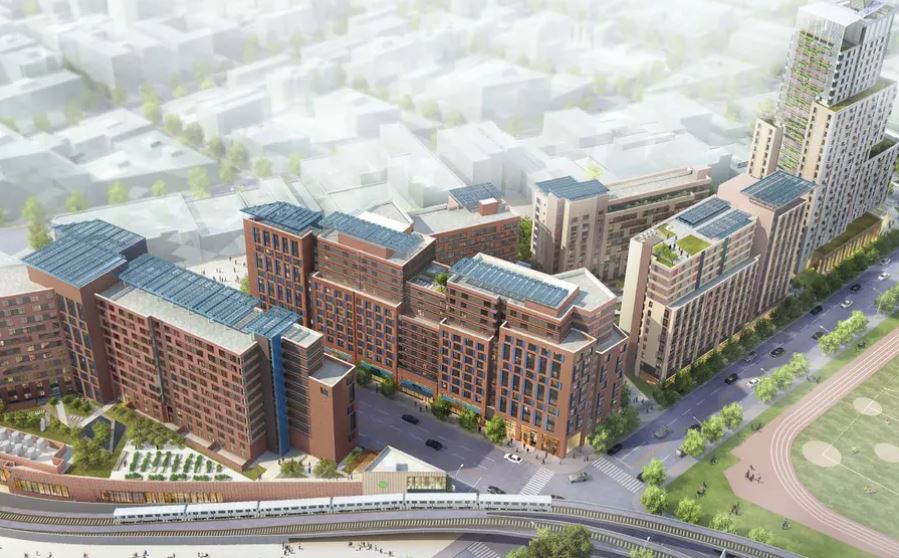 Leases have been signed for an organic food market and parking garage at the giant La Central apartment community in the Bronx.

KZA Realty Group and RM Friedland Realty announced they brokered the deals at the first two buildings to open in the development that will ultimately include five apartment buildings with 992 units when it is complete in 2023.

“This is a great opportunity to make La Central more accessible to the people of the Bronx. We are excited to be a part of the Bronx’s revitalization by supporting the leases of meaningful businesses,” said Kathy Zamechansky, president of KZA Realty Group.

Zamenchansky worked with Stephen Kaufman and Mia Abdou of RM Friedland Realty Services to negotiate a 10-year lease for a 32,000 s/f parking garage located in the lower level of Building B in the mixed-use development. The facility will provide 132 parking spaces.

Organic Market Corp. has lease 2,650 s/f of retail space in Building A. It will offer tenants access to fresh organic produce, meats and groceries from the ground floor space.

Developed by a joint venture that includes Hudson Cos., BRP Companies, ELH-TKC LLC, Breaking Ground and Comunilife, La Central began to rise in 2018. Once complete, it will include five apartment buildings spanning over 1.1 million s/f, a green roof and garden area, state-of-the-art YMCA, and fully equipped television and post-production studio operated by BronxNet-T Studios.

An additional 18,800 s/f of retail space is available to rent in Building A and Building B of the property.

Construction is ongoing on Buildings C and E,  two 100 percent affordable, mixed-use towers which will include a community facility space, a skate park and a telescope on the rooftop of Building E to be remotely controlled by Bronx High School of Science.

Building D, will be a 25-story 255,000 s/f tower with 254 apartments, according to plans filed with the city’s Buildings Department.