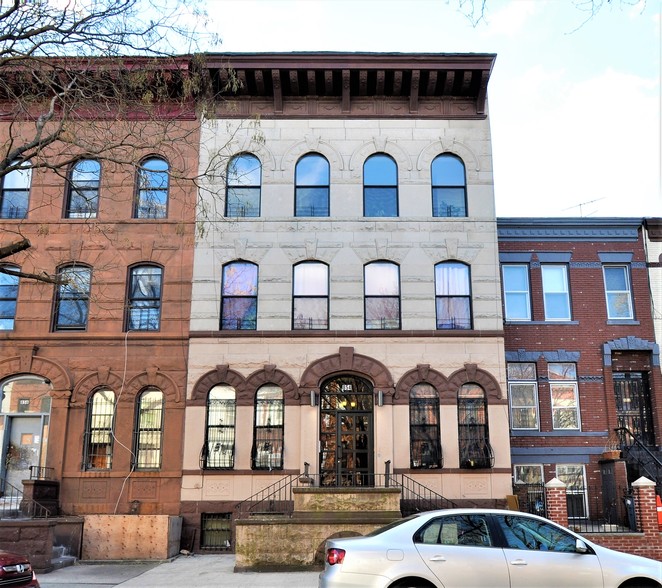 ON THE SCENE: Bestreich Realty Group announces the sale of 854 Hancock Street in Bed Stuy

New York-based RCS Real Estate Advisors has been retained by worldwide fashion retailer Forever 21 to help the company as they embark upon a transformation to restructure and restore their competitive position as a provider of fast fashion, announced RCS President and CEO Ivan L. Friedman. RCS will be assisting the company in creating and implementing an action plan to optimize their store fleet.

RCS was recently awarded with the Cross Border Deal of the Year at the 11th Annual International M&A for the sale of Vitamin World Inc. to Feihe International. This is the fourth consecutive year that RCS has received a distinguished industry award.

Seagis Property Group, an owner of industrial real estate, has appointed CBRE as the exclusive leasing agent for a 415,533 s/f industrial property currently under construction at 50 Central Avenue in Kearny, New Jersey. Currently, precast walls are being erected and the property is scheduled for completion in the first quarter of 2020.

The CBRE team of Thomas Monahan, Stephen D’Amato, Larry Schiffenhaus, Anastasia Lazarides, Lauren Griffith and Gerard Monahan will spearhead the leasing and marketing campaign on behalf of the developer.

The site is located 2.2 miles from Exit 15E of the New Jersey Turnpike and just minutes to Ports Newark/Elizabeth and Newark Liberty International Airport.

Bestreich Realty Group (BRG) has announced the sale of 854 Hancock Street located in the Bedford Stuyvesant section of Brooklyn. The 4-unit multifamily property sold for $1,950,000.  The property features 2 four-bedroom/two-bathroom units, 1 duplex three-bedroom/two bathroom unit and 1 two-bedroom/one bathroom unit of which 3 were delivered vacant. The property is built 27.83 ft. x 85 ft. with air/light shafts and offers approximately 6,470 s/f. It sits on a 27.83 ft x 100 ft lot and is zoned R6B.

Brian Davila, Steve Reynolds, Derek Bestreich, and Tom Reynolds facilitated both sides of the transactions as the seller was 854 Hancock LLC and the buyers were Albert Dweck from Duke Properties and Mark Guindi and David Zemmol from GD Capital.

Cushman & Wakefield announced that the firm has arranged for the sale of 68-19 Woodhaven Boulevard, a 15,400 s/f development property in the Woodhaven neighborhood of Queens. The final closing price was $5,350,000, equating to approximately $241 per buildable s/f and $347 per s/f.

Cushman & Wakefield’s Stephen Preuss and Rani Bendary represented the seller, The McCloskey Family, in this transaction. The building was purchased by Giuseppe Zuccarella.

The property sits at the northeastern corner of 68th Road and Woodhaven Boulevard, just one block north of the Yellowstone-Woodhaven intersection. The property is within walking distance to the Forest Hills Long Island Rail Road station as well as the Forest Hills – 71 Avenue subway station.

Matthew R. Peters, an investment specialist in Marcus & Millichap’s Brooklyn office, had the exclusive listing to market the property on behalf of the seller, a private investor. The buyer, a developer, was also secured and represented by Peters.

1811 Springfield Avenue is a two-story medical office building boasting ideal highway accessibility. Located just minutes from Interstate 78 and the Garden State Parkway, as well as Routes 22 and 24, the building’s proximity to regional transportation arteries and ample parking make it an ideal space for a medical office user.

A rapidly growing optometry practice, See Clear Associates features two locations in Morristown and Summit. Following their acquisition of the building, See Clear is planning a complete renovation of the space. Upon completion of the renovation, the company will occupy the entire first floor and continue to lease the second floor to medical tenants.

Kevin Darouvar, Yoel Sarraf, and Ryan Sabet of Venture Capital Properties exclusively represented both parties in the $2,100,000 sale. The property, located between 103rd and 104th street consists of 2,920 s/f.

The seller is Helen Altheim Stevens Management Trust. The buyer is Moy Wang, who plans to hold long term and renovate the building to be occupied by a restaurant.