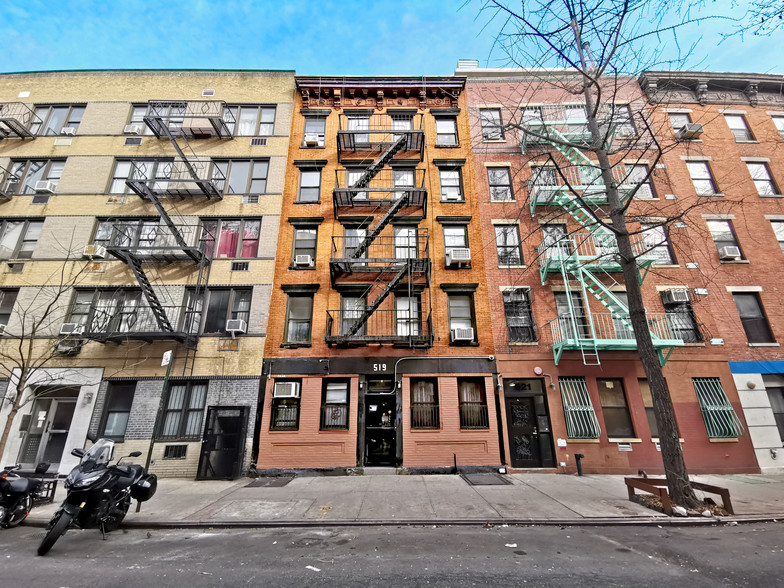 Mitti Liebersohn, Avison Young Principal and President of the firm’s New York City office, announced the firm is marketing an opportunity to sublease a 9,670 s/fduplex office suite at 40-42 Thompson Street in SoHo. Jamie Covello, Executive Director and Albert Wu, Director, are representing the current tenant in its search to secure a sublessee for the firm’s space, which is leased through December 2024. The two-floor office suite on the second and third floors of the 29,000 s/f building is connected via spiral staircase and features 24-foot ceilings, arched windows, an interior balcony and a glass expanse overlooking Broome and Watts Streets. The current, recently constructed installation contains bullpen space for up to 50 employees, soft-seating breakout areas, as well as three meeting/conference rooms and utility rooms. In addition, the building lobby was recently renovated and the new sublease carries window signage rights. The property is also in close proximity to multiple subway lines and SoHo’s eclectic mix of boutiques, restaurants and art galleries. The building, once a Con Edison substation, was converted in the 1980s into the home of the Manhattan Brewing Company, and its upper levels were converted to office use following the brewery’s closure in the 1990s.

RM Friedland announced that Marco Lala is marketing a development site at 2123 Jerome Avenue in the Bronx. The site presents an opportunity to develop a mixed use building in the University Heights neighborhood. There is currently a lease in place at $4,720 per month with a cancellation clause. The property is located on the West side of Jerome Avenue just south of East 181st Street and is situated within an R7A/C2-4 zone with Mandatory Inclusionary Housing. A recent re-zoning initiative which covers a two mile stretch on Jerome Avenue and includes the subject property is aimed at providing 4,000 new affordable units to the area. There is a MTA #4 train station a short walk away at Burnside Avenue. Residents will enjoy a 35 minute commute to Grand Central Station in Midtown Manhattan as well as local shopping and growing employment opportunities. Asking price is $2,995,000.

• 519 East 6th Street in East Village sold for $5,250,000 equating to approximately $720 per square foot. Zachary Ziskin, Adam Lobel, Justin Zeitchik, and Ethan Frank facilitated both sides of the transaction. The sellers are Loraine Kinyk and Darlene Hart and the buyer is Lionel Nazarian from Nazarian Property Group. The property is built 25 by 56 ft, offering approximately 7,295 s/f. It featured 10 one-bedroom units, of which six units were delivered vacant. The multifamily property is located in the heart of the East Village and steps from Tomkins Square Park.

• 836 Union Street, a 4,000 s/f mixed-use property in Park Slope, Brooklyn, sold for $2,750,000 equating to approximately $688 per square foot. Derek Bestreich, Luke Sproviero, Adam Lobel, Gabriel Kates, and Toby Waring represented both the seller, Judy Ann Taylor and the buyer, Charles Piggot, in this transaction. 836 Union Street is built 20 by 48 ft. with a nine by eight foot extension on the first floor. It features two two-bedrooms box unions, two studio units and a commercial storefront occupied by a dentist.

• 201 Marion Street, s six-unit multifamily property in Bedford-Stuyvesant, Brooklyn, sold for $2,625,000 equating to approximately $636 per square foot. Derek Bestreich, Steve Reynolds, Tom Reynolds, and Brian Davila facilitated both sides of the transaction. The seller is Candor Capital and the buyer is Black Horse Capital. All six units are fully renovated and the property is built 25 by 55 ft. It features two three-bedroom one-bathroom units, three three-bedroom one and a half bathroom units, and one four-bedroom one and a half bath unit.

• Franklin Commons, a multi-tenant 14,713 s/f retail investment property located at 691-703 Broad Street in Shrewsbury, NJ, traded hands for approximately $2.3 million. The center is located a half-mile from The Grove, a popular mixed-use destination. CBRE’s Steven Winters assisted on the deal.

• 47 Raritan Avenue in Highland Park, New Jersey, an 11,000 s/f fully occupied office building with eight tenants, sold for approximately $1.8 million. In addition to the seller, Gambuzza and Mariani also acted on behalf of the buyer.

• Marion Plaza, located at 16-22 Marshall Hill Road in West Milford, New Jersey, is a seven-tenant 7,000 s/f strip center comprised of five local, “mom-and-pop” shops and two apartments, that sold for $1.4 million. The fully occupied center boasts an incredibly stable tenant mix. In addition to the seller, the team of Gambuzza and Mariani represented the buyer in the transaction.

• 11 Middletown-Lincroft Road in Lincroft, New Jersey is a 5,911 s/f single-tenant investment property that sold vacant for $650,210. Along with the seller, Gambuzza and Mariani also acted on behalf of the buyer. They were assisted in the sale by CBRE’s Wesley Moore.

• 37-55 61st Street a 6,200 s/f industrial property located in Woodside, Queens, New York, sold for $3,260,000 equating to approximately $525 psf. Stephen Preuss and Rani Bendary represented the seller, Herman Zhou, in this transaction. The building was purchased by Judy Troung. 37-55 61st Street is comprised of office space, as well as outdoor space in the rear. There is the ability to develop the property an additional 9,600 s/f, totaling out to 15,800 s/f. The property is located directly between Broadway and Roosevelt on the two-way trafficked 61st Street. The building is easily accessible by public transportation and has close access to the Brooklyn-Queens Expressway at 69th Street.

• 3175-3177 Steinway Street, a 2,000 s/f commercial property in Astoria, Queens, sold for $1,870,000, equating to approximately $935 psf. Stephen R. Preuss and Andreas Efthymiou represented the seller, the Horak Family Corp., in this transaction. The property was purchased by ABS Steinway Acquisition II LLC. The sale represents the highest per square foot transaction on Steinway Street in over two years. The retail building is currently operated by a women’s clothing retailer. The single-story property is located within a C4-2A zoning district, allowing for commercial or residential development, with a total of approximately 6,750 buildable square feet. The property is located in proximity to Broadway with access to the N and W trains. The building is within walking distance to the R subway line as well as both Steinway Street station and 46th Street Station.

• 217 Franklin Street, a 6,356 of development site in Brooklyn, sold for $2,100,000. Shaun Riney, Michael Salvatico, John Barney and Austin Roche, investment specialists in Marcus & Millichap’s Brooklyn office, represented the seller, a limited liability company. The buyer, a private investor, was also secured and represented by the team.

Ultimate Realty announced its purchase of two retail condominiums located at 141 East 55th Street in Midtown East. The purchase price was $3,025,000. David Gomez from Fountain Properties represented Ultimate in its purchase from Lupo Properties. Greg Gropper and Ben Tapper from Lee and Associates represented the seller. The two units comprise a total of 3,200 s/f and and offer 65 ft of frontage. They are currently occupied by Lychee House and Mingle hair salon.