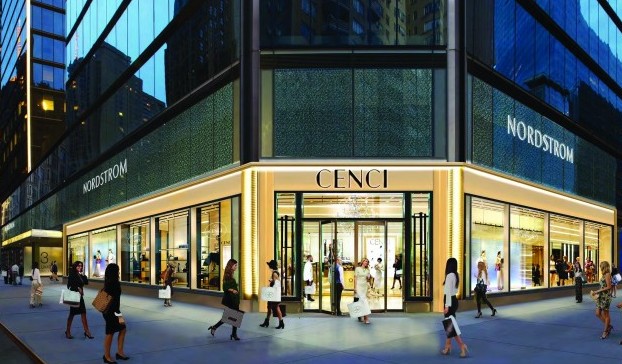 Nordstrom is expanding its presence at 3 Columbus Circle to occupy the entire Broadway retail frontage.

SL Green  and The Moinian Group announced this morning that Nordstrom is expanding its future Men’s store by another 3,973 /f, bringing its total leased space at the location to 46,991 s/f.

The Men’s store is part of the retailer’s New York City flagship footprint, and the expansion will allow Nordstrom to occupy the building’s Broadway retail frontage in full, including the corners of both 57th and 58th Street in addition to its flagship space at 225 West 57th Street.

Brett Herschenfeld, SL Green Managing Director, commented, “We are thrilled to continue our partnership with Nordstrom, a preeminent fashion retailer throughout North America. Nordstrom’s expansion reflects the prominence of 3 Columbus Circle’s location and demonstrates the continuing strong demand for high quality retail space in New York City. This transaction caps the complex retail leasing program at 3 Columbus in which several tenants were bought out or relocated and spaces combined to maximize selling area, providing significant incremental revenues for the company.”

The Nordstrom lease concludes a successful 2016 for SL Green Retail. Year to date, the company has executed 32 retail leases totaling 310,534 square feet, generating in excess of $70 million of rental revenue.

Herschenfeld said, “SL Green has assembled a premier portfolio of prime retail offerings in New York City with more locations to come. I am proud of our team’s results in 2016 and look forward to building upon the momentum and pipeline we have going into 2017.”

Honeybrains, world’s first cafe for the mind, opens in Noho