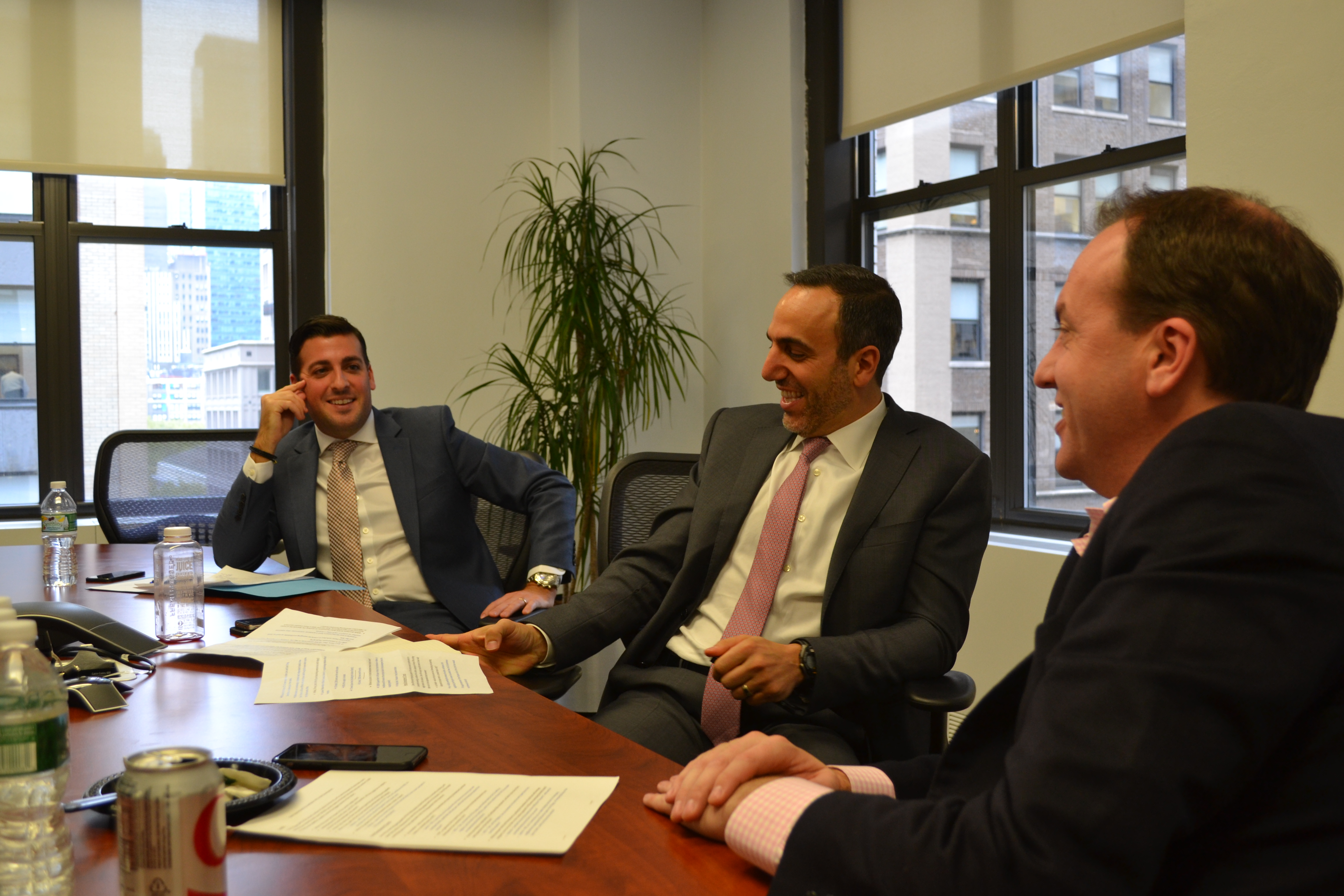 The North America Hotel Investment Conference (NATHIC) heard optimistic predictions from some of the industry’s most influential leaders at their annual summit last week, but New York City developers have their eye on a plethora of issues that could upset the applecart, from rising land prices to the Airbnb economy.
James Nelson and Andy Posil of Massey Knakal sat down with Will Obeid of Gemini Real Estate Advisors, LLC, Eddie Hidary of Hidrock Realty Inc., and Tyler Morse of MCR Development LLC, to discuss their current projects and the current hospitality environment in New York.

JAMES NELSON: Could you summarize your hotel portfolio and what you have in the pipeline?
TYLER MORSE: Nationwide, we have 92 hotels, including 40 Hilton hotels, 40 Marriott hotels, an independent hotel and a smattering of other hotel flags. In New York City, we have a boutique hotel in West Chelsea with 10,000 square feet of meeting space, and we are looking at two to three new build projects.
WILL OBEID: We have 11 hotels, nine in New York City, one in Boston, and one in Miami Beach. They range from small independent hotels to midsize independents, as well as more traditionally flagged hotels such as Crown Plaza, Holiday Inn Express and Wyndham. We have two lifestyle hotel concepts that we created, the Gem Hotel and the Jade Hotel. We have three Gems in New York and one Jade. We have three more Jade hotels in development, a ground-up project on 38th between Fifth and Sixth; a renovation of an existing hotel in the Seaport, and another partial demolition and renovation in Miami Beach.
EDDIE HIDARY: We have multiple hotels either operating or in the development phase in New York. We currently work with branded hotels, such as Marriott, Hilton, and Choice Hotels. We outsource management of each hotel, on a deal-by-deal basis.

ANDY POSIL: What do you see as the near-term impact of the current supply wave?
MORSE: I think it is going to keep RevPAR growth down for the next five to ten years in New York City.
OBEID: I think it is a short-to-medium term impact of maybe three years or so that we are going to have this anemic RevPAR growth of maybe 2 – 3 percent. But new supply will ease up, and then we will see more robust RevPAR growth again.
HIDARY: We all agree that there will not be significant growth. For 2015, we are underwriting very moderate growth. We feel that there is going to be a supply slowdown in the coming years due to current constructions prices and current land prices. We anticipate less supply, which will ultimately push growth in a few years.

POSIL: Is there a product type, be it either select service, or otherwise, that is becoming over supplied? Also, is there a particular part of the city that you feel is most subject to the supply coming online?
HIDARY: I would rather pin point areas that we feel are currently under supplied, such as Chelsea and further south towards the Financial District, where I still see a need to have new supply come on.
OBEID: I see the greatest opportunity to be in independent hotels, and I think Midtown, particularly Midtown East, is the best opportunity in the city right now. There are some 5,500 rooms with 35 hotels coming on line in just the Financial District over the next five years and 7,000 rooms with 32 hotels in Times Square. That makes those sub-markets pretty scary to me from a supply perspective.

NELSON: I have heard from several people that full service hotels are dead. What do you think about as you look to build new hotels?
MORSE: You have got to have a unique product to make a difference these days. The marketplace has been totally commoditized. Brands mean less in New York City now than they did before, and if you have something that is actually unique, that is a real point of differentiation and you can get a price premium for that. There are plenty of people to fill the rooms. It is just about the rate.

POSIL: What are the advantages of developing a boutique or an independent hotel versus a traditional branded hotel in New York and also versus secondary markets outside the City?
MORSE: A brand is more valuable outside of cities like Manhattan, Miami, San Francisco, and Chicago. When you are located in an office park in suburbia, the Marriott flag means a lot. When you come to New York, there are 100,000 rooms; everybody sees them all on the same search. Outside of New York City, there are real economies of scale, both in management and in the development process. In New York City, the knowledge you learn on your block regarding your landmark building and zoning lots is not transferrable to the next block over. Whereas our knowledge of owning a Courtyard in New Jersey is fungible to owning a Courtyard in Georgia, Texas, or Illinois.
OBEID: A more customized independent boutique product that reflects the context of a neighborhood, and a hotel owner and operator’s values is more interesting to me, and I believe a more valuable guest experience. Lifestyle hotels can be highly accretive to the overall fabric of the neighborhood where they are located, and I spend a lot of time thinking about how our current and future projects can positively participate as part of a neighborhood’s social system. New York and a few other major gateway markets work well for lifestyle hotels.
HIDARY: Our hotels are in heavily commercial areas frequented by business travelers. They like brand loyalty and the rewards points. They go there for business during the week so they can rack up their points and take their families on vacation when the time is right. That is one of our reasons for working with branded hotels. We also felt more comfortable knowing that if there is a dip in the market, owning a Marriott, Hilton and the like, is easier to sell or finance, than a boutique hotel.

POSIL: How do you incorporate your F&B (food and beverage) component into the hotel as a whole?
HIDARY: Most of our guests want to get out of the hotel and explore the City’s great cuisine, not necessarily sit in the hotel. In order to make our business plan work, and our margins as strong as they could be, we do limit F&B for our hotels.
OBEID: Some hotel owners and operators come from the club/restaurant world and started to add rooms up top. I started with the hotel experience and then added F&B, which makes us more room-centric than some of our competitors. My goal is to provide an authentic F&B experience within our hotel projects that will enhance the guest experience and the overall neighborhood.

MORSE: Of our $325 million in annual sales, less than $7 million dollars is F&B. We generally do not like the F&B business. The B business can work in certain instances, but the F business is a lousy business, and I think you are seeing the industry make a secular shift. Back in the 1970s and 1980s, every hotel had a full service restaurant that was not creative or innovative. You are seeing a lot more hotels lease out restaurants to experts and operators. The event space at The Highline Hotel is a 4,000 square foot ballroom with 65-foot ceilings, and the old Gothic architecture from 1899 makes it a special space. We host events there for fashion firms, creative houses, and advertising/marketing firms.

NELSON: What is your metric when you are buying a development site? What is the price that you want to pay all in, and where you are trying to end up per key, if that is the metric?
HIDARY: We look at IRR basis on a sale when it is complete, and we look to do well into the 20s on IRR basis if we would build a hotel from the ground up and sell it. If we are looking at a stable type of cash flowing deal, it has to be well north of 15-18 percent average returns upon stabilization of the hotel.
OBEID: For an independent hotel development in Manhattan, we would want to land about $450,000 a key all in, and develop to about 10 percent return on cost. For a renovation type project we look to land at about $525,000 a key, or an eight percent return on cost, which reflects the lower risk of taking on an existing asset and renovating it to a higher standard. We look at an IRR analysis of course, but it is less meaningful to me because there is always so much uncertainty the further out the analysis goes, and I’m hesitant to assume too much of the overall return is upon sale.
MORSE: We are looking for high teens return, 17-20 percent over a 5-to-7 year hold period. I would not want to have a basis in a select service hotel of greater than $500,000 a door, full service or boutique. Select service is more commoditized and I think if you are in for 350-400 you are probably good.

POSIL: Opponents of Airbnb claim that it creates a large shadow market which is depressing hotel values, would you agree?
MORSE: I think Airbnb is very harmful to New York City hotel market. Apparently Airbnb has sixteen thousand rooms right now marketed in New York City. They are violating New York code, they create a disruptive living environment for residents who live near a rental apartment, they violate health codes and fire safety codes, they do not pay occupancy tax, or the Javits Center tax. It is illegal and I hope that Eric Schneiderman pushes his case and Mayor de Blasio keeps pushing it and increases the enforcement arm of the city agencies that go after these guys.
OBEID: One of the more troubling aspects of Airbnb is that it really hurts renters in the City. Most working class New Yorkers do not realize it, but as people put large inventory of apartments on line with Airbnb to earn marginally higher income, the New York working class will feel the impact of rising rents. Plus, I think that the new luxury condo market will be the first area to crack in this cycle. It is not hard for me to see developers putting a lot of unsold condo inventory of luxury units on Airbnb in very large numbers, which would have further impact to the hotel industry.
HIDARY: The nefarious aspect of the Airbnb is that it really does hurt renters in the city. As owners of buildings put their apartments on line with Airbnb or as individual apartment owners lease their apartment on a short-term basis to whomever, the guy or gal that is trying to rent a decent apartment is going to feel the impact of rising rents because of that, so it really needs to be curtailed.

Art of Construction at Stella Tower