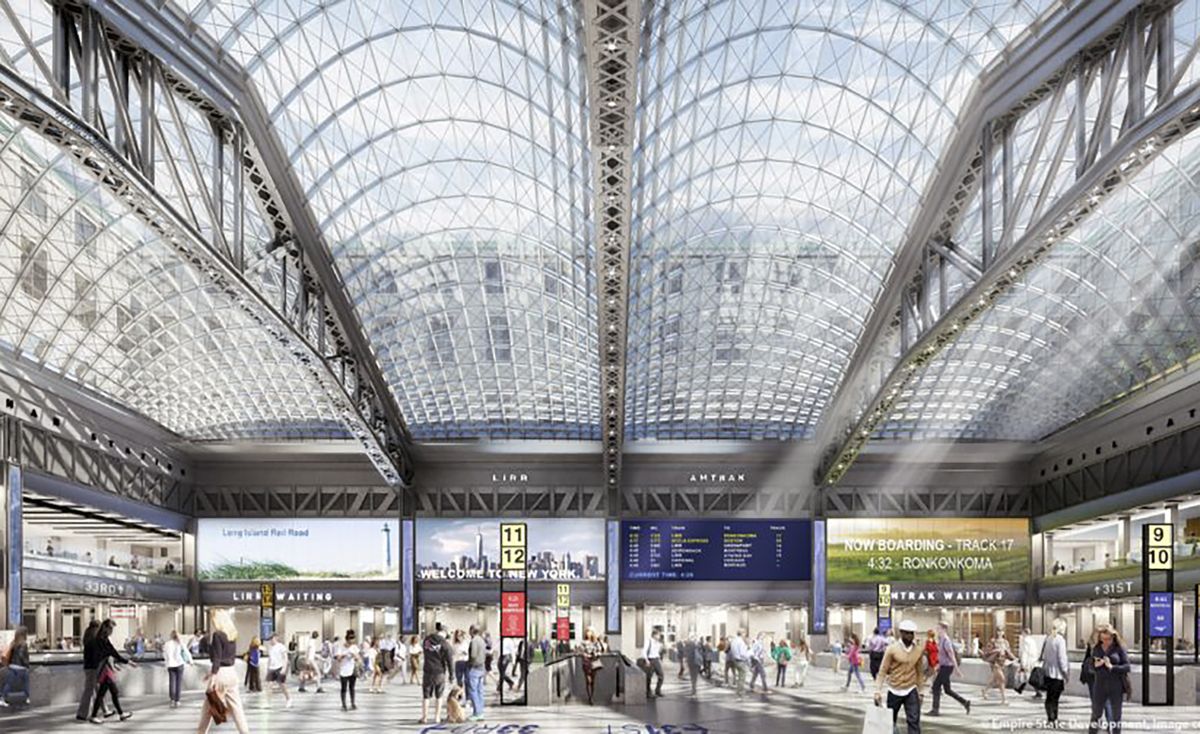 One of New York’s most ambitious transportation and infrastructure upgrade in decades, the project was funded with $550 million from New York state; $420 million from Amtrak, the Metropolitan Transit Authority, the Port Authority of New York and New Jersey and a federal grant; and $630 million from the developers, Related Cos. and Vornado Realty Trust.

Named after the late Senator Daniel Patrick Moynihan, the new255,000 s/f  train hall in the James A. Farley Post Office building, will serve Long Island Rail Road and Amtrak passengers ferrying some 650,000 people who travelled through the station every day before the pandemic.

“New Yorkers have known for decades that Penn Station needed to be reimagined — and after years of work, the Moynihan Train Hall will open on time and on budget at the end of 2020,” said Governor Cuomo on Monday.

“This monumental accomplishment is a shot of hope as we come out of one of darkest periods in our his-tory and sends a clear message to the world that while we suffered greatly as a result of this once-in-a-century health crisis, the pandemic did not stop us from dreaming big and building for the future. The new Moynihan Train Hall is the embodiment of New York Tough.”

Major construction on the project began in 2017 and proceeded on-time and on-budget with a public-private development team that included Empire State Development, Vornado Realty Trust, Related Companies, Skanska, the MTA/LIRR, Amtrak, and the Port Authority of New York and New Jersey.

It was delivered via a design-build partnership that created 17 new rail tracks, state-of-the art way-finding, designated customer service locations for each railroad service operator and a dedicated lounge for nursing mothers. There will be a free public Wi-Fi network and a massive central atrium with a 92-foot-high skylight.

As well as LIRR and Amtrak the train hall will eventually also serve Metro-North commuters with each operator providing customer service and waiting areas. Later this year, it will also host the new Acela high-speed trains that will serve the Boston-Washington corridor at speeds upto 165 mph.

The old Penn Station will continue to serve New Jersey Transit commuters, as well as Amtrak travelers between 1 a.m. and 5 a.m., when the Moynihan Train Hall will be closed to the public. The facility has been undergoing cosmetic and structural renovation in recent years.

New York Governor Andrew Cuomo has a plan to expand rail capacity at Penn Station by about 40 percent, purchasing land south of the existing station to add four train concourses and eight lengths of track.

The redevelopment includes a mixed-use development featuring office, retail and dining space. Facebook signed a lease earlier this year for 730,000 s/f of the office space.