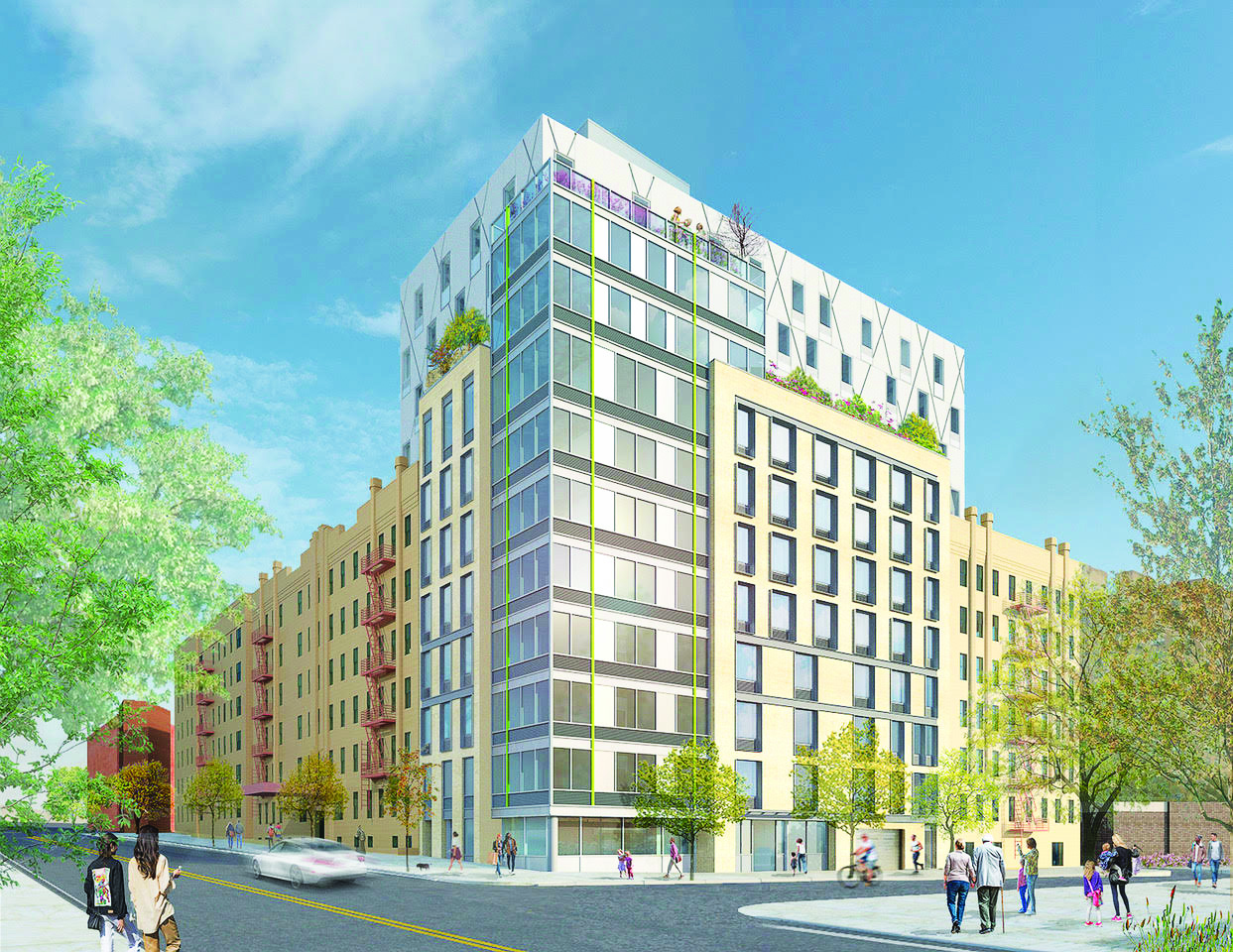 Permits have been filed for a long-awaited new Prospect Park apartment building.
RKTB Architects said this week that work on One Sullivan Place (pictured top) is expected to begin “soon” with completion likely in 2020.
Developed by Sterling Town Equities, the 12-story multifamily tower design includes two 30-foot cantilevers over the adjacent low-rise buildings on either side.
Utilizing the space above the neighboring residences brings the total square footage of the project to roughly 59,000 square feet, for a total of 54 one-, two- and three-bedroom units plus shared amenities.
According to Peter Bafitis, AIA, managing principal with RKTB, the design also calls for below-grade parking for residents.
“Our design for the cantilevered portions leverages the undeveloped space above the neighboring buildings,” says Bafitis, “but with the massing set back so it does not dominate the original architecture of the existing buildings. Likewise, we have designed the facade to show sensitivity to the architectural context of this beloved New York City neighborhood and its proximity to Prospect Park across the street.”

30 Warren, a boutique luxury condominium in Tribeca, has released a sneak peek of its precast concrete facade, an ambitious design crafted by Francois Lininger of French firm Post-Office Architects.
Lininger’s modern twist on the cast iron and stone aesthetic of Tribeca — and the work that went into creating this look with over 70 different molds from corrugated cardboard — in now coming to life.
According to Leininger, “The texture of the precast panels at 30 Warren, achieved by casting concrete over strips of corrugated cardboard laid at a 45 degree angle, creates an ever-changing facade.
“The panels’ color changes depending on the light and the position of the observer, going from light grey to merely black in the blink of an eye, registering the smallest inflection of daylight.
“The panels look at times crafty and mineral, and at times soft and light like corduroy.”
Developed by Cape Advisors the 12-story building has 23 one- and two-bedroom homes with a limited selection of three-bedroom and penthouse residences with direct elevator entry reserved for the top floors of the building.
Each residence will feature open floorplans and select residences will also feature outdoor space.
Amenities include a full-time attended lobby fitness center with yoga studio, children’s playroom, bicycle storage, package room with refrigerated storage, and laundry room.
Sales and marketing is being handled by Corcoran Sunshine Marketing Group.

Front and York – the Morris Adjmi-designed development transforming an entire city block in DUMBO at 85 Jay Street – just launched it’s teaser site, offering the first glimpse inside the neighborhood’s first resort-style residential experience.
Front and York will be home to one of the most comprehensive amenities packages in all of New York City.
The development is introducing a 150,000 s/f resort-style amenities experience that includes one of the City’s largest private parks and a rooftop pool deck with cabanas and a view of the Manhattan skyline.
Lifestyle spaces will include co-working lounges, chefs kitchens, private dining rooms and a porte cochere to complement the building’s private parking.
Co-developed by CIM Group and LIVWRK, Front and York will launch sales this year.

With topping out slated for early summer and first closings in the first quarter of 2020, the soon-to-be tallest residential building in the world, Central Park Tower, has officially listed availability on its website.
Starting on the 32nd floor, Central Park Tower features 179 ultra-luxury residences ranging from two- to eight-bedrooms.
Seven units within the building were recently listed, including a two-bedroom on the 33rd floor for $6.9 million and a five-bedroom on the 112th floor for $63 million.
Designed by Adrian Smith + Gordon Gill Architecture (AS+GG), with interiors by Rottet Studio, each residence offers grand living and entertaining spaces, floor-to-ceiling windows, unencumbered views and gracious layouts.
The building’s Central Park Club will offer 50,000 s/f of amenities spread across three floors.
At the base of the building will be the new 320,000 s/f seven-story Nordstrom NYC Flagship store.

325 Ferry Street, northern New Jersey’s newest collection of luxury rental residences in Newark’s North Ironbound neighborhood recently debuted to the public.
The development includes a collection of 91 luxury rental residences, street-level retail space, a 5,000 s/f sports bar and Chic Doggie pet grooming salon+.
Two-bedroom s offering 1,100 s/f of living space are currently available from $2,363.
T. Gary Gutjahr, who developed the property along with his partner J. Gordon Gutjahr, said, “The North Ironbound neighborhood is incredible. Renters enjoy a considerable value when compared to areas like downtown Jersey City and Hoboken, while receiving all of the benefits that have made those neighborhoods popular over the years.”
The transit-friendly location offers access to a daily private shuttle that delivers residents to and from both Newark Penn Station and the Harrison PATH station, where they can reach the World Trade Center in about 20 minutes.
Coldwell Banker New Homes is the exclusive marketing and leasing agent.