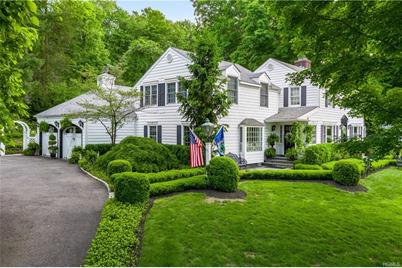 The country home of Emmy-winning TV host and best-selling author Sandra Lee and New York Governor Andrew Cuomo is listed for sale with Houlihan Lawrence.
Offered at $2 million, the Westchester County property, known as Lily Pond, is located at 4 Bittersweet Lane in Mount Kisco (pictured top).
A quintessential American Colonial, the home is 4,129 s/f and was restored and personally decorated by Lee.
Book-end fireplaces grace the all-white living room, dining room, family room and master bedroom.
There are four bedrooms, five baths and a second floor master suite.
There is also a dressing galleries, laundry room, two-car garage, a potting shed, and detached workshop.
Lee — the author of 25 cookbooks and host of home, food and lifestyle programs and Cuomo — a politician, author, and lawyer serving as the 56th governor of New York — no longer need a large home now that Cuomo’s three daughters are adults.
They intend to split their time between New York City, the Governor’s Mansion/Albany, and the Hamptons.
Lily Pond is listed by Harriet Libov, an agent in Houlihan Lawrence’s Armonk office.

THE PRESIDENT of Kohn Pedersen Fox, James von Klemperer, just purchased a $4.85 million condo at The Bryant.
Designed by Sir David Chipperfield and developed by HFZ Capital Partners, The Bryant is the first ever residential condo built on Bryant Park and the first ground-up residential tower in New York City designed by the British architect.
Von Klemperer’s unit is the same layout as The Bryant’s brand new model residence, showcasing how to live with art rather than view it in a gallery.
But the best thing about his new digs? von Klemperer will get a bird’s eye view of the now rising One Vanderbilt, the skyscraper that he designed for SL Green.


THERE HAS been a reality check at the most expensive home ever built in New Jersey.
Dennis McCormack at Prominent Properties Sotheby’s International Realty has listed the so-called Stone Mansion in Alpine for $36 million.
The ask is $32 million less than developer Richard Kurtz wanted when he built it in 2006.
The 42-room home has lain empty since, although a care-taking staff has been on hand to keep it ship shape for a buyer one day.
If anyone can find one, its McCormack. In the past five years, he’s moved over $400 million worth of bricks.