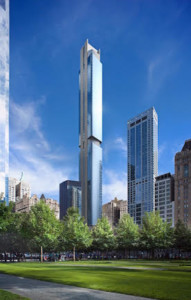 Located a block from One World Trade Center and the Santiago Calatrava-designed Oculus, 125 Greenwich will have 273 units ranging from studios to three-bedrooms, and a triplex of amenities at the top of the skyscraper.
The top three floors will be dedicated to lifestyle and wellness amenities with skyline and water views, including a 50 ft. lap pool, spa with sauna and steam room, fitness center with private training room and yoga studio, private dining and event space and a screening room.
Douglas Elliman Development Marketing is exclusively handling the sales and marketing for 125 Greenwich Street at prices starting at $1.2 million for a studio to $4.625 for a three bedroom.
“125 Greenwich Street is the new model for Downtown New York living,ˮ Davide Bizzi, chief executive officer of Bizzi & Partners Development.
“The collaboration between Rafael Viñoly and March & White is a lesson in exceptional craftsmanship, attention to detail, and artful design. Luxurious amenities … on the top three floors of the building produce an exclusive private club experience. All of this will offer residents a distinct cosmopolitan lifestyle that can only be found in New York.”

BRGDM, the recently launched development marketing division of Bohemia Realty Group, has been awarded the exclusive marketing contract for The Ammann at 40 Pinehurst Avenue, on the corner of 179th Street, in Hudson Heights.
The eight-story condo development, currently under construction, will consist of 24 one- and two-bedrooms, including four two-bedroom penthouses, and two ground-level commercial spaces. “This is an absolutely stunning project, with generous floor plans and fabulous amenities buyers dream about,” said Beth Gittleman, head of Sales and Development for BRGDM and Bohemia Realty Group. 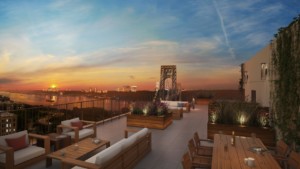 “Not only do many of the units have views of the Hudson River and GW Bridge, all will have private outdoor space.”
Named for Othmar Ammann, the Swiss-American structural engineer responsible for designing the George Washington Bridge, the condo is being developed by Orient Development. Led by James Wu and Helen Wang, the company’s work in Upper Manhattan was most recently seen at Edgecombe Parc at 456 West 167th Street.
The architect on the project is Nickolas D. Kazalas RA of ND Kazalas Architecture F.C.
Units will have triple-pane windows with curtain wall systems, individually monitored air and heating, and in-unit washer/dryers.
Amenities will include a rooftop deck, lobby level zen gardens, fitness room, bike storage, package room, smart phone door access and control app system, and video intercom with security monitoring system. 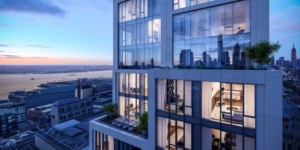 New renderings have been released for 570 Broome Street, a boutique 25-story new development in Hudson Square, between Varick and Hudson Street.
Designed by New York-based BUILTD architects with interiors by SOM, 570 Broome will rise 25 stories and consist of 54 one-, two-, and three-bedroom homes.
Amenities will include a fully-attended double height lobby, garden, residents’ lounge and game room with landscaped outdoor terrace, fitness center, bike storage, and private storage units available for purchase.
Residences will start at $1,350,000, and sales are expected to launch this fall. Stribling Marketing Associates is handling the exclusive sales and marketing for the project.

● K. HOVNANIAN
Next Port of call for buyers 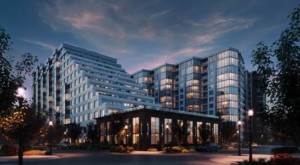 There are 32,000 s/f of amenities that include an infinity-edge pool and hot tub overlooking Manhattan, a two-story fitness center, fire pits and outdoor lounge as well as 24/7 concierge services. Alexander Hovnanian, area president for K. Hovnanian at Port Imperial Urban Renewal VI said sales are being handled in-house. Residences range from 773 s/f one-bedroom homes to 2,580 s/f three-bedrooms priced from the $600,000s to $6 million.
The property benefits from a 20-year tax abatement program.

Hoboken-based Manhattan Building Company has begun leasing at SoHo Lofts, its new development in Jersey City.
The “industrial-inspiredˮ rental has 377 apartments housed in two separate 13-story and 20-story buildings connected by a five-story podium, where a lobby, amenity center and parking garage are located.
City Homes and Gardens is directing leasing at SoHo Lofts, located at 273 16th Street and the second phase of the larger SoHo West neighborhood concept being developed by Manhattan Building Company.

The first phase, The Cast Iron Lofts Collection, is complete and occupied and includes 387 apartments and 20,000 s/f of retail space.
Louis Mont, COO Manhattan Building Company, said dubbing the stretch of Jersey Avenue leading into Hoboken “SoHo Westˮ reflects its location South of Hoboken, West of New York City.
“The creation of the SoHo West has been incredibly well-received as evidenced by the high leasing velocity we experienced in phase one,ˮ Mont.
“We’re thrilled to now bring to market the next offering of residences which will add a brand new signature mixed-use building with enhanced recreational options and social interaction to the neighborhood.”
SoHo Lofts features one-, two-, three and four-bedroom apartments, as well as a limited number of private townhome rentals, initially priced from the $2,000s.