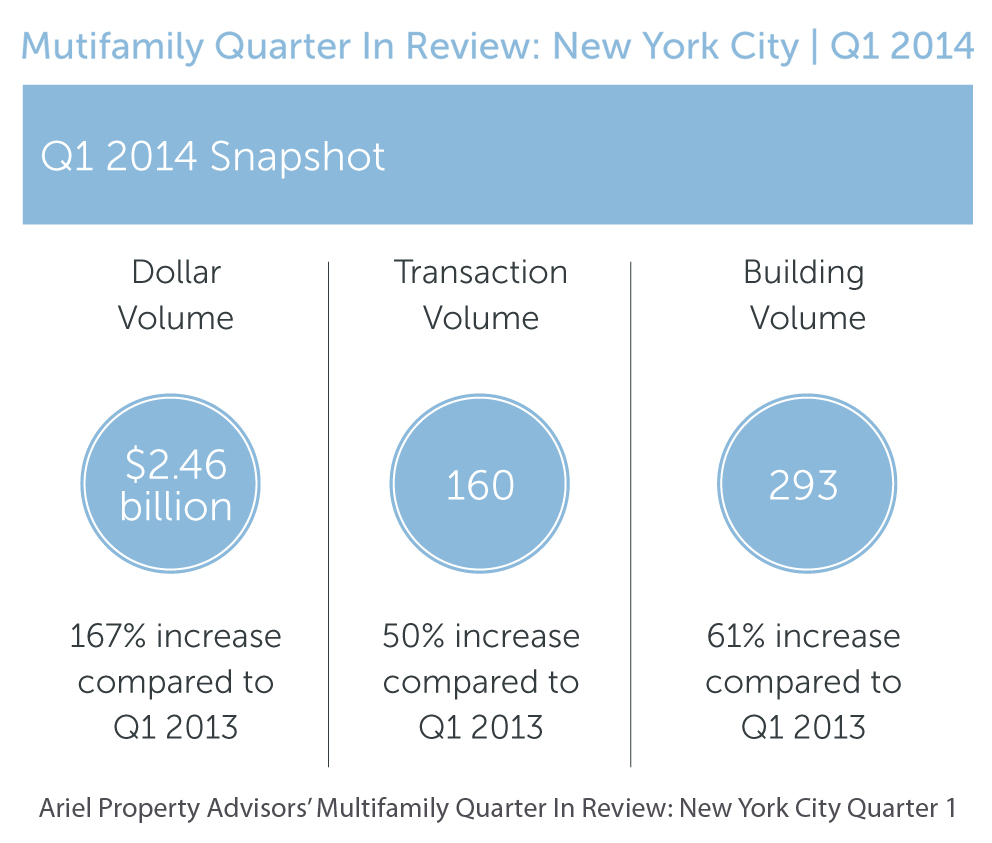 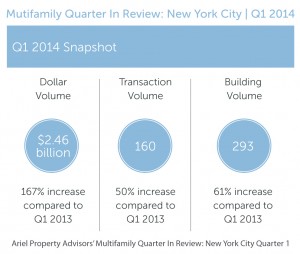 percent in the first quarter of 2014 compared to the same quarter last year, according to Ariel Property Advisors’ Multifamily Quarter in Review: Q1 2014.

First quarter 2014 volume declined compared to the fourth quarter 2013 volume of 207 transactions consisting of 392 buildings totaling $3.25 billion because of the seasonal rush toward closings at the end of the year.

Multifamily pricing advanced considerably year-over-year, as every submarket covered in the report showed gains across pricing metrics in the six months ended March 2014.

“The impressive year-over-year gains in transactions, dollar volume, and pricing in the first quarter continued the trend we saw in the latter part of 2013 when large institutional deals dominated sales activity,” said Shimon Shkury, president of Ariel Property Advisors. “Our firm’s contract signings and bidding activity indicate that this trend will continue.”

In Manhattan, transactions increased 45 percent to 29 and the dollar volume of the trades jumped 156 percent to $878.7 million in the first three months of this year compared to the same period last year. Pricing continued to surge as well, with average cap rates over a six-month period falling to 3.85 percent – 80 basis points below the same figure a year ago.

Portfolio transactions contributed to another strong quarter for the Bronx. Transactions increased 70 percent to 34, the number of properties sold jumped 172 percent to 68, and the dollar volume of those trades soared 322 percent to $363.858 million. The borough’s leading transaction for the quarter was a $90 million sale of a portfolio of multifamily buildings to a partnership consisting of The Related Companies and city pension funds. The sale represented $124 per square foot and $123,748 per unit.

Queens started the year strong as portfolio sales led to major gains in dollar volume for the borough. The $258.361 million in sales was nearly five times the dollar volume seen in the first quarter of 2013. The number of multifamily buildings sold increased 162 percent to 34, and neighborhoods like Astoria and Sunnyside saw transactions top $275 per square foot.

Northern Manhattan multifamily sales transactions took a breather in the first quarter of 2014 from the frantic pace of deals that took place at the end of 2013. The submarket saw 21 sales comprised of 32 transactions totaling $195.970 million. The vast majority of the deals were below $10 million.