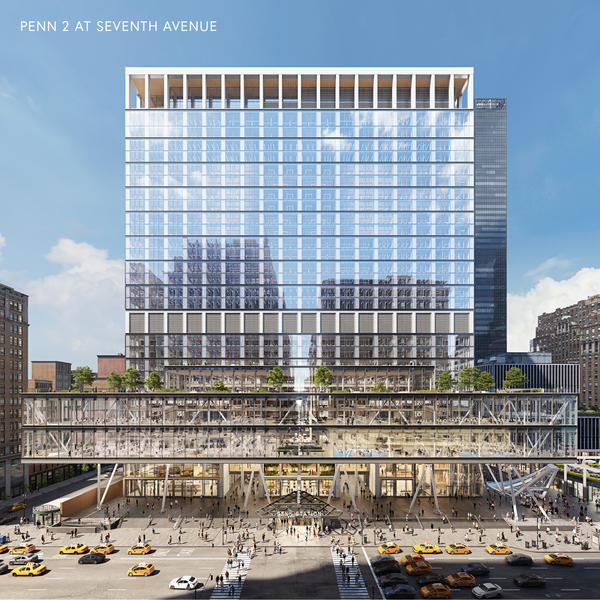 PENN 2 is in the midst of a full redevelopment as part of Vornado’s multibillion-dollar transformation of the PENN DISTRICT.

Slated for completion in the second half of 2023, the redevelopment of the 1.8 million square foot PENN 2 will offer creative space and an amenity package. It will feature a modern, triple-pane glass curtain wall with floor-to-ceiling windows and more than 65,000 feet of outdoor space for tenants and guests, including a rooftop park, 16 loggias and three terraces.

PENN 2 occupies one of the few double-wide blocks in New York City, directly on top of Penn Station, between Seventh and Eighth Avenues and 31st and 33rd Streets.

Steven Roth, Chairman and Chief Executive Officer of Vornado, commented, “We are delighted to continue our long-standing partnership with MSG, the world’s premier sports and entertainment brand. MSG’s commitment to PENN 2 continues the momentum we are generating in the PENN DISTRICT, where we are creating a one of a kind, next generation work environment at the heart of New York City’s thriving West Side.”

James Dolan, Executive Chairman and CEO of MSG Entertainment, said, “Vornado has been a great partner and we are pleased to have reached this agreement, which keeps our corporate headquarters at PENN 2 – in the heart of the city next to our Madison Square Garden Arena.”

Vornado’s transformation of the PENN DISTRICT, where it owns 10 million square feet, is well underway, anchored by the redevelopments of The Farley Building including Moynihan Train Hall as well as PENN 1 and PENN 2, which together will comprise a unique, two-building 4.4 million square foot, interconnected campus. As part of the PENN 2 redevelopment, Vornado is creating fully remodeled entrances into Madison Square Garden to further enhance the fan experience.