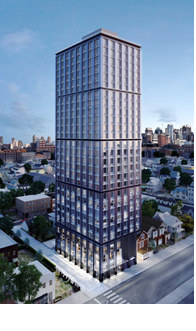 SCALE Lending announced that it has completed a $96 million combined construction and land loan in Journal Square, Jersey City.

The financing, which was arranged by Greystone, includes both the ground-up construction of a 235-unit, multi-family development at 26 Van Reipen Avenue and the acquisition of 400,000 s/f of fully-entitled land at 626 Newark Avenue, allowing for 576 future units.

Located in the Journal Square neighborhood of Jersey City, NJ, the development is near an active business district at Journal Square, open park area at Lincoln Park, the PATH train, and the Hudson River across from the southern end of Manhattan. Namdar Group is the developer of the 235-unit development and AJD Construction will be the general contractor.

“To be able to work again with the Namdar Group, who is an institutional developer with a proven track record in the marketplace, is a great opportunity for SCALE. We believe in working with top tier sponsors on a repeated basis as they grow their portfolios,” said Martin Nussbaum, Co-Founder and Principal of Slate Property.

“We are excited to get to work with SCALE once again as they have proven themselves to be a true leader in the market with a clear vision for how to tackle seemingly complex projects,” said Effy Namdar, Chief Investment Officer, Namdar Group.

“This deal is our second venture with SCALE, who has become one of our most trusted lenders, and we look forward to building on this relationship in the future as we undertake innovative developments that continue to strengthen Jersey City and the Greater New York market,” said Andrew Namdar, Chief Financial Officer, Namdar Group.

Namdar is part of a construction boom in the jersey City neighborhood that will bring thousands of new apartments over the next few years.

As part of that plan, the historic Loews Jersey Theater is being transformed into a $72 million state-of-the-art performance venue, and a new five-story courthouse complex designed by Rafael Viñoly Architects will include a 75-seat public food court, a self-help law library, a children’s play area, training spaces, and a 459-space parking garage. A new museum is also being developed in partnership with France’s Centre Pompidou at the historic Pathside Building at 25 Sip Avenue.

Among the developers busy in the neighborhood, Ironstate, in partnership with Panepinto Properties and Kimmel LLC, is building a second Urby tower at 532 Summit Avenue. The company’s first Urby in Downtown JC – built in partnership with Mack-Cali – was completed two years ago.

Also in the mix in New York-based HAP, which is building a 42-story tower at 500 Summit Avenue with 902 rental units, retail space and a municipal park, which will be deeded to Jersey City upon completion.

Sequoia Development and GRID Real Estate are building a 16-story tower at 289 Jordan Place with 300 rental units and 4,000 s/f of retail space.

Namdar Group is adding 26 Van Reipen Avenue and 626 Newark Avenue to a pipeline that includes a 20-story rental at 26 Cottage Street, and a combined six new towers designed by C3D Architecture the company is developing in and around Journal Square.