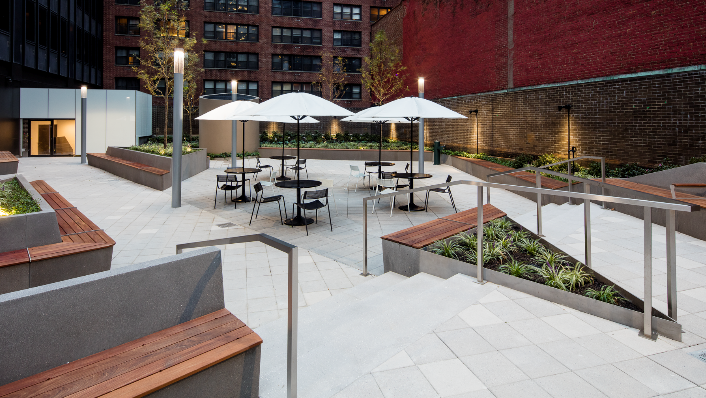 L&L Holding Company has completed the construction and redesign of the plaza and public spaces at 600 Third Avenue.

The company – in the midst of a program to enhance and modernize its entire NYC commercial real estate portfolio – partnered with architectural firm Gensler and construction company OmniBuild Construction to make over the building’s privately-owned public space (POPs), which is situated on the west side of Third Avenue between 39th and 40th Streets.

The new plaza consists of a series of criss-crossing pathways of concrete pavers that encourage pedestrians to circulate in the park.

At the plaza’s entrance, a decorative slat wall, made of Ipe wood, becomes a welcoming feature at the street-edge.  Other spaces between the pathways become zones to accommodate loose seating, consisting of cafe tables with umbrellas and chairs.

In the evenings, lighting within the planter beds illuminate the greenery.  In time, the exposed existing brick walls around two sides of the park will be covered in ivy, completing the picturesque setting.

“We are excited and proud that, after thoughtful planning and extensive research, our vision for this busy corner of Midtown is now a reality,” said L&L Holding chairman and CEO David Levinson. “Our collaboration with Gensler and OmniBuild has yielded a beautiful and sophisticated space, which will enhance our tenants’ and visitors’ experience at 600 Third Avenue for many years to come.”

The plaza redevelopment project was the result of more than four years of planning and research. Beginning in 2012, L&L toured and photographed more than 50 public plazas in Manhattan and researched the topic on a broader scale through articles and books by leading experts. The company also sought design input from leading organizations such as the Project for Public Spaces, the Grand Central Partnership, the Advocates for Privately Owned Public Space and the Municipal Art Society of New York.

Following design development, L&L engaged Community Board 6 and collaborated with the New York City Department of Planning to solicit feedback on the plan. After securing approval from the City, construction commenced in 2015.

Now complete, it is the first major renovation of the plaza since the property’s original construction in 1970. L&L acquired the building in 2004.

“Realizing that the space was greatly underutilized by tenants at 600 Third Avenue and the general public in the Murray Hill neighborhood, we set out to provide a great public space with a variety of seating and landscaping that is much more open and welcoming to tenants and the public,” said Robert McClary, VP, Asset Management at L&L Holding Company.

“It allowed L&L to achieve its goals of providing enjoyable outdoor space to our tenants and give back to the communities around our properties.”