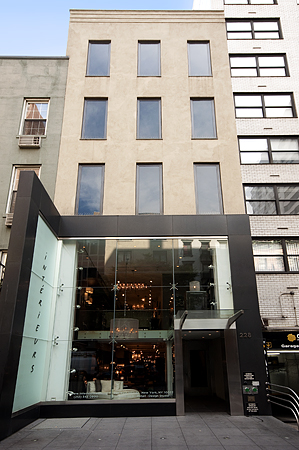 Ferrell Mittman will occupy a 2,200-s/f ground floor showroom, a 1,000-s/f second floor showroom with outdoor display patio and a 500-s/f lower level storage, which is the entire retail space. The tenant relocated from the Decoration & Design Building, which is located on Third Avenue between 58th and 59th Streets.

ABS Partners’ Dean Valentino represented the tenant in the transaction, while Jedd Horn, Nicole Mendelson and Michael Thomas of Collier’s International acted on behalf of the landlord.

420 Lexington Avenue was originally named after its major tenant, Graybar Electric Company, a significant early communications and telephone firm whose corporate headquarters was located in the building from 1927 to 1982 before returning to the building in 2014.

Located on Lexington Avenue and 43rd Street, the Graybar Building provides direct access to Grand Central Terminal through the Graybar Passage, a stunning Romanesque hall of vaulted ceilings and bronze chandeliers. A mélange of Babylonian and Byzantine motifs, the building’s cubist setback massing is enlivened by relief sculptures, tile and metalwork, including figures that flank the monumental entries bearing the symbols of the four elements of earth, water, air and fire. Interiors include elaborately polychromed ceilings and ornamental bronze grills, doors and fixtures as well as wall and floor mosaics. A fanciful touch are the metal rats that adorn the ship cable-like struts of the main entrance – a detail architect John Sloan intended to strike a “maritime note” in keeping with Grand Central Terminal’s significance as a transportation hub.

The Graybar Building was designated a NYC Landmark in 2016. The 31-story, 1.5 million-s/f tower was once among the largest office buildings in the world. Today, it is a Class-A office building. Other tenants include New York Life Insurance, Metro-North Commuter Railroad Co. and SL Green Realty Corp.

Jonathan Stravitz of BIOC Commercial Real Estate represented the tenant in this transaction, while SL Green was represented in-house.

Founded in 2010 and based in TriBeCa until earlier this fall, MI&C is a marketing firm whose clients include Sephora, H&M, Ralph Lauren, Tiffany, Girls Who Code and Google. The firm currently occupies a pre-built suite on the ground floor of the Breeze and will move into a custom built space on the complex’s second floor this spring.

The Hallmark store at Hamilton Plaza will relocate and expand at the popular Hamilton Township shopping center. Norman’s Hallmark, the largest independent Hallmark Crown chain in the United States, recently purchased the Hamilton Plaza operation; in its new location, the card and specialty retail shop will occupy 7,100 s/f. The 175,500-s/f retail property is exclusively leased and managed by Levin Management Corporation (LMC). LMC Senior Leasing Representative Sidney Singer arranged the Norman’s Hallmark lease renewal – which includes moving within the center to a space 2,700 s/f larger than the original.

ON THE SCENE: Bestreich Realty Group announcessale of 341 Lenox Road