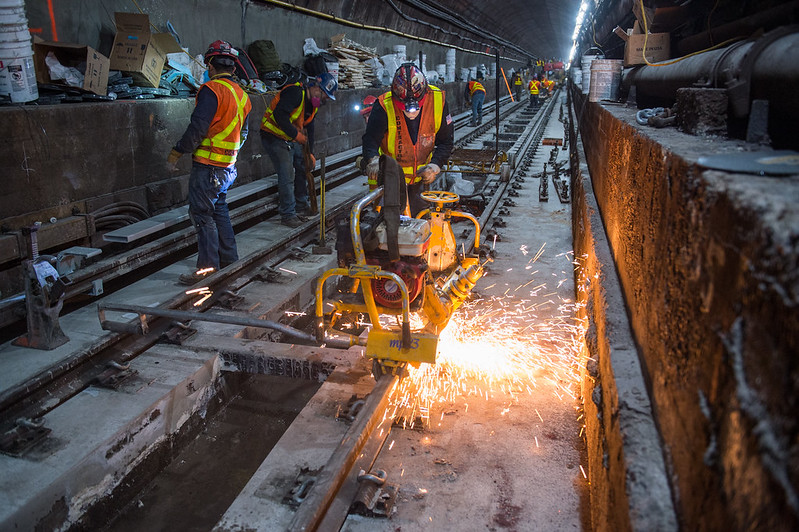 The opening came after Cuomo intervened in January 2019 with his own panel of engineering experts who determined a disruptive total shutdown was unnecessary.

Completion came through under budget, saving more than $100 million in project costs, according to the governor’s office.

In January of 2019, with a full L shutdown looming to repair damage from Superstorm Sandy, Cuomo’s convened academic leaders to review the two L tubes and determine if the rehabilitation work could be completed in a more efficient manner.

Following their review, the team recommended new construction methods and technology that have been used in transit systems around the world and several industries, yet never before integrated in a similar project in the United States.

Once rehabilitation work began in April, these techniques allowed New York City Transit to continue to run subway service in the tunnel throughout construction so that regular weekday commutes for the bulk of L customers between Manhattan and Brooklyn were not disrupted.

Initially, NYC Transit had planned to close the entire L train tunnel to demolish and reconstruct the tunnel’s infrastructure.

The completion of the tunnel rehabilitation project comes amidst the unprecedented challenges of the COVID-19 global health pandemic.

To ensure the project remained on schedule for completion, MTA Construction & Development implemented aggressive health and safety protections for employees and contractors, including launching a new daily reporting app, mandatory use of personal protective equipment, around-the-clock disinfection of contact surfaces, a ban on sharing of tools and closure of common facilities.

Recalling how he was accused of meddling in areas he knew nothing about, Cuomo hailed the tunnel opening saying, “ We did it anyway, and we went ahead with it. And we rebuilt the tunnel, and the tunnel is now done better than before, with all these new techniques.

Government must lay foundations for a more affordable tomorrow

Daniel Boulud rolls up his sleeves to help feed medics