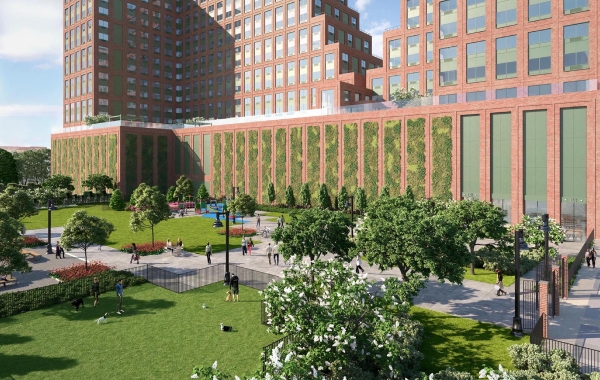 RKF has been hired to exclusively market the retail space at 485 Marin Boulevard, in the Hamilton Park neighborhood of Jersey City. RKF is seeking tenants for 940 and 710 s/f spaces.

The 940 s/f retail space is directly adjacent to the lobby, with visibility and exposure on Marin Boulevard. The 710 s/f space offers outdoor seating directly on a public park.

“485 Marin is an excellent opportunity for regional or local New Jersey tenants to become a part of the fabric of the Hamilton Park community in Jersey City,” explained Mackowski. “These spaces present opportunities for retailers to serve both residents and local employees, and we envision filling the spaces with cafes, high end convenience stores and service-oriented businesses.”

The building is situated between 8th and 9th Streets in Hamilton Park, directly across from the Newport Centre mall and adjacent to a park.

It is within walking distance to both the Grove Street and Newport Path Stations, as well as the Newport Light Rail Station.

In addition to national retailers like Macy’s, Adidas, H&M, Hollister, Chick-fil-A, The Cheesecake Factory and Zinburger in the shops at Newport Centre, neighbors include local favorites, such as Milk Sugar Love Bakeshop, White Star Burger and Hamilton Pork, along with The Hamilton Inn.