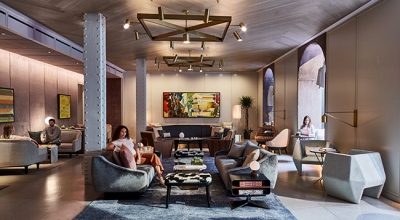 Since Chrissy Denihan was a little girl, she’s been around the family business of hotels and hospitality.
She grew up in the Lyden House hotel, a former property of the Denihan Hospitality Group’s portfolio that has since been transferred to Rockefeller University’s ownership.

During those formative years, she was exposed to the intricacies of a fast-evolving hotel industry in New York City.

Living in the Lyden House in Midtown East, Denihan absorbed everything from how the hotel’s guest service agents interacted with customers, to riding the elevators with those worldly customers who were experiencing New York for the first time.

“It’s an experience that can’t be measured,” Denihan said of her childhood. “It’s cool to see and it’s still one of my favorite things to do, to sit in the hotel lobby and watch the travelers and see how they experience our products.”

All that knowledge formed a solid foundation for her professional life. Denihan has worked for the family business for 12 years, the last of which was as vice president of asset management and development.

Currently, Denihan Hospitality Group owns and operates several luxury and boutique hotels in popular U.S. markets. Its varied collection includes The James hotels and the Affinia Hotel Collection, as well as independt outfits such as The Surrey and The Benjamin.

More recently, the company has been looking to focus more on the hotel management side of things and partnering with owners of independent, off-branded hotels.

Denihan said it’s a balancing act between ownership and management but that the company is looking to provide valuable experience in partnerships with smaller hotels.

With her executive title comes many responsibilities and Denihan has a hand in many different pies.
Her role includes managing everything from the company’s James Hotel in Washington, D.C. set to open in 2021, to the major renovation of the Shelburne Hotel at 303 Lexington Avenue under their Affinia brand in the city.

She’s also involved in the search for a food and beverage partner that matches each of their hotels, like Scarpetta at the James Hotel in NoMad, French restauranteur Daniel Boulud’s Boulud Café Boulud at The Surrey in the Upper East Side and celebrity chef Geoffrey Zakarian’s The National Bar at their Benjamin Hotel in Midtown East.

More simply, she’s responsible for making sure all of the company’s hotels perform to their highest potential, bring in the most money they can and keep their customers happy and returning.

Looking forward, Denihan said that the company is interested in other markets. Like their D.C. expansion, she said there are a few opportunities to expand their James Hotel line, whether it’s in New York or across the nation and North America.

Despite being tasked with all these duties, Denihan said it’s an exciting time for the hospitality sector. In the last decade or so, she explained that traveling has evolved and with it, their customers.

“The market and the style in which hotels and lifestyle boutiques are used has changed so much,” Denihan said. “People are using social spaces more than they were a decade ago.”

Denihan added that travelers are more interested in experiential travel, looking for experiences with their lodging and finding the right restaurant to dine in.

The VP added that the hospitality industry in New York can expect a coming tailwind as with several major projects coming online. Denihan said that with Hudson Yards, Manhattan West, Moynihan Station and JP Morgan redeveloping their new headquarters, she’s expecting a great deal of visitors and attention on New York City.

To capture that coming crowd, Denihan has put her faith in her family business’ model. To separate themselves from the crowd of luxury hotels, she pointed to the values she learned over time with her family that have found their way into the company’s operations.

From her childhood time spent in one of the hotels, to working in the family business for more than a decade, she said there are certain things that can’t be taught.

Denihan said that they prioritize how their employees treat their guests, how well they work with one another, and how they look to provide a real experience to those staying at their hotels.

“The one thing that really sets us apart is really just being honest and candid with one another,” Denihan said of her family. “I think that trickles throughout our entire [company] culture.”