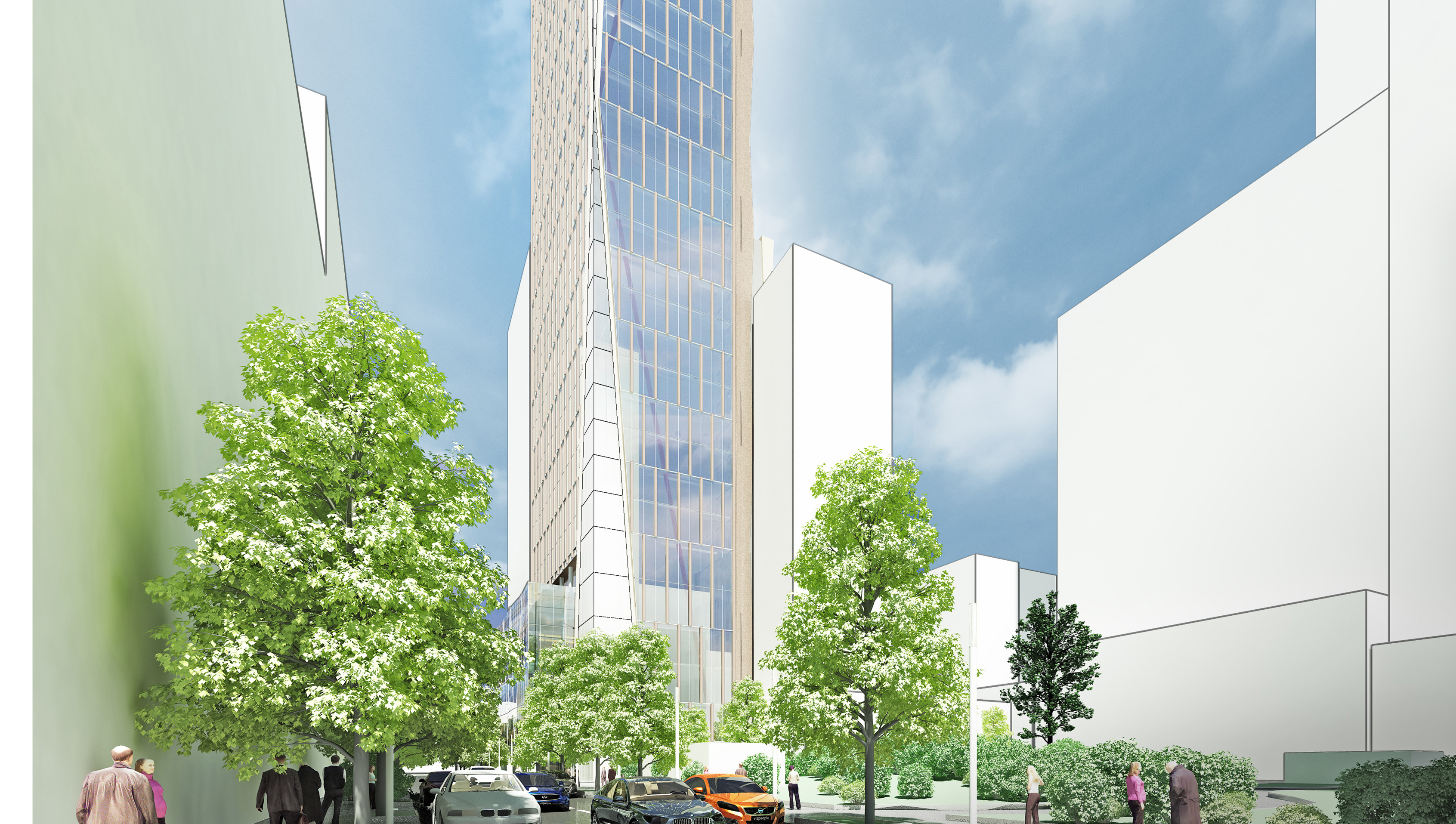 JEMB Realty is set to build a 400,000 s/f office and retail tower in Brooklyn’s Tech Triangle.

The company announced Monday that it will complete the first ground up construction of commercial space since the re-zoning of the area in 2004.

By adding at least 400,000 square feet of space, the development will help address the need for additional office space in New York City.
NYCEDC projects that 60 million square feet of new commercial office space will be needed across the city by 2025, much of it in outer borough commercial hubs like Downtown Brooklyn. “More and more businesses want to set up shop in Downtown Brooklyn, and JEMB is helping ensure that they have the space they need to thrive,” said JEMB chairman Morris Bailey.

“We’re proud to be working with Mayor de Blasio and NYCEDC on this exciting project and investing in the continued growth of Brooklyn’s economy.”

Bailey announced the new project with Deputy Mayor for Housing and Economic Development Alicia Glen, who noted that the project is the latest part of the Downtown Brooklyn Redevelopment Plan, a City strategy to revitalize the area, under which the City has made $300 million in public investments in open space and infrastructure commitments.

The announcement came as a Tech Triangle Economic Impact report by the Brooklyn Tech Triangle Coalition called for the creation of 3.1 million square feet of office space to meet the needs of the rapidly expanding workforce and business community located in the Tech Triangle. The Coalition projects that the Tech Triangle could generate $15.5 billion in economic impact by 2025, and the report highlights the need to support the future growth of the area by making four recommendations to ensure that the it remains a world-class center for innovation.

These recommendations – creating commercial and industrial working space, leveraging City assets to support commercial growth, investing in public spaces, and enhancing transit infrastructure – will help support the growing creative and tech ecosystem, which the Coalition expects to grow by 18,000 jobs in the next 10 years.

“We want to make sure that companies keep starting-up, innovating and growing in the Tech Triangle. And the City can spur that growth by making sure innovators have the office space they need,” said Glen.

“This is a fantastic project that will stoke Brooklyn’s economic engine and deliver the kind of high quality jobs and careers we want to secure our place in the 21st Century economy.”

NYCEDC President Maria Torres-Springer noted. “In our efforts to support entrepreneurs and encourage economic opportunity and job creation, we are finding ways to utilize City-owned assets by leveraging the power of public-private partnerships, capitalizing upon every opportunity to create the space innovative businesses need to thrive, expand and create the jobs of today and tomorrow.”

Downtown Brooklyn Partnership President Tucker Reed, said, “In 2004, Downtown Brooklyn was rezoned with a primary aim of creating new office space, but since then we’ve experienced a residential boom instead.

“It’s time for our commercial inventory to catch up, and today we can see how leveraging government owned assets to help the marketplace achieve public goals helps get us there. That’s smart economic development policy.”

“The demand for commercial space in Downtown Brooklyn is far outweighing the supply, a direct impact on our ability to create local jobs and support the needs of our burgeoning community,” said Brooklyn Borough President Eric L. Adams. “Developing 420 Albee Square for commercial and office usage is an important piece of the larger puzzle we must solve.”

With commercial vacancy rates well below the national average, demand for flexible and modern commercial and office space in New York City is extraordinarily strong and is expected to continue to grow.

The 420 Albee development is part of the overall Willoughby Square project, which will also bring a new one-acre public open space atop a fully automated below-ground parking garage. City Point, a mixed-use development is also creating thousands of square feet of retail, office and residential space; and the Made in NY Media Center by IFP, is a 20,000 s/f center providing workspace for entrepreneurs and innovative media projects and companies

At 420 Albee Square, JEMB is expected to use NYCEDC’s HireNYC program for disadvantaged workers, as well as commit to contracting goals for minority and women-owned business enterprises.