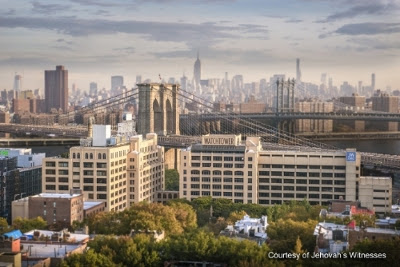 The religious denomination, Jehovah’s Witnesses, has put three Brooklyn properties, including its world headquarters, on the market.

The buildings, which are located in the neighborhoods of Dumbo and Brooklyn Heights, are expected to be sold in separate transactions, according to a press release.

The main draw in the offering is 25-30 Columbia Heights, which has served as the group’s world headquarters for decades.

The property, which has 733,000 s/f of space, occupies almost two city blocks. The building is known for its large sign that reads “WATCHTOWER.” The marquee, which was installed after the denomination bought the building in 1969, has long been a neighborhood landmark.

The group is also selling 85 Jay Street in Dumbo and 124 Columbia Heights in Brooklyn Heights.

85 Jay Street occupies an entire city block and offers about a million square feet of development rights. Meanwhile, 124 Columbia Heights, which offers 152,000 s/f of space, was built in the early 1920s.

The denomination is currently exiting Brooklyn as it relocates its world headquarters to Warwick, New York. In a blog post on its website, the group said that it is moving to save money.

“Branch offices of Jehovah’s Witnesses in other parts of the world now share in the printing of Bibles and Bible-based literature, which was once exclusively done in Brooklyn… Cost, too, was a consideration. It is expensive to operate and maintain the facilities in Brooklyn. By relocating to a compact facility, the Witnesses can make better use of funds to support their work of Bible education,” the entry read.

In the listing for the properties, Watchtower Real Estate invited prospective buyers to “visit the individual property websites, sign a Confidentiality and Non-Disclosure Agreement, and learn more about the properties.”

In 2013, the Jehovah’s caused a flurry of excitement in the market when it released a five-building protfolio in Brooklyn which was ultimately purchased for $375 million by RFR, LIVWRK and Jared Kushner.
ecommerce site Etsy was later signed as the anchor tenant for the one million feet office and retail conversion

The Jehovah’s Witnesses have 16 other properties in their New York City portfolio.