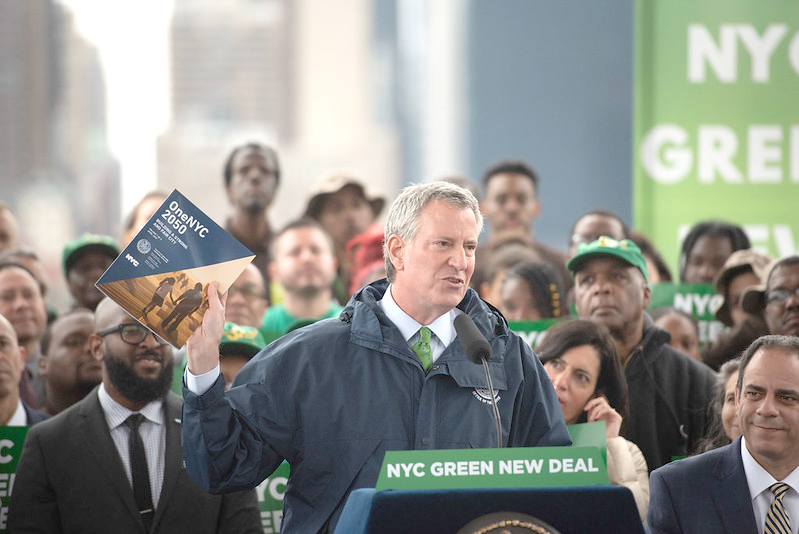 The developer of one the nationʼs most sustainable new developments was left baffled by Mayor Bill de Blasioʼs claim theyʼd got it “wrong.”

“We’re going to make very clear that the kind of the glass and steel buildings of the past, and some, bluntly, were being built very recently, are just not going to be allowed any more … some of the ones at Hudson Yards actually are examples of the wrong way to do things,” said de Blasio.

However, a spokesman for Related Companies, which built the $25 billion Hudson Yards, pointed out, “Ten Hudson Yards, a glass building and first to open in our Hudson Yards project, is LEED platinum and one of New York’s most energy-efficient Class A office towers.

“It houses gas-fired micro turbines that generate power, hot water and chilled water with twice the efficiency of standard systems — even in the event of a power outage, and a storm water retention tank to harvest rainwater that replenishes cooling towers and irrigates the building’s terrace landscaping.”

The spokeswoman added, “Hudson Yards was planned as the largest LEED neighborhood in New York City. A first-of-its-kind microgrid powered by two cogeneration plants is estimated to reduce greenhouse gas emissions by 25,000 MT of CO2 annually. 10 million gallons of storm water will be collected each year at HY and will be reused in mechanical and irrigation systems.”

There was no response from the Mayors office on his claims, but energy experts pointed out that the New Green Deal is a mandate not a law.

“What I think [the city] will try to do is have a discussion with the real estate industry with contractors and glass manufacturers and try to come up with a solution that’s going to be amenable to all parties,” said Richard Lambeck, chair of construction management department at NYU’s Schack Institute of Real Estate. “I don’t think a ban would be very effective and I don’t think the city or mayor is going to get exactly what they want.”

It’s widely accepted that glass buildings, unlike all-concrete structures, have poorer insulation qualities, requiring more heat to warm them in the winter and air to cool them in the summer.

Chris Cayten, a member of the BOMA-NY Sustainability Committee and principal of Code Green Solutions, said they are primarily a product of demand and not necessarily the emission beasts they are portrayed as.

“The companies that want to move into New York City all want these nice, shiny, glass office towers and the real estate industry is delivering what clients want,” said Cayten.

“There have been a lot of improvements in the efficiency of glass towers, although they will never be as well insulated as a masonry building with small windows. But it is harder to lease a masonry building with small windows so I would predict that forcing change may well drive up efficiency innovation although it is unlikely to wipe glass from the skyline.”

The only law that is part of the Green Deal is Intro. 1253 which requires all large buildings of 25,000 s/f or more, of which there are 50,000 citywide, to make efficiency upgrades that lower their energy usage and emissions or face steep penalties. The New Green Deal outlines lofty goals to attack global warming and cut greenhouse gas emmissions by 40 percent by 2030 that include everything from mandatory organics recycling to connecting NYC to clean Canadian hyrdopower.

The plan also seeks an end to purchases of single-use plastics, phasing out the use of processed meat, reducing beef purchases by 50 percent, and committing to a city fleet that has no carbon footprint by 2040.

“Every day we wait is a day our planet gets closer to the point of no-return,” de Blasio said. “New York City’s Green New Deal meets that reality head on, we are confronting the same interests that created the climate crisis and deepened inequality.”

The main goal of the Green New Deal is to get the city to full carbon neutrality by 2050, where the city has a net zero carbon footprint.

The real estate industry has already criticized the major parts of the plan, as many property owners would be forced to pursue costly improvements or face steep fines.

REBNY president John Banks said the industry supported the goal of reducing carbon emissions, but that the legislation missed the mark.

“The real estate industry and other stakeholders support the goal of reducing carbon emissions 40 percent by 2030,” Banks said. “Unfortunately, Intro 1253 does not take a comprehensive, city-wide approach needed to solve this complex issue.” REBNY projected that the carbon emission caps would come in at a cumulative cost to building owners of at least $4 billion and that the limits would make it difficult for buildings to accommodate growth.

Chris Cayten pointed out that carbon emissions limits are different for different types of buildings — schools, hospitals, storage facilities, office properties — and many will be able to tweak their output with something as simple of LED lights while others may have to carry out entire heating and cooling upgrades.

The city has created a structure of fines that start at $268 for every metric ton of carbon that a building is over its limit which could amount to millions od dollars per year for some large buildings, according to Cayten.

He also expects the city will need create its own new calculator tool so that each building’s emissions are being measured at the same rate. “The city has said it will measure carbon emission in a different way than the national standard so if they are going to deviate from the national calculations they will need to issue there own tool to allow a building owner to calculate it,” explained Cayten.

An option of allowing building owners to offset their emission overage by buying renewable energy also has some kinks in it.

Currently, electricity that feeds New York comes from Indian Point nuclear power plant and from natural gas-powered plants, so even if owners wanted to offset their bills by buying solar, wind or hydro power there isn’t a renewable power source close enough to the city.

The Green Deal could create a market for renewal energy generation much closer to New York City, said Cayten.

“This is going to be a lot of work for a lot of building owners,” said Cayten. “Ultimately, it will save them money by reducing their energy bills but it will require investment and it may be that the city will be able to identify some type of funding resources to help those building owners who may not have the capital to make these upgrades.”

“What the mayor is asking is certainly do-able and for those building owners who have been proactive over the last five to 10 years it may not mean much more than a new lightbulb, but for those who have lagged it will not be cheap.”

Jeff Perlman, the president and founder of energy and water consultant Bright Power, said building owners should be having discussions with their tenants about reducing energy consumption especially when no one is in the building.

“One of the most important things that every building owner needs to be thinking about whenever they’re spending money on their building is how those improvements will impact the energy efficiency,” Perlman said.

“There’s no sense in doing cosmetic renovations without thinking of all these other things, so you now have to factor in what are the things I’m going to do that’s going to reduce carbon emissions and avoid fines.”