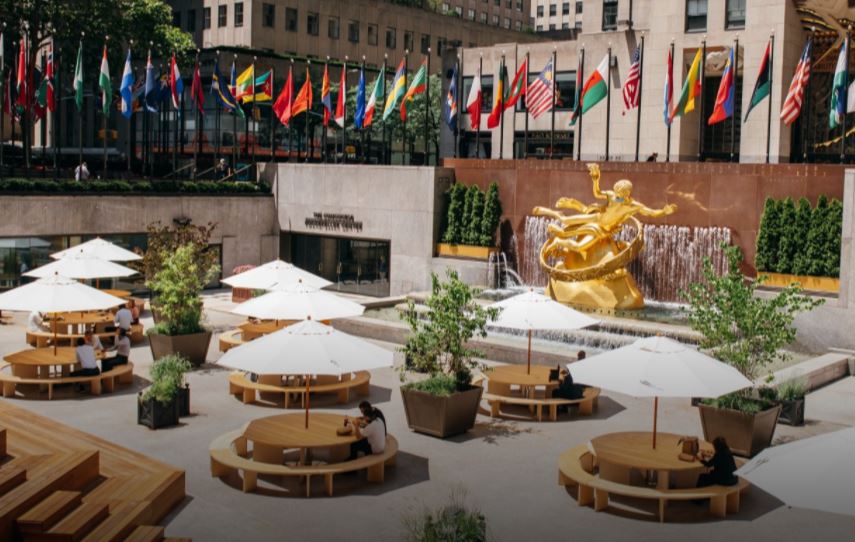 Tishman Speyer – which owns the building – announced this afternoon that the deal came after Mattos’ successful run with a pop-up concept in the Rockefeller Ice Rink over the summer months.

As part of its COVID recovery effort, Tishman Speyer has converted the famous rink into an outdoor restaurant with eateries including the famous Rainbow Room, Frenchette, Alidoro and Mattos’ estela’s sharing the space to serve visitors and locals alike.

“Partnering with Rockefeller Center at The Rink was a joy,” said Mattos. “The trust and support the Tishman Speyer team instilled in us during these unprecedented times is greatly appreciated; we could not be more excited to continue our partnership by creating a permanent space in one of the most beautiful and iconic landmarks in New York,” said Chef Ignacio Mattos.

His new 4,116 s/f restaurant at 1 Rockefeller Plaza will be called Caffè Lodi.  An Italian café, bar and bakery, it will open early 2021.

“Chef Ignacio Mattos is one of the most acclaimed and beloved chefs in New York, and we are elated to welcome him and Caffè Lodi to Rockefeller Center,” said EB Kelly, Tishman Speyer Managing Director overseeing Rockefeller Center.

“Ignacio is a New Yorker through and through.  Like so many of us, he comes from somewhere else, Uruguay, and like all of us, he is deeply committed to our city. The dining industry is what makes New York New York, it’s our lifeblood. One of our priorities is to work with a diverse roster of chefs and restauranteurs to create unmatched dining experiences that make Rockefeller Center New York’s premier dining destination.”

The Rockefeller Rink restaurant space is expected to continue to operate through the end of October.

Tishman Speyer just announced the French bistro Frenchette has extended its run at the space. Chef-owners Riad Nasr and Lee Hanson have signed on to keep their pop-up open through Oct. 30.

Chef Mattos was forced to shutter his Michelin-starred estela, Altro Paradiso and Flora Bar restaurants when the coronavirus brought New York to its knnes.