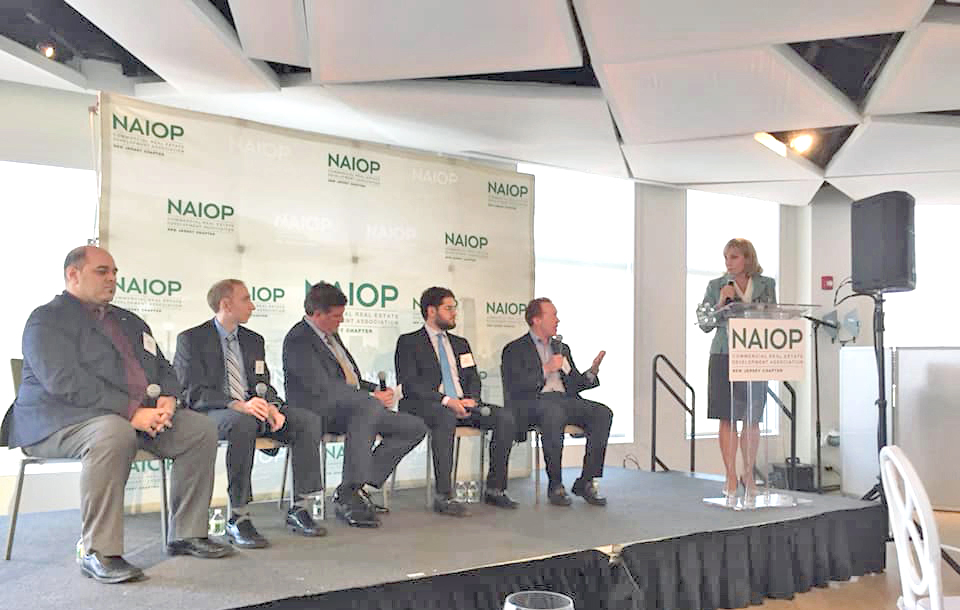 Industry leaders shared their perspectives on how businesses are seeking to align the work force with the work space during NAIOP New Jersey’s annual C-Suite Perspective.

The executives shared insights into the critical factors that influenced two key development projects and subsequent leasing deals: Cascades Containerboard Packaging’s lease at Turner Logistics Center in Piscataway, a 2018 NAIOP Industrial Deal of the Year finalist; and the Mars Wrigley Confectionery lease at Ironside Newark, which was awarded the 2019 Mixed Use Deal of the Year.

Edison Properties’ adaptive reuse of Ironside Newark has created a transformative workplace in the heart of the city’s revitalized downtown.

The 456,000 s/f, mixed-use commercial destination has already attracted multiple tenants, including a long-term, 148,500 s/f lease with Mars Wrigley Confectionery, in a transaction arranged by CBRE.

Sommer said that tenants today are looking for attributes that weren’t the focus of searches in the past.

“Most processes are HR versus C-Suite driven, and for tenants like Mars it’s all about attraction and retention of the labor force. The line between residential and commercial amenities is getting blurred, and businesses want to offer their employees things like rooftop amenities and easy access to food, beverage and entertainment.”

Edison Properties was bullish about developing the former warehouse on a speculative basis, given its location adjacent to Prudential Center and in close proximity to NJPAC, the Ironbound and Penn Station.

“This project has a definite coolness factor that will lend itself well to companies that want to feel like they are in New York when they’re in New Jersey. We recently moved our headquarters into the space and already there has been a cultural shift, with people having more interaction both inside and outside the office.”

“It’s one of the saving graces in the state, given some of the other challenges we have. Rutgers University’s real estate program is one of our main drivers and keeping these talented young professionals from leaving here is critical.”

When Greek Development purchased an obsolete R&D facility in Piscataway and redeveloped it into the 451,800 s/f Turner Logistics Center, the project created hundreds of jobs and revitalized the area.

“From an industrial sense, this big suburban campus was in the middle of nowhere,” said David Greek. “But we know access to labor is an imperative, and when we looked at the surrounding market and the proximity to Rutgers, we knew it was a great speculative opportunity for us.”

During the course of construction, the firm signed a long-term lease agreement with Cascades and built a state-of-the-art corrugated containerboard manufacturing facility and regional office headquarters.

“The Piscataway location was ideal, given that it’s near 75% of our customer base, and the educated labor force was a key factor,” said Fowlie.

Cote noted that the availability of the specific type of workforce the company was searching for was critical.

“We target not just people with industry or manufacturing experience, but those with a willingness to learn. We definitely looked closely at the local labor market with our site selection panel and have developed a good partnership with Rutgers that allows us to leverage their campus for recruitment.”

Cascades’ manufacturing facility operates 24/7/365, and the family-owned business focuses on providing a work-life balance for its diverse group of workers, the majority of whom are hourly employees.

Mathieu emphasized the importance of competitive wages, flex schedules and workplace amenities like an onsite gym to ensuring that people are happy and healthy. “Employees are choosing the employer now, not the other way around. It’s all about creating an inviting family environment and making them feel welcome.”

“In the past, we were lucky if industrial parks had landscaping. Today, aesthetics and amenities matter to tenants, and we are designing a better quality of life into our buildings.”

Guadagno invited comment from the panelists on the role state tax incentives play in facilitating these types of deals.

Babikian noted that incentives were key to the success of three corporate headquarters transactions in which his team was involved over the past 24 months.

“When these big deals happen in New Jersey, company CEOs or presidents often have a lot working against them. They need to sell the deals to their boards, and the state incentive is often what helps them win the argument.”

Greek’s firm negotiated a redevelopment area tax incentive for its future tenant through a Payment in Lieu of Taxes (PILOT) program with Piscataway Township.

“It was only the second PILOT they had done, and although it was a long process, the fact that the tenant has a lower tax rate and predictable taxes for next 30 years was a huge benefit.”

The redevelopment of Ironside Newark also involved a 30-year PILOT, which Sommer said “was an easy discussion with the city.” However, he added that the current debate over the future of New Jersey’s incentive programs “has caused the number of companies requesting incentives to diminish. Larger tenants simply aren’t pulling the trigger.”

Greek agreed. “The uncertainty around incentive programs is deadly right now. We’ve seen clients disappear in industrial space. If they were relying on tax credits at the start, they are no longer there.”