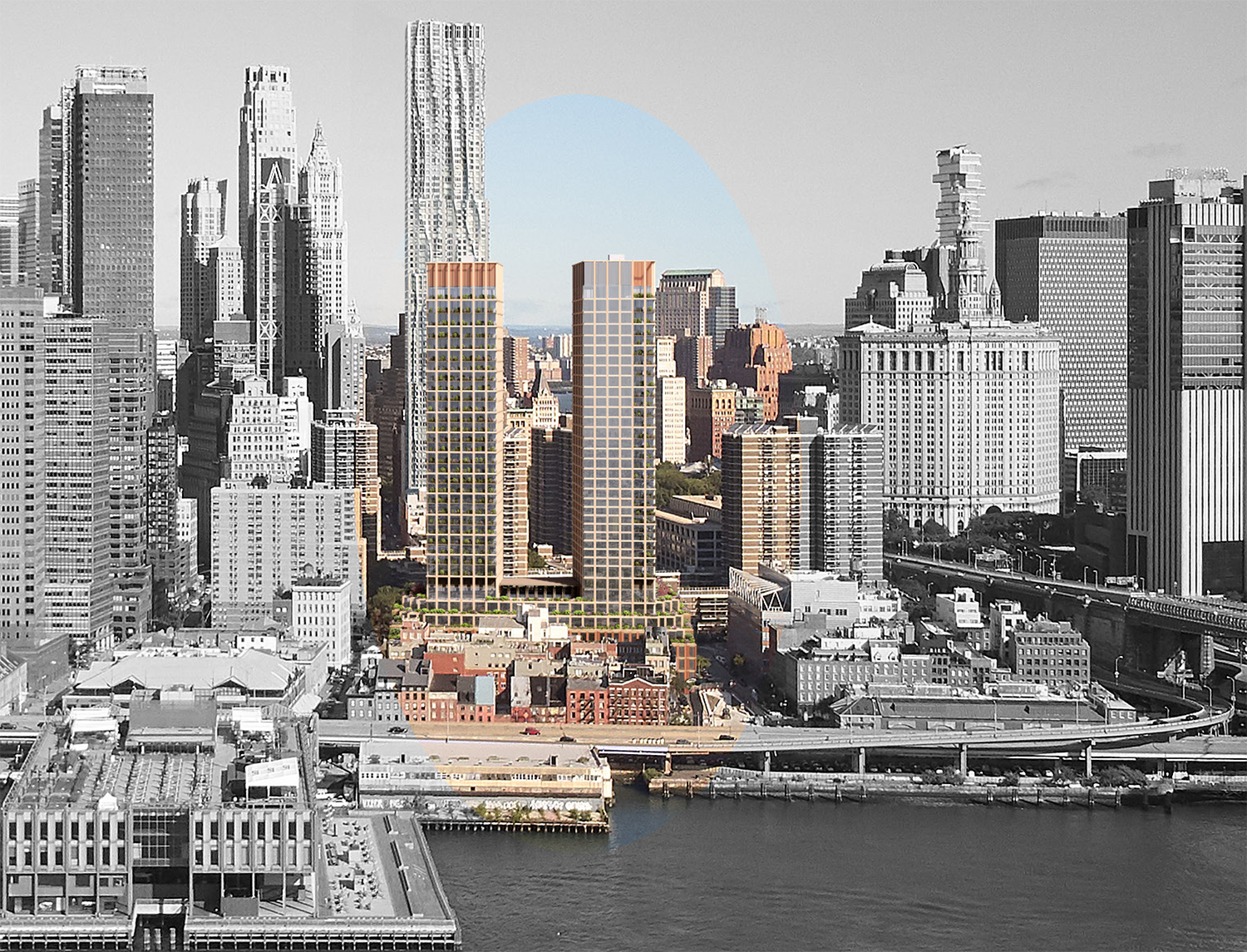 The Howard Hughes Corp. (HHC) has unveiled its plan to redevelop an old glue factory site in the South Street Seaport as a 470 ft. twin tower apartment complex.

The developer said the $1.4 billion development at 250 Water Street will include 100 affordable apartments and renovations to the Seaport Museum that will help keep it “financially secure” for decades to come.

“As New York City works to recover from the devastating impacts of the pandemic, we are redoubling our commitment to the city and the Seaport. We aim to be part of the solution by investing in this unique, historic neighborhood and its economy, providing a crucial lifeline to the Seaport Museum, and building affordable housing in an area where housing prices are out of reach for most New Yorkers,” said Saul Scherl, president of the New York Tri-State Region, The Howard Hughes Corporation.

“Over the last five years, we’ve received input from a wide range of neighbors about the Seaport’s future that has helped shape our proposal, which honors the area’s history and culture. We’re eager to continue the constructive dialogue with the community and our local elected officials as we move toward public review.”

Howard Hughes has been pushing to develop the site since buying it from the Milstein family for $182 million in 2018.

Now a tarmac parking lot, the site was once a glue factory, chemical plant and mercury warehouse, and the land was contaminated with a slew of toxic pollutants.

The Milstein family faced several challenges in its attempts to develop the site, including community opposition, downzoning and litigation.

Howard Hughes has been similarly hamstrung. However, it has been working with the New York State Department of Environmental Conservation and Department of Health on a Brownfield Cleanup Program, even funding an independent community monitor to ensure the safe environmental remediation of the 250 Water Street parking lot.

Now it wants to move the plan forward with what it calls “a comprehensive public review.” Howard Hughes said it will present the plan to the Landmarks Preservation Commission in December before beginning the city’s Uniform Land Use Review Procedure (ULURP) in the spring of 2021.

Under that timeline, if it gets approved, construction could start in 2022.

250 Water Street is a full block site located on the edge of the Seaport Historic District. Vacant and used as a surface parking lot for decades, it has no historic significance.

HHC’s plan was designed by Skidmore, Owings & Merrill (SOM). After multiple dry runs – which included a single 1,000 ft. skyscraper – the architects have crafted a twin tower development on a scaled podium base.

The highest point of the development is 470 ft. and the base is “articulated” to allow light down to surrounding streets, and it will have storefronts compatible with those found in the district.

The 250 Water proposal also includes enhancements to the Peck Slip Play Street used by the neighboring Peck Slip School and Seaport families, as well as community-oriented spaces and office space.

But the centerpiece of the proposal, said HHC, is inclusion of the first affordable housing built in Manhattan Community Board 1 through the City’s Mandatory Inclusionary Housing program.

The development will have 360 apartments – 260 market rate condos and 100 MIH affordable rental apartments that will be made available to families earning 40 percent of Area Median Income.

Its most “significant and visible holdings” include its 19th-century home on Schermerhorn Row, a working letterpress printing shop, and its fleet of historic ships.

Over the past two decades, the museum has survived significant setbacks, including a two-year closure after 9/11, the 2008 financial collapse, crippling flooding during Hurricane Sandy, and now an existential threat resulting from the COVID pandemic.

According to HHC, for many years, the Museum has cared for its properties at the expense of its long-term financial health and, without reliable funding, faces a potential for permanent closure.

As part of its proposal, HHC will give the Museum $50 million to advance a first phase of restoration and rehabilitation that will enable the Museum to reopen and start the process of planning a new state-of-the-art museum building on an adjacent vacant lot.

Jonathan Boulware, president of the South Street Seaport Museum, said the money will help it thrive. “For decades the Seaport Museum has credibly delivered its world-renowned and award-winning program despite a perennial shortage of reliable revenues,” said Boulware.

“Following the repeated setbacks the Museum has endured, the pandemic is a terrible blow. The proposed financial support from this project and phased improvements to its Schermerhorn Row home would go a very long way to ensuring that this irreplaceable jewel in New York’s crown survives and thrives.”

Before the project can go ahead, it requires a number of government approvals.

The New York City Landmarks Preservation Commission (LPC) must approve the designs of the 250 Water Street Building and the new Museum Building as well as the improvements to the Museum’s historic buildings.

The entire plan hinges on the transfer of unused development rights from the HHC-leased Pier 17 and Tin Building sites to 250 Water Street.

Mary Ann Tighe, a member of HHC’s board of director and Chief Executive Officer of the New York Tri-State Region for CBRE, has called the project “visionary.”

She said, “The Howard Hughes Corporation remains firmly committed to the Seaport and New York City for the long-term, with mixed-income housing and a plan to save the Seaport Museum at the heart of our commitment.

“We believe visionary projects like this will help propel the city’s economic recovery.”

Catherine McVay Hughes, South Street Seaport Museum Board member and former Chair of Manhattan Community Board 1, said the plan represents the first pandemic-recovery investment downtown and it is “reminiscent of early investment following 9/11.”

In 2015, the Seaport area lost 1,650 formerly income-restricted apartments from the Mitchell-Lama program when the nearby Southbridge Towers was converted to a co-op.

As of today, the 250 Water Street site has been approved for the Brownfield Cleanup Program (BCP), one of New York’s primary tools to ensure the effective cleanup and reuse of urban brownfields. The primary contaminant of concern is mercury, which is related to the former use of the site as a thermometer factory.

However, HHC has not yet submitted a formal remediation plan for the site, which is still in the investigation phase.

Remedial Investigation field work began June 15, 2020 and environmental sampling data is currently under review by DEC and the Department of Health. That review, which should determine exactly what contaminants may be in the ground and how they can be safely neutralized, is expected to be complete in early 2021.

After that, HHC will be required to design a formal cleanup plan, subject to public review and comment, that ensures the site is contaminant free and appropriate for the intended future use of the site.