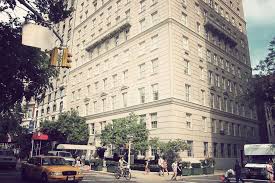 How the other half of the one percent live

An opulent maisonette in one of the most exclusive co-ops in New York City has been listed on StreetEasy.

Considered one of the handful of Manhattan buildings recognized by its street number alone, 820 Fifth Avenue is so exclusive the board has turned away everyone from billionaire oil heir Fred Koch to Related boss Jeff Blau .

Brown Harris Stevens clammed up when we asked for the deets on the 13-room maisonette just listed for $20 million.

Thereʼs a main entrance that opens into a gallery where a winding staircase leads to the “private quarters” upstairs.

The public rooms include a living room, paneled library, gas fireplaces with mantels and windows with direct Central Park views. There is a formal dining room, kitchen, breakfast room and pantry and a handy back staircase to the laundry room, service elevator and staff room.

The second floor has the elevator landing, another library with a wet bar and three bedrooms. The master is en suite with a dressing room and direct park views.

The maisonette is the second home in the storied building to take to the public listings since the death of dowager Jayne Wrightsman last April.

The 99-year-old widow of Oklahoma oil man Charles Wrightsman and well-known patron of the arts was widely reported to be the unofficial president of a board which considers cash payments to be a minimal requirement.

Her own 18-room third floor home was listed in November for $50 million with Brown Harris Stevens’ John Burger.

It is believed the maisonette listed with Jill Roosevelt at BHS for $20 million is being sold by Norma Lerner, the widow of credit card pioneer Al Lerner.
Take a look at the official listing.