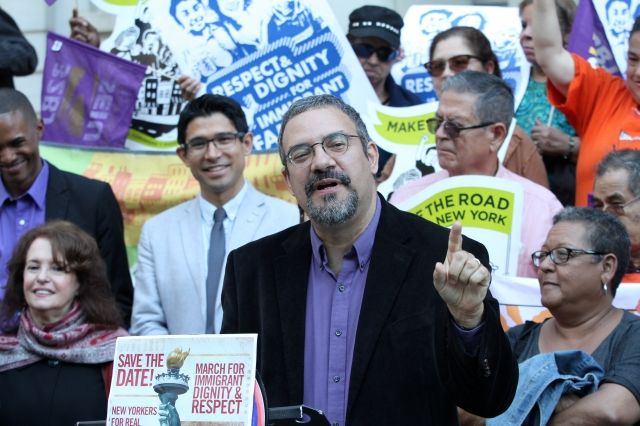 Albert Einstein once said that “a life lived for others is a life worth living.” Last Thursday, Hector Figueroa, the President of 32BJ SEIU, passed away suddenly having lived the worthiest of lives.

During his tenure at 32BJ SEIU, Hector was more than a labor leader. Héctor was a forceful champion of immigrant and workers’ rights. He spoke clearly and passionately against economic, social, and racial injustice.

Héctor Figueroa lived his life, and got results, for the thousands of people who handle baggage, push wheelchairs and do other vital work in our airports. Under his leadership, they won better wages and benefits.

He was a leader in the fight to increase the minimum wage to $15 per hour. In the process, he helped change the lives and financial standing of hundreds of thousands of families.

His life is in many ways was a testament to the spirit of New York City and the American Dream. Born and raised in Puerto Rico, Héctor moved to the Bronx in 1982 when he was just 20-years-old. He worked his way through college and first became involved with SEIU in the mid-1990s, believing that every building service worker deserved protection and a voice.

Héctor lived to advocate for his members. If you’ve ever lived or worked in a building staffed by 32BJ SEIU members, you’re aware that they are the first called upon to go above and beyond when people need help addressing problems large and small. 32BJ workers are often the first responders when the elevator, the lights, or the air-conditioning goes out.

They are relied upon when keys are lost, or a package is delivered. Héctor loved to talk about the positive impact made by the daily good deeds and sacrifices of New York’s doormen, porters, and security officers.

In 2012 Héctor was elected president of the 32BJ SEIU, which is the largest property service labor organization in the United States. While Hector was a champion of immigrant and workers’ rights, he was also a great labor leader.

He led more than 160,000 members based in states along the eastern seaboard. The union grew by more than 50,000 members under his leadership and played a key role in shaping some of the most important legislative outcomes in those states.

Being a great labor leader meant that he and the real estate industry did not always see eye-to-eye on issues. He and his very talented staff were formidable negotiators at the bargaining table.

In the quarterly meetings held between staff members of our organizations at which we discussed policy issues of mutual interest and concern, such discussions were often robust and candid.

Héctor was a champion for strengthening and diversifying New York’s economy. When Amazon announced plans to build a second headquarters in Long Island City, he was a vocal supporter of the move to bring more than 25,000 jobs, about 40% of which would not require a college degree.

After Amazon reversed course, Hector pointed out to critics of the deal that a great opportunity had been squandered for the labor movement to organize an employer that lacked a unionized workforce.

Throughout it all, Héctor was driven by a principled and earnest belief in his cause and a deep commitment to make New York City a better place. He was a fierce and tireless fighter for what he believed was best for his membership. He also understood the nuances of building consensus to get things done.

He displayed that desire for consensus last month when he and the union urged moderation with respect to changes to the laws governing the City’s rent regulation system.

He believed strongly that changes were needed to the rent regulation laws but urged caution as to what those changes were so that the end result was not a loss of jobs and less housing units available to those in need.

Héctor was respected by all of us fortunate enough to have worked with him. We should remember his never-ending energy for what he believed was right.

A life like Héctor’s, lived in service of others should be celebrated, for his was a life from which every single New Yorker can draw inspiration.