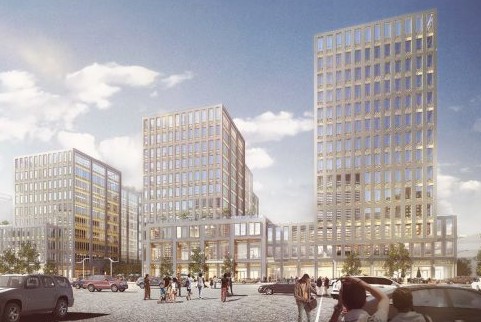 Flush with new development, builders are bankrolling a new Jamaica

Three years after the City of New York released an action plan in an effort to spur economic development and growth in Jamaica, Queens, the neighborhood’s downtown is buzzing with activity, as developers have snapped up development sites and retail has flourished.

Major investment in the area of Jamaica began in 2003, when the City put $1.9 billion into the construction of the AirTrain to JFK Airport, and rezoning 368 blocks of the downtown core in 2007.

Despite this, high unemployment, inadequate infrastructure, and limited supportive programs all contributed to a decline in job growth and real estate activity over the last decade, according to the Jamaica Now Action Plan, released in 2015.

Meredith Marshall first became active in Jamaica with his firm, BRP Companies, in 2014, when they purchased a development site for $225 million. It became the site for the project The Crossing at Jamaica Station, which is under construction and will continue to rise over the next two years.

Located at the corner of Archer Avenue and Sutphin Avenue, the project will have a total of 669 mixed-income residential units, 45,000 s/f of community and retail space, and approximately 200 parking spaces. In total, The Crossing will have 773,000 s/f of mixed-use space. The project is planned to be completed at the end of 2019, with a price tag of $400 million.

Though other development firms have taken notice of Jamaica’s plentiful transit options—the E, J, and Z trains as well as Long Island Rail Road have stops in downtown Jamaica—Marshall called The Crossing at Jamaica Station the “largest single private development in Jamaica in a long time.”

“We see billions being invested in downtown Jamaica,” said Marshall. “We were the first company to get in there in a big way.”

The BRP Companies have two other planned developments in Jamaica as well. Archer Towers is an 800-unit project that will have some retail and office space, and is expected to cost between $400 and $500 million.

“We’re bullish on the area,” said Marshall. “Downtown Jamaica before was not a major destination for housing and new development, but you see that market changing. It’s becoming a destination for workforce housing.”

In 2012, the Dermot Co. built the Moda apartments, an 8-story, 346-unit luxury rental building on 89th Avenue, Phoenix Realty Group along with Artimus Construction are developing a 24-story tower to replace a warehouse on 94th Avenue in Jamaica, with 522 apartments planned, and several new hotels are in the works for downtown Jamaica.

According to data from the Greater Jamaica Development Corporation, with all the commercial and residential projects underway, the area is expecting 3,000 housing units, 500,000 s/f of retail space, and 800 hotel rooms over the next five years.

Citi Habitats agent Ronnie Shumake, who grew up Queens, recalled the opening ceremony for the Jamaica Center train expansion when it opened in the early 90’s. Mayor Dinkins was at the event, and Shumake played in his junior high band at the ceremony.

“Even at that time, and I’ve been in real estate a long time, even then I knew it was a huge occasion,” said Shumake. He knew that it would take a few decades, but that major transit hub would be a game changer for the area.

The empty parking lot that sat next to the new transit hub when it first opened would eventually become a movie theater that takes up on square block, and a huge mixed-use retail space that houses several national retail brands.

Shumake compared the change in downtown Jamaica to the Hudson Yards area and Battery Park several decades ago.

“There’s been a huge increase in the interest in eastern Queens in the last two years,” said Shumake. And on the rental side, apartment hunters can still find steals at under $1,500 for a one bedroom. “That’s almost unheard of in Manhattan, Brooklyn, and even the Bronx.”

The Jamaica area is one that Shumake sees as more of a middle income range neighborhood, where city employees priced out of Manhattan and Brooklyn can find reasonable prices, as well as neighborhood amenities similar to typical “city life.”

As a native New Yorker and a veteran real estate agent, Shumake has what he calls and “encyclopedic” knowledge of the neighborhoods of NYC. But he has found in the past decade he always has to introduce Jamaica to clients. In the end though, if the apartment was great and close enough to a major transit station, people were open to giving the area a shot.

“The infrastructure is such in that area, that if you build it they will come,” said Shumake. “It’s really happening now, that neighborhood is reaching critical mass.”

Have You Heard? ‘I, Tonya’ composer snags Brooklyn pad