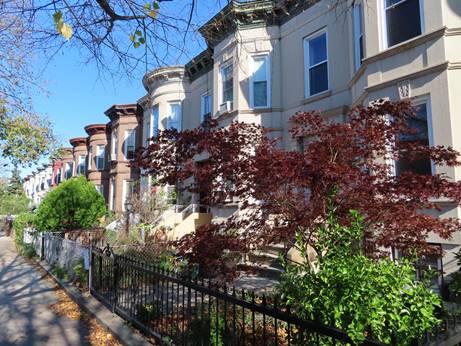 Flatbush gets its first historic district

The block is the first historic district in East Flatbush

“Through this designation, the Commission is recognizing both the architectural quality and the residents’ incredible stewardship of their historic homes and their block,” said Landmarks Preservation Commission Chair Sarah Carroll.

“I have been so impressed by how the historic architecture drew people to this block and how their community spirit has grown stronger through their collective efforts to green, beautify and preserve it. This designation exemplifies the intersection of historic preservation and community, which is very rewarding.”

According to the PLPC, the District owes its “exceptional cohesiveness and strong sense of place” to three major factors: its construction within a very short time frame by a single developer,  its architectural consistency, and its excellent historic integrity.

All of the houses were built by a single developer, the Henry Meyer Building Company, between 1909 and 1912 and designed by the Williamsburg firm of Glucroft & Glucroft in the Renaissance Revival style.

Each house is of one of four types, with either a limestone or brownstone front and rounded or angled bay. All of their main facades remain essentially intact. The high degree of integrity and long, unbroken rows of the historic district are especially distinctive for this area of Flatbush, with its typically more varied streetscapes.

During their early years, these houses were owned and occupied by the families of white merchants and other upper-middle-class professionals. Notable early residents of the district included suffragist Nellie Marshall, and the influential executive director of the Port Authority Austin Tobin.

In recent years, the houses’ ownership has come to reflect Flatbush’s increasing diversity, especially the growth of its African American and Afro-Caribbean communities which grew significantly in the 1970s and 1980s.

Council Member Farah N. Louis said,  “I am proud to join my neighbors and constituents in celebrating the first-ever historic district in East Flatbush. The predominantly Black and Caribbean homeowners can now rest assured that their properties are beyond the reach of developers.”

Mayor Bill de Blasio along with Councilmember Mathieu Eugene, recently announced plans to develop 130 affordable homes at 2274-2286 Church Avenue in Flatbush, which was once the historic Flatbush District No. 1 School and a slave grave site before that.

The school was demolished in 2015 because of hazardous structural conditions. The city is launching a ‘request for proposals’ (RFP) to develop housing units and space dedicated to educational and vocational training programs on the 29,000 s/f site.

The Department of Housing Preservation and Development (HPD) will release the ‘request for qualifications’ (RFQ) later this year, followed by a RFP later next year that will include a plan to identify the descendent communities of the colonial enslaved and freed Africans of early Flatbush and  to establish a memorial for the historic site and the significant role of African Americans in the creation of the neighborhood.

Jadian looking for next big thing with $650M fund