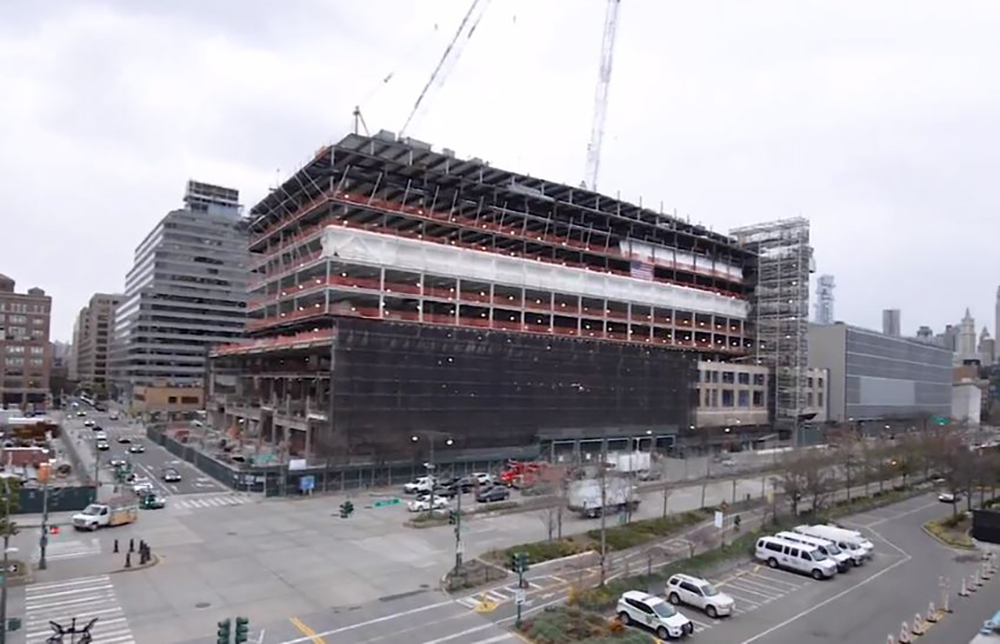 Oxford Properties Group, joined by Turner Construction, Google and COOKFOX Architects, today raised the final steel beam of the St. John’s Terminal development and raised thanks to the 500 person construction team that has seen the building top off on schedule despite the pandemic.

“Today we raise thanks to the hundreds of construction workers who have worked tirelessly to achieve this milestone for St. John’s Terminal,” said Dean Shapiro, Head of US Developments at Oxford Properties.

“The fact we have topped out on schedule during a pandemic is testament to the determination and grit of these workers, the development team and speaks to the resilience of New York as a whole. I want to thank the Turner Construction team for swiftly implementing protocols to keep workers safe. It’s up to all of us to rebuild New York for the future, and Oxford is proud to be developing St. John’s Terminal as we continue to drive innovation and creativity for the New York economy.”

“Today’s announcement reflects the tireless commitment of the incredible New York construction workers who worked day after day to ensure this impressive project came to life despite the unprecedented challenges posed by the COVID pandemic,” Governor Andrew Cuomo said. “We commend Oxford Properties for successfully reaching this important milestone for St. John’s Terminal Development and celebrate Google’s decision to expand its footprint and operations in New York, further proof that the Empire State will always be a global hub for talent and innovation.”

“As New York City comes back, it’ll be tech that leads the way,” said Mayor Bill de Blasio. “Google has doubled down on their big bet on New York City because they know we have advantages that are unmatched across the country and across the globe. Together, we’re going to build on that strong foundation and that work starts today.”

Located at 550 Washington Street at the corner of Houston and West Streets in Hudson Square, the building encompasses two entire city blocks in Manhattan – adjacent to Hudson River Park’s Pier 40 and at the intersection of the West Village, SoHo and Tribeca.

Oxford acquired the site in September 2017 as its first project as lead developer in the US.

To date, the project has created more than 500 construction jobs that have worked over 775,000 hours to date. The project will enhance the Hudson Square neighborhood’s public infrastructure connectivity through removal of the West Houston Street overpass and installation of a new crosswalk over the West Side Highway. It will also add an abundance of new and native landscaping of open space and connect the neighborhood with nearby park and open space.

“This project deepens our commitment to growing and investing in New York City as our home for many years to come,” said William Floyd, Director of Public Affairs for Google NYC. “As a key part of our future Google Hudson Square campus, St. John’s Terminal will help support our ability to more than double the number of Google employees in New York over the next several years.”

The plan incorporates three stories of the existing structure and showcases the original railbeds as a central design feature. The building’s façade will allow for more than 500 linear feet of unobstructed west-facing water views, providing breathtaking views of the widest sunset in New York City. The building’s biophilic design will produce numerous outdoor retreats for building tenants, including a greenscaped rooftop and terraces overlooking the river. The base building is expected to be completed in 2022.

“Today is a celebration of the efforts of so many that had a vision for St. John’s Terminal. We want to thank Oxford for their foresight and courage in developing this site, Google for their commitment to expand their presence in the New York market, and both for allowing Turner to be their partner,” said Bert Rahm, Vice President and General Manager of Turner Construction.

“Lastly, a huge thanks to the Turner staff and workforce. Not enough can be said about how hard and diligently everyone worked to get back on schedule following Covid. When complete many will look to St. John’s Terminal as an example that no matter how difficult a situation, or what may happen in the world, when a team communicates and collaborates nothing is impossible.”

“We are thankful for the amazing and diverse team that has undertaken an incredibly rare opportunity to transform a two-block long waterfront site in New York and for our partners in Oxford and then in Google who are completely unified in our belief that architecture can be transformative, regenerative and restorative of our connection to history and to nature, for those who will occupy the building and for the entire city,” said Rick Cook, Founding Partner of COOKFOX Architects.

Based on the building’s original features, Oxford and COOKFOX are creating a purpose-built campus environment on the West Side that will drive workforce innovation and collaboration. The building will feature 100,000-square-foot floorplates that are exceptionally rare in the Manhattan marketplace, and an industry-leading amenities package.