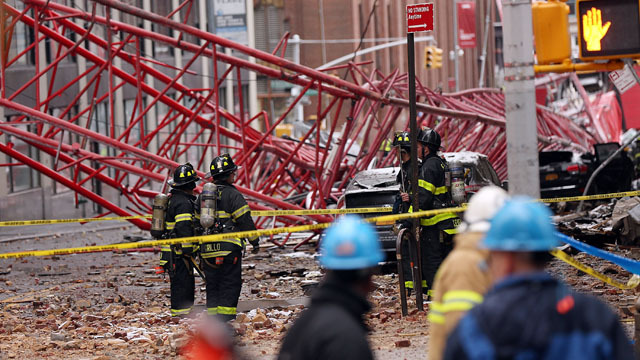 The accident happened the morning of Feb. 5, when construction workers at 60 Hudson Street, the former Western Union building, were attempting to secure a crawler crane during windy and snowy conditions. While in the process of securing it, the crane buckled, sending it crashing down onto Worth Street, crushing at least one car and leaving a trail of debris in its wake.

A 38-year-old man, David Wichs, was killed while sitting in his car on his way to work. Three others were injured by falling debris. De Blasio said the situation could have been “even worse,” had the construction workers lowering the crane not directed traffic and people away from the street before it fell.

“This is the first crane collapse in the city since 2008,” said de Blasio at a press conference after the accident.  “A number of precautions were put in place at that time that have been very effective in stopping this kind of problem. And in fact, those type of precautions were in place today, which is why this crane was being lowered into a secured position, but something went wrong in that process. There’s going to be a full investigation to find out what went wrong.”

Two days after the collapse, Mayor de Blasio announced a four-point plan to increase safety when large cranes are operating. Those steps include new restrictions on crawler cranes during wind conditions, doubled fines for failure to safeguard equipment, increased enforcement of pedestrian safety alongside crane sites and more notification of crane activities to adjacent buildings.

The rules dictate that crawler cranes must cease operations and secure equipment when winds are forecast to hit 20mph, and must certify that equipment is in safety mode, and fines will be doubled to $10,000 for failure to safeguard equipment.

In 2008, a nearly 200-foot tall tower crane fell in East Midtown at the site of the Halycon condo building on E. 51st Street, killing six construction workers and a tourist. There have been six other crane-related accidents since then, totaling four deaths.

“While the city needs to continue to grow, it must do so in a way in which the safety of workers and the public is paramount. We are committed to working with Mayor de Blasio and Department of Buildings Commissioner Chandler to ensure that that the highest safety measures are in place at work sites throughout the city,” said John Banks, president of The Real Estate Board of New York, in a prepared statement.

Construction safety has been a hot topic in NYC in the past year.

In December, thousands of construction workers and advocates rallied in front of city hall to demand better safety measures on construction sites across New York City.

Between October 2014 and September 2015, eighteen workers died at job sites in New York City, according to the U.S. Occupational Safety & Health Administration. The number was up from 12 during the previous 12 months, and seven the year before that.

“We grieve for the victim of the crane collapse and send our condolences to his family,” said Gary LaBarbera, president of the Building and Construction Trades Council of Greater New York, in an e-mailed statement. “While this incident proved tragic, it is important to note the Department of Buildings on Thursday inspected the site where by all measures, appropriate safety measures were in place and proper procedures followed. We hope further investigation will tell us what caused this accident.”

Last Friday, Mayor de Blasio ordered that all 376 of the city’s crawler cranes be inspected before being put back into service. Meanwhile, the Department of Buildings is still investigating the incident to determine what went wrong, including a forensic investigation of the equipment itself.

“No building is worth a person’s life. We are going to ensure the record boom in construction and growth does not come at the expense of safety,” said de Blasio.

Controversial Sutton Place project may be out of reach of opponents