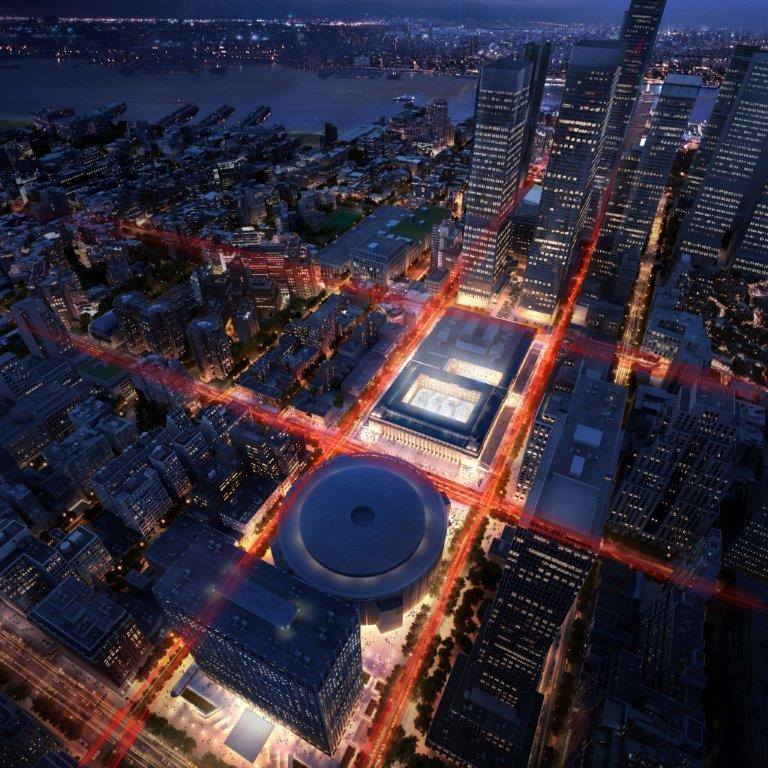 The plan to transform Penn Station and its neighborhood with a new station and 20 million square feet o few office, hotel and apartment space took a step forward today,

Governor Andrew Cuomo announced that Empire State Development’s Board of Directors has adopted the General Project Plan and certified the draft Environmental Impact Statement for the Empire Station Complex.

Working with Vornado Realty Trust – which owns much of the land in the development site –  to state plans to develop about 20 million square feet of class A commercial office, retail and hotel space across eight sites

Revenue from the new development will finance improvements to the existing Penn Station with new entrances and access ways, public space improvements and enhancements of the surrounding streetscape.

The project, dubbed the Empire Station Complex, was first announced by Gov. Cuomo in his 2020 State of the State agenda and includes the new Moynihan Train Hall, which opened in January.

“The Moynihan Train Hall’s successful completion was a milestone, but it’s only the first step in a neighborhood-wide revitalization,” said Cuomo. “The Empire Station Complex project represents the next great investment in our efforts to rebuild and expand this crucial piece of our state’s infrastructure and will support economic growth in New York City and across the entire state.”

The buildings facilitated by the adopted plan will generate essential revenue for substantial improvements at Penn Station and other transit facilities in the project area.

Three of the eight proposed sites would accommodate the potential expansion of Penn Station into the blocks south of the existing station to allow for the creation of new, below-grade tracks and platforms. The adopted plan for these sites would require that the above-grade mixed-use development accommodate the potential expansion under the sites and adjoining streets.

The design, construction, and operation of an expanded Penn Station, which is being analyzed as part of a separate planning and federal environmental review process, would be assumed by the Metropolitan Transit Authority, Amtrak, and the New Jersey Transit Authority.

The project area is generally bounded by Sixth and Ninth Avenues to the east and west, and by West 30th and West 34th Streets to the south and north in Midtown Manhattan, Community Districts 4 and 5.

Empire State Development Chairman Steven M. Cohen said, “ESD has made significant strides in fulfilling Governor Cuomo’s promise to finally build the modern transportation rail hub that New York truly deserves, not merely settles for. The ESD board recognizes that New York’s future economic vitality directly depends on the infrastructure improvements we make today, and I appreciate their vote of confidence on this project and for the Governor’s broader vision to move this state forward.”

Empire State Development Acting Commissioner and President & CEO-designate Eric Gertler said, “With Moynihan Train Hall and now this General Project Plan, we are well on the way toward transforming Penn Station into another iconic symbol of New York City’s future. “

A virtual public hearing on the DEIS and GPP will take place on Tuesday, March 23, 2021,  followed by a 30-day public comment period.

Other elements of Governor Cuomo’s vision for Midtown West are extending the High Line, replacing the Port Authority Bus Terminal, transforming Pier 76 from a tow pound to a waterfront park, and the soon to be completed expansion of the Javits Center.

Rep. Carolyn Maloney said, “Moving forward with a modern and revitalized Empire Station Complex is an important step toward the infrastructure investments needed to ensure regional interconnectivity and economic growth. Penn Station is the gateway to New York City for millions of tourists and commuters and should reflect the greatness of our city.”