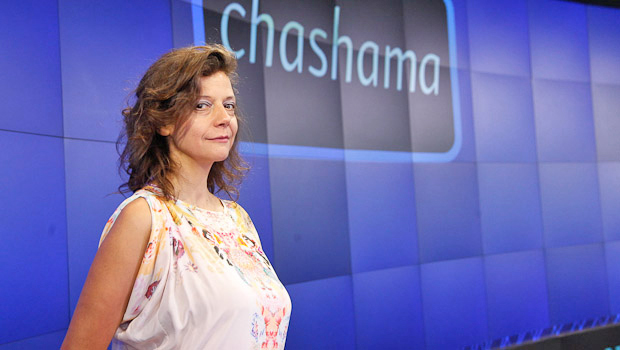 At 103 years old, the Durst Organization owns 16 million s/f of space between 18 buildings in Manhattan, making it one of the city’s oldest and most prominent real estate companies.

However, Anita Durst never had much interest in the family business and she was never pressured to. Her passion and profession lie in the arts — but the real estate world won’t leave her alone. She is bombarded with calls, emails and text messages from people offering her space in the city — rent free.

“Last week I got emailed for eight different spaces,” Durst said over chai latte. “1220 Third Avenue was one of them, another was the Ricky’s on 14th Street, I don’t remember the addresses of the other ones, but those are the two that stood out because they’re huge spaces, like, 7,000 s/f.”

It’s not that she doesn’t want these spaces, it’s than she already has too many.

Durst created the non-profit organization chashama in 1995 with the goal of securing space for her fellow creatives to hone their skills and display their work on the streets of New York.

This was before gentrification turned artist lofts to art galleries in Chelsea, before apartment buildings required curators to decorate their lobbies and well before the term “experiential retail” entered the real estate lexicon.
For Durst and her team, the goal has remained the same, but the landscape around them has shifted.

While interest has always been high among artists — the current waiting list numbers more than 1,000 — building owners and landlords are increasingly eager to participate in the program as the retail vacancy rate continues to creep up throughout the city.

“This is an artists’ moment right now,” Cindy Scholz, chair of chashama’s board of directors, said. “It’s going to take a little bit of time for landlords who want to adjust to this new retail market, so we have a real opportunity during these next couple years to make our mark and expand our presence in the city.”

chashama has 23 locations throughout the tristate, ranging between 300 s/f and 60,000 s/f. Some serve as free studios for painters and sculptors, others are exhibition spaces for performers and interactive installments — one of which allows visitors to marry themselves.

The organization has also introduced a handful of artist-led classes at inside community spaces in Washington Heights and the Bronx.

Although she finds herself turning properties down, more often than not, Durst hopes to change that in the near future by seeking out new spaces throughout the city. But for the long-time actress who makes a point of attending as many chashama shows as possible, this means moving her attention away from specific programs, outsourcing that job so she can focus on the bigger picture.

“We’re stilling going to work with individual artists, but we’re also going to work with more cultural institutions in New York,” she said. “One of the things most cultural institutions and people in New York need is space, so we’re going to go from programming, presenting, to being more of a real estate company, really focusing on getting as many spaces out there as possible.”

Scholz said the organization has a two-pronged strategy for expansion. It has already partnered with other groups, such as Think Chinatown, an organization that advocates New York’s various Asian-American communities, to handle event scheduling. In this case, Think Chinatown is overseeing the shows at Chashama’s 384 Broadway location.
The second portion is to leverage new technology to increase efficiently.

“We pretty much want a Tinder for what we do, for matching artists with spaces, where people can swipe through and get matched up with what theyʼre looking for,” Scholz said. “Once we get this organized, it could be a fantastic tool for brokers to use as well, if they have spaces that their clients want filled with art.”

Durst said she’s taken to the shift well, drawing from her experience watching her father, Douglas Durst, at work when she was a child.

“Real estate must run in my blood,” she said. “I’ve seen my family over the years buy the buildings and be in meetings, it’s something I grew up with. I see it as an extension to what my family does.”

Before formally channeling her location-finding abilities into a non-profit, Durst got her start as a location scout for her friend and theatrical mentor, Reza Abdoh, a Iranian-American playwright and director who was famous for staging elaborate productions in old warehouses and even on city streets.

Durst, who has made appeared in Hollywood films such as Analyze That and Saving Manhattan, learned her love for performance while touring Europe with Abdoh and company. After he died of complications from AIDS in 1995, she resolved to do what she could to give other artists the chance to grow and be inspired.

IN PICTURES: City of Tomorrow conference at 92Y

Massey still in the game as solid year is forecast