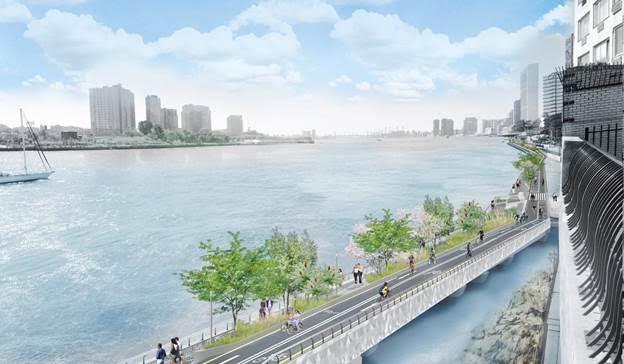 Mayor Bill de Blasio announced that he will dedicate $100 million of tomorrow’s budget to close the largest gap in the Manhattan Waterfront Greenway.

In a push to complete the vision of a contiguous 32-mile waterfront pedestrian promenade and bicycling path around Manhattan, the Economic Development Corporation will construct a new esplanade between East 61st Street and East 53rd Street.

Design will begin this year and construction will start in 2019, with completion expected in 2022.

The project has received initial approval from the US Coast Guard, Army Corps of Engineers, and State Department of Environmental Conservation.

Since its inception in 1993 under Mayor David Dinkins, each Administration has contributed to Manhattan Waterfront Greenway. The last major section to open was a 10-block pile-supported riverwalk in Riverside Park, completing a contiguous 11-mile stretch from the Battery to the George Washington Bridge. With more than 7,000 daily cyclists, it is the busiest bike path in the United States.

Once complete, the addition announced yesterday will remove one of the last remaining interruptions to the 32-mile Greenway around Manhattan Island.