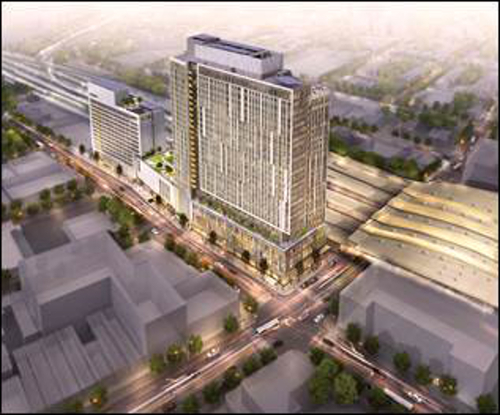 A nearly 700-unit affordable housing complex in Jamaica will help local families get ahead, according to Deputy Mayor for Housing and Economic Development Alicia Glen.

“The Crossing at Jamaica Station will be a true-mixed income project that strengthens the whole neighborhood,” said Glen during a ground breaking ceremony yesterday (Tuesday).

“For nearly 700 families, this will mean real security and the ability to have a little left over every month to get ahead. And this is just one of many dynamic changes afoot in Jamaica that will anchor its families, support local businesses and build community for generations to come.”

BRP Companies is developing the 669-unit affordable housing complex. The property will be composed of two towers: a 15-story building with 130 units and a 30-story tower with 539 units. The planned complex, which is located at the corner of Sutphin Boulevard and Archer Avenue, is expected to anchor Downtown Jamaica’s transit hub, where two subway lines, the JFK Airport AirTrain and ten Long Island Rail Road lines intersect.

The site, which was purchased from the Greater Jamaica Development Corporation in 2014, will contain a 773,000 s/f property with 45,000 s/f of community and retail space and a 187-car parking garage.

The project has $407 million in funding from public and private investors. The biggest portion came from the New York City Housing Development Corporation, which provided a $323 million loan last February.

Officials say that the development will create approximately 4,000 new construction jobs. The project is expected to be completed by mid-2019.