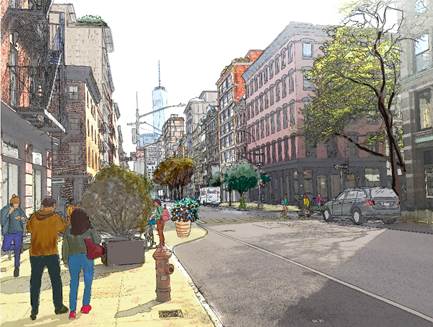 City Planning Commission (CPC) Chair Marisa Lago today announced the start of public review for the SoHo/NoHo Neighborhood Plan, the first overhaul of local zoning regulations since these communities served as a manufacturing hub half a century ago.

Despite local opposition to the rezoning, Lago asserted in a press release, “The proposal will enhance equity and affordability by opening these two lower Manhattan neighborhoods — with exceptional access to transit, schools, jobs and other amenities – to many more New Yorkers, while also enhancing the existing historical character of these vital mixed-use districts.”

The Plan would permit housing and require affordable housing in all new developments, adding as 3,500 new homes to the neighborhood, 900 of which would be permanently affordable homes via the City’s Mandatory Inclusionary Housing (MIH) program.

In addition to new homes created on vacant and underutilized land, conversion of existing non-residential space to residential would create homes, and because of MIH, a more diverse, mixed-income community, according to the CPC.

Existing rent-regulated homes, many covered by the Loft Law, will remain protected.

The proposal introduces height limits in these areas for the first time, which will result in the creation of loft-like structures, long-beloved in SoHo and NoHo. To enhance and protect the neighborhoods’ historic character and building forms, no towers will be allowed. The proposal’s height limits include:

Outside of the historic districts and along Canal Street and the Bowery, “Opportunity Areas” allow increased density and a maximum height of 275 feet, which is appropriate to the existing context. In comparison, the tallest existing building in the “SoHo West” Opportunity Zone is the approximately 400-foot Telephone Building.

Along historic district commercial corridors, including Broadway, the maximum height proposed is 205 feet.

In the historic cores of the proposed project areas, maximum height is proposed at 145 feet.

New York City Landmarks Preservation Commission’s review and certification of appropriateness remains unchanged throughout the historic districts, which is about 85% of total rezoning area.

The proposal seeks to support the legacy of arts and culture in and around SoHo and NoHo over the long-term via a new arts fund model. The arts fund creates a mechanism for those living in Joint Living Work Quarters for Artists (JLWQA) who wish to convert to a residential use through a contribution to a neighborhood arts fund. This is completely optional and up to the JLWQA tenant, expanding the choices available to them. The JLWQA program will also remain an option for certified artists in perpetuity.

The arts fund will be overseen by DCLA and its designated partners. The fund will be built up over time and allocated in ways that invest in existing and new cultural infrastructure that enhance the public presence of the arts and propel the cultural legacies of these communities for generations to come. The fund will be designed flexibly to meet the goal of expanding access to cultural amenities in SoHo and NoHo and the surrounding lower Manhattan communities below 14th Street.

The arts fund model presents an opportunity to enhance the public presence of the arts and DCP and DCLA look forward to continuing to work with existing cultural communities in the area and other stakeholders to further develop the proposed arts fund.

The proposal will also introduce sensible use rules that recognize SoHo/NoHo’s status as a major economic engine and retail destination and support post-pandemic recovery.

The proposed changes would cover an area generally bounded by Canal Street to the south, Houston Street and Astor Place to the north, Lafayette Street and the Bowery to the east, and Sixth Avenue and West Broadway to the west. The area is currently mapped with zoning districts found only in the SoHo and NoHo neighborhoods and which date to the early 1970s, when vacant manufacturing buildings were being repurposed by artists and others drawn to the neighborhoods’ versatile and affordable lofts.

Manhattan Community Board 2 has 60 days to review the proposal, after which it will go to the Borough President, back to the City Planning Commission and ultimately to the City Council as part of the City’s Uniform Land Use Review Procedure (ULURP).

“Every New Yorker should have the opportunity to live in transit-rich, amenity-filled neighborhoods like SoHo and NoHo. Built on years of community engagement, this proposal was crafted with a lens focused on fair housing, an equitable recovery from the COVID-19 pandemic, reinforcing SoHo/NoHo as a regional hub for jobs and commerce, and preserving and augmenting the arts. Through permanently affordable housing requirements and support for the arts, this plan is a giant step forward towards a more equitable and even livelier New York City,” said CPC Chair Marisa Lago.

Despite today’s certification of the plan by CPC, opposition has grown in recent weeks, including from Chinatown/social justice groups, citywide tenant/housing groups, former members of the city’s Landmarks Preservation Commission, the Municipal Art and the National Trust for Historic Preservation and the Preservation League of New York State.

“ High up on that list is a massive giveaway of real estate development rights in SoHo, NoHo, and Chinatown to his generous donors like Edison Properties, which will enable them to build enormous office buildings, big-box chain retail stores, and super-luxury condos where current rules prohibit them from doing so.

“Wrapped in a false veneer of affordable housing and social justice equity, de Blasio’s SoHo/NoHo proposal is a fire-sale giveaway of enormously valuable real estate that will destroy hundreds of units of existing affordable housing and create few if any new ones; displace hundreds of lower-income residents and residents of color; make these neighborhoods richer, more expensive, and less diverse than they are now; and destroy locally and nationally recognized historic neighborhoods while pushing out the remaining independent small businesses with a flood of big-box chain retail.”

n March, Village Preservation released a study analyzing the city’s plan that showed that it would also incentivize the demolition of hundreds of existing units of affordable rent-regulated housing in the area..