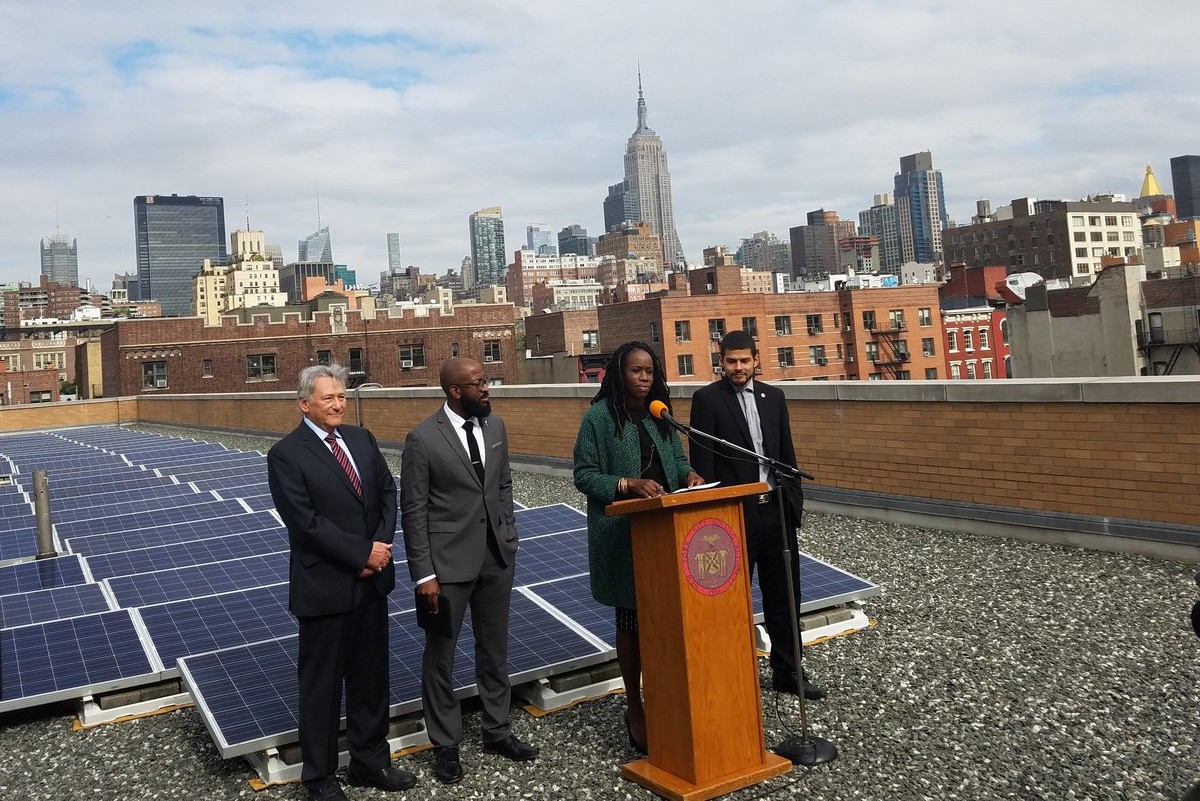 The program will provide low to moderate-income New Yorkers, including public housing residents, access to clean, low-cost energy throughout the city and jobs in the growing solar industry.

The Authority has issued its first Request for Proposals, seeking developers to install solar power at 14 developments throughout the five boroughs.

NYCHA’s goal is to install 25 megawatts of solar capacity, which would power up to 6,600 households, by 2025. This builds upon the expansion of solar installations in New York, which has quadrupled under the Mayor’s leadership.

NYCHA’s solar program will be instrumental in meeting the city’s goal to reduce greenhouse gas emissions 80 percent by 2050.

It will also contribute to the U.S. Department of Housing and Urban Development’s Renew300 initiative, whose goal is to install 300MW of renewable energy capacity at federally assisted housing by 2020.

“New York’s largest landlord is ready to lead the charge on renewable energy. With this unprecedented investment, the City is reducing its carbon footprint and building more resilient communities for the 400,000 New Yorkers who call NYCHA home. We are fulfilling our commitment to strengthen public housing for years to come,” said Mayor Bill de Blasio.

“NYCHA is an indispensable part of the City’s climate plan as the largest residential landlord,” said NYCHA Chair and CEO Shola Olatoye.

“Today, we are taking an important first step towards putting solar power within reach for thousands of working families, which is essential to achieving NextGeneration NYCHA’s goal of creating safe, clean and connected communities. We’re changing the way we do business to protect future generations and improve quality of life for the 1 in 14 New Yorkers who call NYCHA home.”

Since the release of its Sustainability Agenda last year, NYCHA has been working with government and private sector partners to provide better service for residents, reduce energy and costs, and curb the effects of climate change.

This investment also helps NYCHA achieve deeper emission cuts, and supports their progress in the NYC Carbon Challenge, a voluntary effort to reduce emissions by 30 percent or more over 10 years.

Supported by Sustainable CUNY of the City University of New York and the consulting firm ICF, NYCHA evaluated more than 2,500 rooftops to determine potential solar capacity, considering factors such as the age and condition of the roof, usable roof space, height, and shading.

The Authority also looked at parking lots, where solar canopies could be placed over the parking area. Based on these criteria,

NYCHA identified 190 developments for large-scale solar development, which will be grouped into several RFP batches and released over the next 7 years.

This first RFP, which includes 14 developments, calls for the installation of two to six megawatts of solar capacity, which is equivalent to powering between 500 and 1,600 households.

NYCHA will lease the sites, which include both rooftops and parking lots, for up to 25 years. The solar developer(s) will install, operate and maintain the solar systems and sell the power to low to moderate-income residents throughout the city.