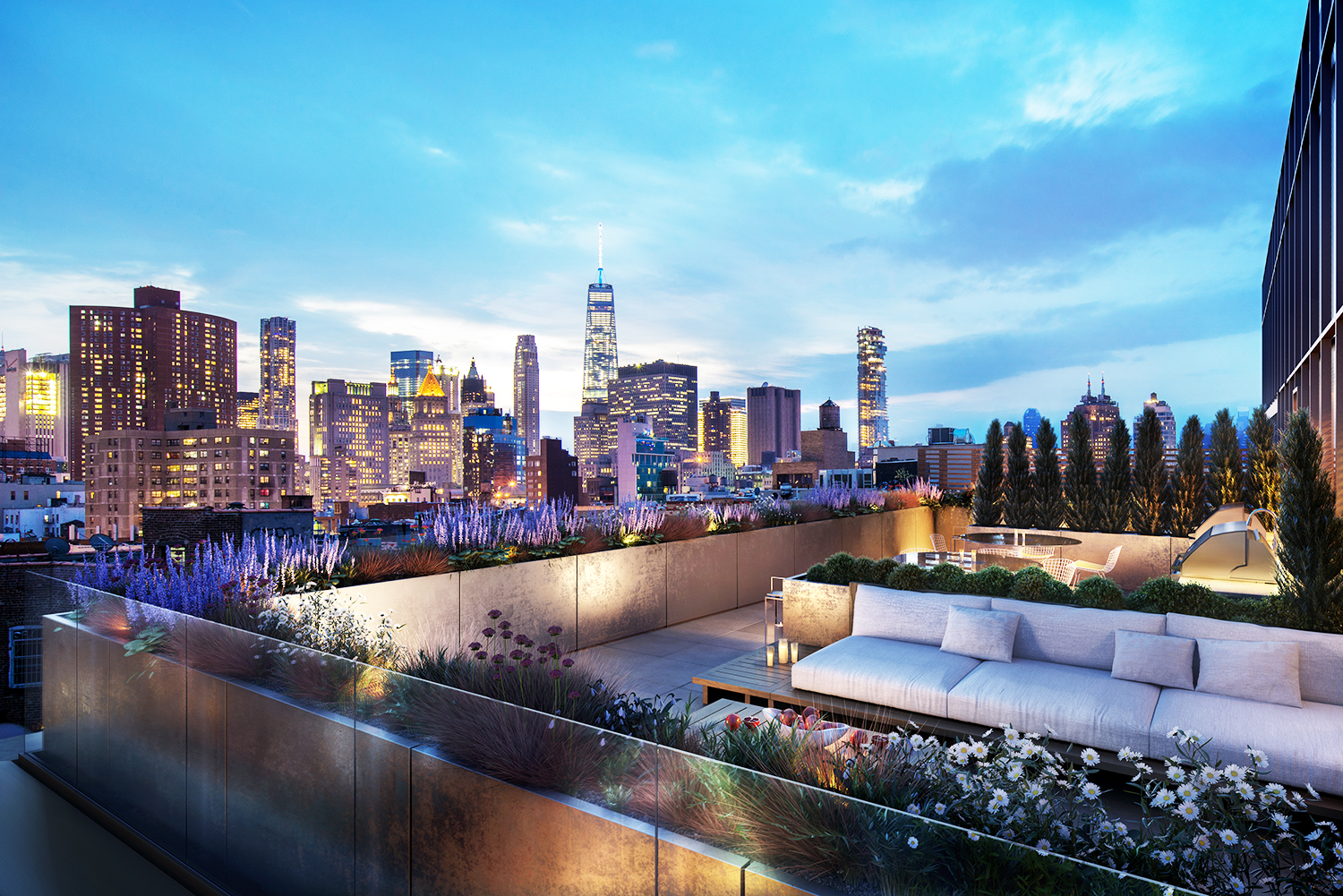 A look at 242 Broome, the first of nine buildings planned at Essex Crossing

At 14-stories tall, 242 Broome, the first of nine planned buildings in the Essex Crossing mixed-use development, stands out in more ways than one.

First, there’s the literal sense of the phrase, as it towers above most of its neighboring buildings and provides clear vistas in all directions; of Midtown, the Financial District, waterfront Brooklyn and even bits of New Jersey.

It is a luxury high-rise stocked with million- and multimillion-dollar condos in the heart of what was for years the low-rent landing ground for the city’s poorest immigrants.

In fact, the Douglas Elliman sales office that services the building is located across the street from the Tenement Museum, which commemorates an age when families occupied apartments that were smaller than certain bedrooms in 242 Broome.

The billion-dollar brainchild of developer Delancey Street Associates (a collaboration between L & M Development Partners, BFC Partners, and Taconic), Essex Crossing will eventually feature six main buildings, all south of Delancey Street, each with mixed residential and commercial uses, including at least one anchor feature, be it a bowling alley in the basement, an attached movie theater, an onsite medical center or direct access to newly created park space.

In the case of 242 Broome, which includes 55 one-, two- and three-bedroom condo units, residents will have access to a newly-built museum that, while aesthetically different, is attached to the main portion of the building.

Just last week, the International Center of Photography announced that it has signed on to fill the space with its popular museum, school and other facilities.

ICP said it will combine its museum and school into one facility housed on Ludlow Street and expects to relocate the museum in early 2019, followed by the school, which serves more than 3,500 students annually.

ICP’s new home will be a four-story building, running a full city block between Ludlow and Essex, with interiors designed by Gensler. The center will also occupy two additional floors at 242 Broome, which was designed by SHoP architects.

“The addition of the International Center of Photography is a key milestone in the development of Essex Crossing, which calls for space dedicated to community and cultural facilities separate from the commercial and retail tenants and housing expected to fill the project,” said Stroock real estate partner Karen Scanna, who along with Ross Moskowitz, represents the development group behind Essex Crossing. DLA Piper represented the museum in the negotiations for the new space.

“We are thrilled to be reuniting the ICP Museum and the ICP School under one roof. This is something towards which we’ve been working for nearly 20 years,” said ICP Board president Jeffrey Rosen and ICP Board chair Caryl Englander. “It’s gratifying to bring this exciting goal to
fruition.”

Paul Pariser, co-chief executive officer of Taconic Investment Partners, said, “From the very beginning, we’ve been committed to building a project that both reflects and enhances the rich cultural tradition of the Lower East Side.

“Aligning our cultural goals with the Lower East Side’s burgeoning arts scene wasn’t a simple task: we wanted to find a world-class institution, but also an organization that would be accessible to the community, from practicing artists to schoolchildren and their families. ICP will deliver that rare blend to the LES, and really help make Essex Crossing the beating cultural heart of the neighborhood.”

Standing four stories high, the museum is to the north of the tower and will feature a black, metallic façade with a fish-scale aesthetic.

Meanwhile, the recently completed fascia of the residential section gives the building a slanted look, which made construction more difficult because it required the use of angled columns, Taconic senior associate Ben Baccash said. However, it was all part of the developer’s plan to use Essex Crossing to push the boundaries of the area.

“The design tries to walk that fine line of being new and interesting while still respecting the character of the neighborhood,” Baccash said. “We also didn’t want them all to look the same; we wanted them to be unique and varied because the Lower East Side is so varied.”

Inside 242 Broome, which is entering its final stages of construction, it’s clear that the stylish exterior was not built at the expense of interior function.

While some provocative building designs can create dead corners, the units in this building have no obvious dead space. With 10-foot high ceilings on all but one floor, the condos feel open and roomy, with large windows for ample light and views.

Amenities include a gym, community room, full-service porter and a delivery room with cold storage for grocery shipments.

There’s also a shared space on the roof with room for upwards of two dozen people as well as terraces around the sixth floor with hook-ups for heat, electricity and gas.

The crown jewels, however, are the three penthouses — a two-bedroom and a pair of three-bedrooms — which each have their own slice of private rooftop real estate and the unfettered scenery that comes with them.

Two of the penthouses are two-bedrooms, one of which is under contract for $5.25 million. The three-bedroom unit is listed for $6.25 million. Sales began last fall and the developers report that nearly half the units have already been purchased.

“The product is very sophisticated, a little more grand,” he said. “It’s really the highest quality condo to come to the area to date.”