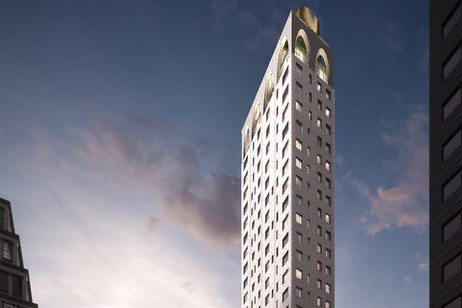 “New Yorkers have won a rare victory over developers by stopping a skyscraper in a residential neighborhood,ˮ said Brewer.

“Even when a Borough President, Council Member, Community Board, neighborhood association, and local residents pool resources, the odds may be against us, but together we can win. I am glad we stopped this loophole before it was too late.”

Added Kallos, “Thank you to Mayor Bill de Blasio and Commissioner Rick Chandler for auditing 180 East 88th Street and finding in favor of the letter from Manhattan Borough President Gale Brewer and I by issuing a stop work order and requiring a broader base for what should be a shorter building that better fits the neighborhood.”

The New York Times reported that the DOB plans to revoke permits for the building planned to be the tallest skyscraper on the Upper East Side north of 72nd Street at 521 feet.

A planning expert hired by the campaigners to examine the publicly filed paperwork reportedly found that the creation of the tiny lot along East 88th Street appeared aimed at skirting regulations, including one requiring a base for the tower running all the way to the “street wall” at 88th Street.

Oppenents claim that since DDG owns both the development site and the tiny foot lot, the development actually does front 88th Street requiring a contextual street wall with the height of the building shortened.

The DOB conducted an audit of the site and has now instructed the developer of the site to draw up new plans for the building.

“The law must apply evenly to all New Yorkers including developers,” said Council Member Kallos. “Zoning laws were created to protect our residents from overdevelopment and must not be eroded by creating new loopholes.”

“At first glance, this project looks like a prime example where the Department of Buildings has failed to enforce the law,” Brewer added. “The zoning here is what it is, not what the developer wishes it were.”

Under city zoning laws for the area, development on Third Avenue between 87th and 88th Street is not allowed to have skyscraper towers and instead can only have tower-on-a-base buildings with 55 percent of the floor area under 150 feet and a base between 60 and 85 feet that extends continuously around the street wall.

“The shaving off of a tiny piece of the lot to avoid the zoning requirements is, in my experience, novel,” said George M. Janes founder of George M. Janes & Associates, who examined the plans for the opponents.

“I am worried that if this strategy becomes widespread the intent of the zoning resolution will be undermined.”

Skyscraper owners should think big when it comes to solar power