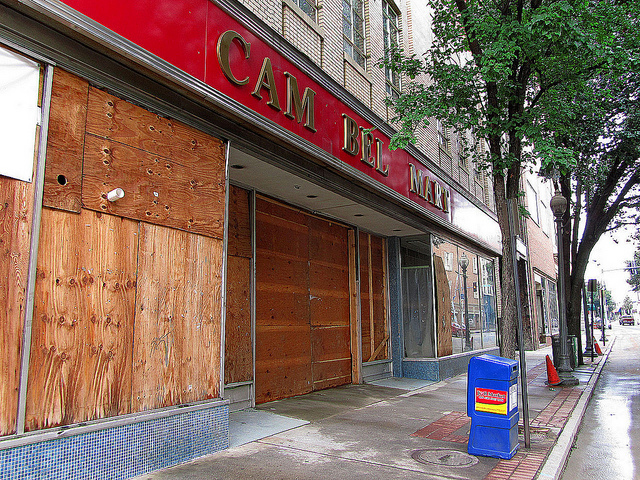 There were suggestions from Council members on ideas like restricting the ability of chains from opening (though this was shot down by city planners) and discussion on how to get businesses to open in neighborhoods that are currently underserved.

At the hearing, which was co-chaired by Small Business Committee Chair Robert Cornegy and Zoning and Franchise Sub-Committee Chair Council Member Donovan Richards, the Council members brought up “high rent blight,” a term coined by Columbia Professor Tim Wu to describe the warehousing of retail spaces by speculative landlords that’s led to many storefronts remaining empty for long periods.

“As Frank Sinatra once said, ‘If you make it here you can make it anywhere,’” said Cornegy, “but it seems that now real estate is so hot that even businesses who’ve made it (are closing).

“People have less and less interaction with bank tellers and we have banks on every block. We have commercial corridors with artificially inflated prices.”

The other issue, which the Small Business Committee and Zoning and Franchise Sub-Committee raised in a report released earlier this month, was how at the same time, low-income communities were suffering from a lack of quality retail, including retail businesses serving basic needs.

This was happening, predominantly, the report added, in black communities.

To combat this situation, Cornegy said he had no problem with chains moving in.

“For such communities, chain stores provide stable service and jobs,” he said. He then noted how 100 years ago, small grocers rallied against A&P. “A&P was seen as a threat to their existence,” said Cornegy.

But with the company now bankrupt, he added, the former supermarket giant is now viewed quite differently. “Ironically what was seen as a threat is now seen as a necessity.”

In the report, as well as at the hearing, the discussion revolved around tactics aimed at promoting retail diversity that have been tried in other municipalities.

One option mentioned was using zoning to cut down on “formula businesses,” more commonly known as chains, restrictions that were adopted by San Francisco in 2004.

But representatives from the Department of City Planning, a couple of whom gave testimony, argued against doing this. According to lead retail planner Laura Smith, many stores that appear to be chains are actually franchises.

“This would not be a good way to ensure vibrant streets,” Smith said. “For individuals looking to start their own businesses, franchises are one option. Ace Hardware, Dunkin Donuts, 7-Eleven, those are characterized as chains but are independently owned, often by immigrants.”

She added that these businesses often provide employment to people of color and are “gateways” to owning other businesses.

Smith also said that the city looks at businesses for their functions rather than who owns them, claiming the legality of the latter would be “questionable.

“From our standpoint, it’s a land use perspective,” she said. “A coffee shop is a coffee shop regardless of who owns it. It’s not for us to weigh the merits of one owner over another.”

She also argued that zoning “is a blunt tool,” something that doesn’t get changed quickly or easily, certainly not enough to keep up with shifts in the streetscape.

“It’s not the best tool to respond to market dynamics… We are extremely mindful of unintended consequences.”

Further, she argued, there are people who like chains. “Chain stores are open for longer hours and offer goods at more affordable prices and often hire locally,” Smith said.

In response to the concern of certain communities being underserved, the report proposed lifting commercial use restrictions in those areas. One example given was NYCHA properties, since most of them are not currently zoned for retail.

At the hearing, Smith said the city is working “from a zoning standpoint” with NYCHA to expand commercial uses on campuses in East Harlem. However, she added that any incentives for business growth “are things the community has to be comfortable accepting as an incentive.”

Asked by Cornegy about the city’s definition of retail diversity, Smith said this meant a variety of business types like tax prep and day care.

“We have a sense of what the right balance is and low vacancy rate is a part of that,” said Smith. “We sort of know it when we see it.”

Council Member Donovan Richards said he thought “absentee landlords” who rent to “fly-by-night companies” were to blame for the problem of blight in under-served areas. He also wondered aloud how places like Starbucks could open, without “pushing out a local coffee shop.”

When Cornegy asked about landlords who warehouse properties, and if they should face some sort of penalty, senior city housing planner Barry Dinerstein indicated that wouldn’t always work, because vacancies aren’t always intentional.

“In some cases, a landlord is gaming the system, but there are other things going on,” Dinerstein said. “Bad management, a landlord who can’t get their act together. People live in Florida and forget about the property. Other times you have a situation where the owner has died and the family is fighting.

“{It’s not necessarily about someone trying to get high rent. We really have to get a fuller picture of what’s going on before we jump into something that might have unintended consequences.”

Hearing this, Cornegy said he’d volunteer to do an assessment of the city’s vacant commercial properties. He also proposed forming a task force.

“I have heard from every council member about this issue,” said Cornegy. “It’s higher in gentrifying areas but consistently across the city essential services are shuttered and nothing opens for three years. It becomes an eyesore and (hotbeds) of criminal behavior.”

Richards then suggested a “vacancy tax.” He added, “Some of these properties will move if the city gets more aggressive.” He spoke about how he recently met with a building owner in Far Rockaway who has 15 vacant properties.

“She’s just starting to move on that,” he said, adding, “She forgot about them and we should not allow her to forget about it as a city.”

Cornegy said he didn’t want to be “punitive from the onset,” but only “when it’s necessary.”

Yet another proposal was to expand FRESH, which is a city initiative aimed at incentivizing the opening of fresh food stores in areas that are lacking them, to other types of businesses.

Smith at one point touted the program to mention that since its inception, 11 new supermarkets have been created with 12 more in the pipeline. “Where it exists today, it’s successful,” she said.

Another idea proposed was limiting  frontage lengths of ground floor retail, which, though the report acknowledged, hasn’t yet been proven to have a significant effect on retail diversity or affordability, has been done in other cities like Madison, Wisconsin and Easthampton, Massachusetts.

In New York City, there have been caps placed on sizes of businesses in manufacturing zones for decades and, as of 2012, in commercial corridors on the Upper West Side.

Smith said in that neighborhood, the restrictions have been successful in that “we’ve gotten questions from banks who then don’t open. That we could consider successful.”

“The other things we can talk about all day long, but this is the first and this is the easiest fix,” Koo said.

He added that in his district in Queens, there’s very little in the way of retail vacancy. The problem he hears about from small businesses is burdensome regulations as well as the shift toward online shopping.

“Now we can buy things from Amazon at 8 p.m. and it’s delivered to your door in the morning,” said Koo. He then called for the city to ease up on regulations for retailers and create incentives.

“They’re under too many regulations, under three or four different agencies’ supervision so it’s hard for a business to concentrate on making money. Higher minimum wage, paid sick leave. All of this adds up. For a small business owner, if he doesn’t make money he closes the door.”

On his suggestions, Smith replied, “We hear you,” and added, “We have to think about how the fundamental ways people shop are effecting us on the ground floor.”

Absent from the discussion however was the Small Business Jobs and Survival Act (SBJSA), prompting those in favor of the controversial legislation aimed at giving businesses automatic ten-year lease extensions, to hold a rally before the hearing.

Harry Bubbins of the Greenwich Village Historic Preservation Society, who was at the rally later gave testimony.

Without the legislation, Bubbins said, “Negotiations are more like a shakedown. We need legislation aside from zoning measures as soon as possible.”